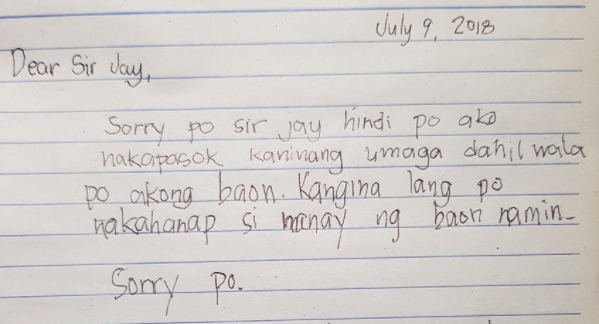 A student’s absence is glaring to any watchful teacher whose first task in the morning is usually the checking of class attendance. This was the undertaking of Christian Jay Ordoña who monitors attendance during his first period with his Grade 8 advisory class.

(Usually, when you are an adviser, your first period is with your advisory class, so that you can monitor their attendance. You get to see who went to school and who did not.)

Ordoña shared to INQUIRER.net today, July 12, that he is a Filipino teacher in Bongabon National High School in Baranggay Sinipit, Bongabon, Nueva Ecija. And it just so happened that on the Monday morning of July 9, one of his students failed to make it to class.

(After class, a student suddenly approached me and handed a letter. The student was even shy and whispered.)

Ordoña’s student apparently whispered to him, “Sir, hindi po ako nakapasok kanina.” (Sir, I was not able to come to school earlier.)

Ordoña recalled that he told her, “Oo nga hinahanap kita kanina sa first period pero wala ka nga. Bakit ba?” (Yes, I was looking for you during the first period, but you were not present. Why?)

His student then gave him a handwritten letter, which bore the reason why she failed to make it to first period that day.

(Dear sir Jay, I am sorry I missed class this morning, because I had no provisions. I’m sorry. Respectfully [name redacted].)

Ordoña’s post has since made the rounds on social media, and so far has amassed around 57,000 likes and 16,000 shares, with the netizens’ reactions echoing Ordoña’s own sentiments. To a reader, his student’s letter hits hard knowing it came from a child who’s affected with things beyond her control.

But just as how Ordoña’s post spread like wildfire and caught the attention of netizens, the goodwill that was sent their way came just as fast.

Today, July 12, Ordoña took to his Facebook once more to post an update about his student who, up until this point, still remained nameless and faceless.

Ordoña shared a selfie with his student, who smiled up at the camera. Marinel is her name.

(One of the many things that cannot be equaled among the responsibilities of a teacher is that of being able to help and change the life of a student.)

(It all started with a simple letter. No one knew it can change the life of a child who only wanted to study. She would be lucky to attend class with something in her pocket, which would sustain her body and mind throughout the whole day in school.)

(Through the help of people who did not think twice to give help, my student Marinel is now able to go to school with enthusiasm everyday.)

(For now, without hesitation and fear, she carries a new hope and her big dream of studying.)

Nueva Ecija is known to have one of the highest poverty incidences among Philippine provinces at 22.6 percent. In the 2015 report of the Philippine Statistics Authority, it showed that the highest educational attainment of most Nueva Ecijans is only high school, followed by elementary. JB