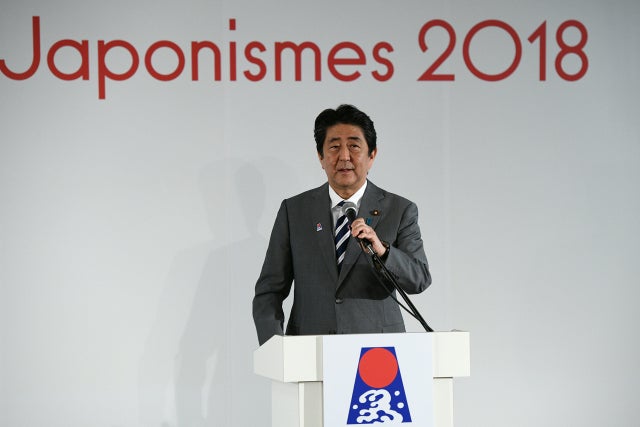 Since Impressionist artists first clapped eyes on woodblock prints, Japan has been a source of both inspiration and fascination for many in France, which Tokyo has picked for a mammoth cultural offensive.

“There were other candidates, like Moscow or Spain, but it’s the French, more than any other nation, who know Japanese culture the best,” said Korehito Masuda, director of the “Japonismes 2018” program.

From Gagaku imperial military music to the disconcerting works of contemporary artist Kohei Nawa, the cycle of 67 exhibits and performances aims to highlight Japan’s cultural vibrancy on a scale rarely seen outside the country.

“We wanted to show the continuity of Japanese traditions up to the current day, with the integration of traditional art and technology,” Masuda said.

Tokyo, which has invested more than 30 million euros (about P2 billion) in the project, also has a more prosaic ambition: Keeping up with a concerted push by longtime rival China to promote its artistic heritage.

Yet specialists say in France at least, Japan’s place in the popular imagination remains secure.

In a sign of the French fascination with the Land of the Rising Sun, this year’s edition of the annual Japan Expo in Paris received 250,000 visitors.

French youths, meanwhile, have long been avid manga readers and star Japanese chefs are the toast of the French gastronomic scene.

“It might have seemed that with the huge cultural investments by China that interest in Japan would suffer, but that hasn’t been the case,” said Michael Lucken, director of France’s National Institute for Eastern Languages and Civilizations.

Underscoring the importance given to the French shows by Tokyo, Prime Minister Shinzo Abe was to attend Thursday’s inauguration alongside President Emmanuel Macron, before cancelling because of the recent deadly flooding in Japan.

“There’s a love story between France and Japan” which began shortly after the two countries established diplomatic relations in 1858, said Beatrice Quette, curator of the Asian collections at the Museum of Decorative Arts in Paris.

From the composer Debussy to the poet Baudelaire to painters including Van Gogh and Monet, 19th-century artists were enthralled with “Japanism” and the possibilities it offered their work.

More recently, former president Jacques Chirac was an ardent fan of Japanese art — as well as sumo wrestling — and traveled to the country dozens of times.

Japanese influence also set the standard in France for design, Quette said: “It has to be both beautiful and useful”.

One highlight of the events being planned for “Japonismes 2018” is the first European concert by Hatsune Miku, the computer-generated Japanese pop star who performs as a hologram and has already filled venues in Asia and North America.

Also on deck is a retrospective of films by Naomi Kawase, the first Japanese woman to sit on a Cannes Film Festival jury and a previous winner of one of the festival’s top prizes.

Performances of classical Japanese Kabuki and No theater are planned, as are electronic music and hip-hop concerts and exhibitions of ancient and modern creations, ranging from 11,000-year-old pottery to dresses from the cutting-edge label Anrealage.

To cap it all, the Eiffel Tower will be bathed in the red and white of the Japanese flag for two nights in September. AB