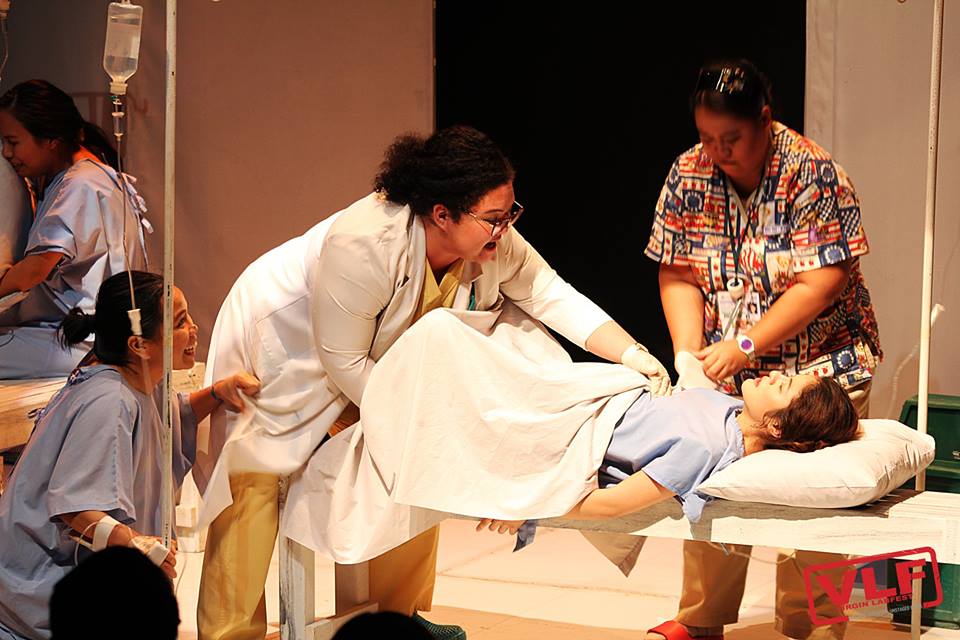 Scene from “Labor Room,” written by Ma. Cecilia dela Rosa and directed by José Estrella and Issa Lopez—one of 12 new plays presented at the 14th Virgin Labfest, which has remaining performances today and tomorrow at various Cultural Center of the Philippines venues. PHOTOS FROM VIRGIN LABFEST’S FACEBOOK PAGE

From playful to powerful: VLF 14’s peek at fresh worlds and stories

It’s that time of the year for the magic 12 of the Virgin Labfest (VLF)—handpicked from 150 “untried, untested and unstaged” plays submitted this year, and showcasing the freshest bits of Filipino theater.

Now on its 14th year, the 2018 Virgin Labfest celebrates the theme silip (peek)—and peek it did into the surreptitious world of our untold stories.

This silip slips into fond nostalgia in José Dennis Teodosio’s “Rosas.” Anding (Crispin Pineda) relives the old days with Merto (Bembol Roco) at their lonely Home for the Aged nook. The simplistic set—two rickety swings with peeling paint—
contrasts beautifully with the notion of roses: in bloom, waxed by Merto’s poetic tongue, Edith Piaf’s “La Vie en Rose” in the background. The play, however, gets weighed down by syrupy dialogue bordering on the soporific.

A more brazen silip is seen in “River Lethe,” Allan Lopez’s titular allusion to a mythical site where people drink to forget. A terminally ill couple (Paolo O’ Hara and Dolly de Leon) engage in a raunchy hotel romp, eschewing questions about their relationship in exchange for uninhibited sex. Director Chris Martinez infuses the show with a palpable sense of despair and vulnerability, though superfluous interludes, like the three gyrating staff, mar the proceedings.

Silip takes on a more sinister tone in “Mga Eksena sa Buhay ng Kontrabida,” Dustin Celestino’s look at the life of a scoundrel (Jay Gonzaga). Gonzaga’s intensity topbills a thought-provoking plot that skillfully skirts the thin line between hero and villain, and yet manages to elicit empathy. Roobak Valle’s compact direction cleverly zeroes in on two characters at a time; however, it also ends up a case of too much finger-pointing that ultimately leaves some loose ends.

The oft-maligned riles provides a common backdrop for two productions. “Ang Mga Propesyunal” paints an ambitious satire on what is essentially the current state of affairs in the country. Three kids, role-playing their dream jobs, square off against another over various truths and falsehoods. Sari Saysay’s script drips with wry arguments spanning Mocha, Mayon, Kuwait and Norwegia, but occasionally wobbles in its deliberate indistinction between real and make-believe.

In “Amoy Pulbos ang mga Alabok sa Ilalim ng Riles ng Tren,” Lino Balmes examines the harsh social realities of a destitute couple summoned to the glitzy “Pera O Bayong” stage. The production’s premise and originality (trains symbolizing transitions) are praiseworthy, if impaired by haphazard storytelling. The duo is oftentimes reduced to a bumbling mess of loud-mouthed tirades. Still, “Pulbos” successfully fleshes out a nation’s fanaticism for noontime shows, and the unspeakable measures people undertake to eke out a living.

Sibling dynamics figure prominently in two other productions. JV Ibesate and Olive Nieto’s “Tulad ng Dati” chronicles the poignant reunion of two brothers (Arnold Reyes and Acey Aguilar). Reyes valiantly dons a veil of remorse in his stirring performance, but he can only do so much with a script that vacillates between awkward swear words and prolonged silences. The final straw is the woefully abrupt resolution, a twist that could have fared better with a more robust, more stretched-out exploration.

The brotherly relationship in “Mga Bata sa Selda 43,” meanwhile, features shades of sci-fi in a whitewashed cell that hints at an otherworldly realm. Philip (Tomas Santos) and Ino (JM Canlas) while away the hours in long-winded conversations that eventually grow dull and tired. Rolin Migyuel Cadallo Obina’s plot redeems itself with a relevant revelation, although launched in the form of an arduous expository piece marked by implausibleness.

A different kind of family drama unfolds in “Ang Inyong Mga Anak: Si Harold at Napoleon.” Anthony Kim Vergara focuses on a mother-son tandem’s political views, and the result is a play laudable for its rousing patriotism and ingenious use of poetry. Still, the technique becomes the show’s Achilles heel, with an ending that lapses into melodramatic territory.

The festival’s lone musical, penned by Tyron Casumpang, dwells on a hefty topic—the Marawi siege and a volunteer kitchen brigade tasked to feed evacuees and refugees from the war. Unfortunately, even Jonathan Tadioan’s colossal stage presence is not enough to salvage a production that teeters like a flimsy refugee tent. In spite of its noble intentions, the show suffers from a disjointed storyline, thinly carved characters and uninspired choreography. It regresses into one huge sermon for peace, with trite platitudes (“Bangon Marawi”), children chanting in unison, and bombshell blasts utilized for dramatic effect.

When all else is said and done, three plays stand head and shoulders above the rest as contenders for the Labfest’s Revisited set next year.

Carlo Vergara’s “Edgar Allan Hemingway,” directed by George de Jesus, hands a playful jab at two of literature’s most respected giants. The highlight of the show is Ricci Chan as a deliciously manipulative lover, in a performance that exudes impeccable rib-tickling chops. “Hemingway” is a worthy addition to Vergara’s other acclaimed Labfest entries (“Mula sa Kulimliman,” “Kung Paano Ako Naging Leading Lady”); and, while his characters here are less realized, it nevertheless cements his versatility with an equally riveting story of frustration, desperation and one’s bitter quest for survival.

Finally, Juan Ekis’ “Ensayo” is a similar mini-masterpiece in topnotch comedy and coherent, no-frills storytelling. Lolo Peds (Bembol Roco) and Lola Tisha (Sherry Lara) fuss over rehearsing a kiss for their first-ever acting workshop. From this straightforward dilemma, Ekis creates a charming plot of two individuals easing themselves into uncharted territory in their old age, complete with fluid banter and dry sarcasm. Director Eric Villanueva dela Cruz conjures magnetic chemistry between the veteran actors, who both convey an effortless blend of coyness and confidence.