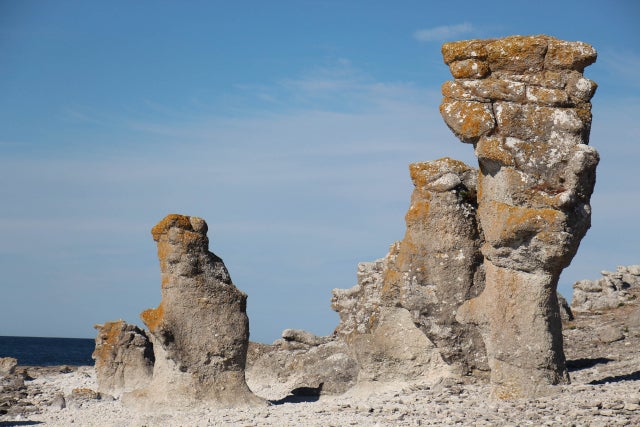 Endless winters, sparse pine trees rising from infertile soil, few sheep and even fewer people: the Baltic island of Faro is not only a natural film set for Ingmar Bergman, but his sanctuary and final resting place.

Here on this stony island, where fishermen and peasants settled centuries ago, Bergman is buried next to his wife Ingrid von Rosen at a site which has turned into a place of pilgrimage for his admirers.

The director was already an internationally-acclaimed star when he explored Faro for the first time in 1960 while trying to find a location for “Through a Glass Darkly”.

There he discovered the island’s pebble beaches, distinctive rock formations, bogs and meager pastures, its ports, church and lighthouse.

“It was love at first sight,” he wrote on exploring Faro which lies just off the northern tip of Gotland, Sweden’s largest island, and stretches 110 square kilometers (around 42 square miles).

Until 1998, Faro was off-limits to foreigners as a protected military zone.

“This is your landscape, Bergman. It corresponds to your innermost imaginings of forms, proportions, colors, horizons, sounds, silences, lights and reflections,” he wrote in his autobiography, “The Magic Lantern”.

He also made two documentaries, paying tribute to the workers he employed at his estate, who would also set up dolly rails for tracking shots and play extras. Some remember well the napalm fires set up to represent the horrors of war in “The Passion of Anna”.

According to one piece of local lore, Bergman paid well, so well in fact that when visitors asked where his house was, loyal islanders would usually point in the opposite direction.

‘Moliere and the Golden Helmet’

When Bergman discovered the beach at Hammars in 1966 while filming “Persona”, he decided to build a one-story house in the area.

He spent several years there with the Norwegian actress Liv Ullmann, who later spoke of her memories of enduring dark winters while Bergman isolated himself.

The artist also bought a barn and a stable which he turned into a private cinema.

There he trucked in reels of films from Stockholm, including several of his favorite works—among them “Moliere” (1978) by French director Ariane Mnouchkine and Jacques Becker’s “Golden Helmet” (1952) as well as a string of classics by Charlie Chaplin and Buster Keaton.

Several years after Bergman’s fifth and last wife Ingrid passed away in 1995, he sold his apartment in Stockholm, moving permanently to Faro in 2003.

The son of a Lutheran priest, Bergman struck up an acquaintance with local pastor Agneta Soderdahl, whom he described as having a beautiful voice.

“He once told me, ‘I knew you could sing well, but not that well’,” she told AFP, laughing at the memory as she stood outside the island’s only church.

Describing Bergman as a “skeptical believer”, she said he sought to free himself from his childhood education of religious “condemnation, punishment and morality” which left an imprint on his entire life.

His tombstone now lies under the trees at the island’s only cemetery, a little distance from the other inhabitants whom he learned to love and who loved him back.

In a documentary, he predicted a slow decline in the island population as the amount of fish and seal dwindled.

While the locals thought he was pessimistic, “the future proved him right,” says Kerstin Kalstrom, housekeeper of Bergman’s properties.

“Farmers sell their land to rich tourists and the land becomes too expensive for young people.”

But hope is not lost, she grins: “The island registered four births in 2018!”

With fewer than 500 people living there the whole year round, tourism has become vital for Faro, which is due in no insignificant part to Bergman.

Thousands of visitors come every summer to visit the Bergman Center, a cultural association which was set up in 2009 to focus on his life and achievements.

Every June, it hosts “Bergman Week” where visitors watch screenings or performances, hear a reading or attend a lecture related to his work in an event which has drawn guests such as US actor Willem Dafoe and German filmmaker Wim Wenders.

There is also the “Bergman safari” exploring his film locations, including part of a reconstructed set from “Persona”.

And the massive house at Hammars beach has been transformed into a residence for artists.

Next month, French-Danish director Mia Hansen-Love will begin making her own film called “Bergman Island”, which was inspired by her residency at the artist’s home. MKH

Are these really the greatest movies ever made?