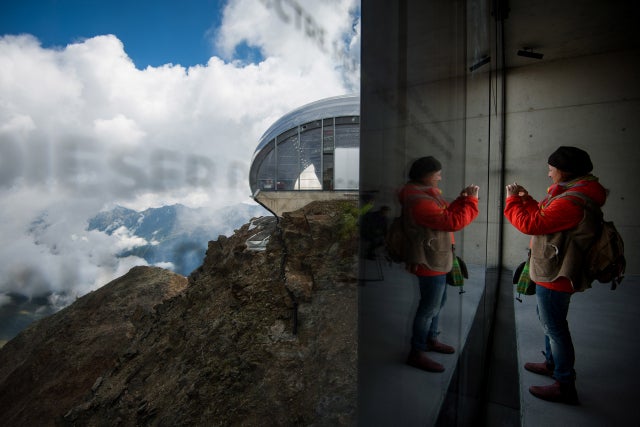 A visitor takes pictures of the view on July 11, 2018 during a visit at the James Bond cinematic installation named "007 ELEMENTS", at the top of the Gaislachkogl Mountain in Soelden in the Tyrol region in the heart of the Austrian Alps. The installation opened on July 12, 2018 in a new facility built at 3.040 metres above see level in the Ötztal Alps where the 007 movie "Spectre" (2015) has been shot. Image: VLADIMIR SIMICEK / AFP

In the last installment of his adventures, film-goers saw James Bond dice with death in the Austrian Alps.

Now in the same location, 3,000 meters above sea level, a museum dedicated to the world of the fictional spy has opened its doors.

After a vertiginous cable-car ride, visitors to the museum will be greeted by the sight of the futuristic, angular concrete structure jutting out of the sheer cliff-face, facing a panorama of dramatic peaks — the image of a secret agent’s lair.

The “007 Elements” installation, which opened this week in Austria’s Tyrol province, makes use of one of the standout locations of the last film in the franchise, 2015’s “Spectre”.

Several key scenes were shot in Soelden, one of Austria’s most famous winter sports resorts, in the heart of the Alpine Oetztal valley.

The steel-and-glass clinic where Lea Seydoux’s character works in the film is actually a gourmet restaurant next to the cable car station—which is now next to the museum. And the Oetztal Glacier Road played host to the chase between Daniel Craig’s 007 and the perennial bad guys, against a backdrop of snowy peaks.

“We thought that having an association between this exceptional location and the James Bond brand would be fantastic,” Jakob Falkner, head of the Bergbahnen Soelden ski-lift company and one of the project’s architects, told AFP.

The installation has been designed in close collaboration with the UK film company that produces the franchise and aims to give visitors an audiovisual journey through the films.

Architect Johann Obermoser explains the Bond-esque determination that was required to build the space, with part of the 1,300-square-metre (14,000-square-feet) space dug directly out of the rock, leaving most of the rooms “inside the mountain, so that you see as little as possible from the outside”.

“The idea was to feel the harshness of this landscape from inside, to feel the pressure that’s brought to bear by the elements.”

The temperature inside has to be kept below zero all year round, as the building would be at risk of collapse if the surrounding permafrost were to start to thaw.

It took just over a year to build the museum amid these hostile conditions, says Obermoser: “We had snow from August onwards; in November it was a meter (three feet) deep.”

Inside, the museum comprises a tour of nine stages through darkened rooms and tunnels equipped with giant screens and mirrors to immerse the visitor in chosen scenes from the films.

“We wanted it to feel more like a live version of going to the movies,” says Neal Callow, creative director of both the installation and most recent Bond films, adding that he has tried to recreate his work in film set design in the context of a museum, using architecture, light and sound.

Visitors will pass through the history of the franchise as represented by the different actors that have played Bond and some of the series’ most recognizable locations, before being immersed in some of the action scenes and discovering the secrets of how they were filmed.

And this being a museum about James Bond there are of course plenty of gadgets to admire along the way: watches, a gold pistol, a robotic car.

And the piece de resistance? The plane from one of the most dramatic “Spectre” scenes, suspended in pieces in front of a glass wall, with the Alpine horizon behind. MKH