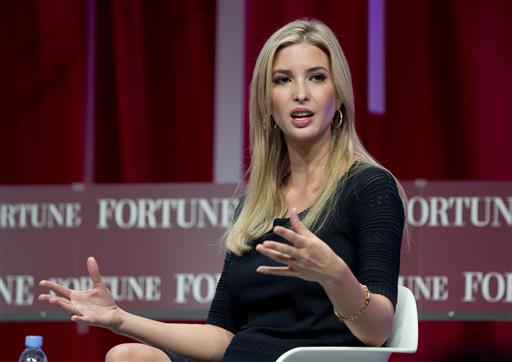 In this Oct. 14, 2015, file photo, Ivanka Trump, daughter of Republican presidential candidate Donald Trump, founder and CEO, Ivanka Trump Collection and executive vice president Development and Acquisitions The Trump Organization, speaks at the Fortune Most Powerful Women Summit in Washington. A federal lawsuit filed by Italian shoe company Aquazzura on June 21, 2016, claims Ivanka Trump is selling a knockoff of one of their shoe designs for her fashion collection. Image: AP

Ivanka Trump out of fashion at Canadian retailer

MONTREAL, Canada – Ivanka Trump’s clothing line is disappearing from the shelves of Canadian retailer Hudson’s Bay Company, the firm says, more than a year after some US department stores dropped the items.

“Hudson’s Bay is phasing out this brand through the fall based on its performance,” the company said in an email to AFP.

“As part of our regular course of business, we review our merchandise offerings and make appropriate changes,” it said, without providing other details.

Along with its Canadian stores, Hudson’s Bay holdings in Europe and North America include US retailers Saks Fifth Avenue and Lord & Taylor.

In February last year, the US fashion chain Nordstrom said it had dropped Ivanka Trump’s line of shoes and clothing. It cited slow sales after a campaign to boycott stores doing business with the family of US President Donald Trump.

Ivanka Trump serves as an adviser to her father.

The US president sparked outrage among many Canadians when, at the conclusion of a G7 summit hosted by Canada, he tweeted that Prime Minister Justin Trudeau was “very dishonest and weak.” /cbb