Someone’s in the kitchen with grandma | Inquirer Lifestyle ❮ ❯ 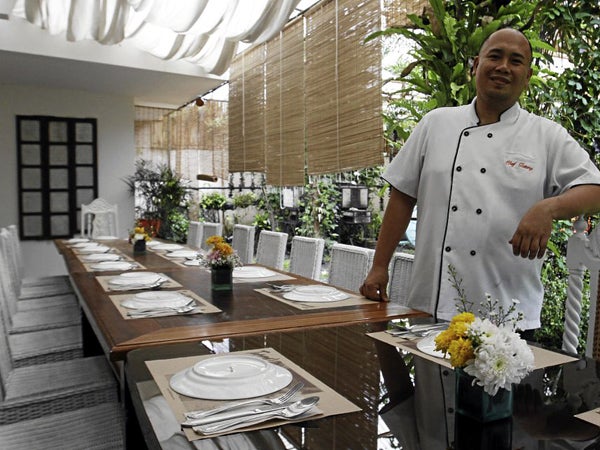 Someone’s in the kitchen with grandma

Grandmothers know best. This is true not only in life but also in the kitchen, as shared by three chefs who will definitely shine this 2012.

Myke “Tatung” Sarthou of Chef Tatung’s in Quezon City, Bruce Lim of Chef’s Table at The Fort, and Stephanie Zubiri of Atelier 317 in Makati all share how their grandmothers influenced them to cook.

Chef Tatung says of his grandmother in Cebu, “I was the only one who would watch my lola in the kitchen. Now I feel that when I cook my Filipino recipes, I am sharing a piece of our heritage.”

Chef Bruce had a similar experience in the United States with his grandmother from California by way of Pampanga. “I loved sitting on the kitchen counter watching my lola cook. I would taste everything that she would put in the pot.”

And Stephanie Zubiri who hails from Bukidnon raves, “Both my lolas are great cooks and Sunday dinners at home are legendary.”

Today, these chefs each have their own restaurants that would make their grandmothers proud. Chef Tatung’s namesake restaurant in Quezon City started out as a place where he would entertain friends from the entertainment industry. After a while, friends would start requesting for more and more dinners until the Friday dinners became a constant pre-occupation. Eventually, he decided to open his kitchen to the public strictly by reservation. But demand grew so fast that Chef Tatung’s is now a regular restaurant that welcomes walk-in customers.

It started out as a restaurant with international flair. “I never thought I would end up specializing in Filipino food,” the chef recounts. “When we started I was serving Mediterranean-European food, quite elaborate dishes. But I think you somehow look for food that you grew up with. There was a disconnect between what I was serving and what I wanted to advocate, which is promoting the produce of the local farmers who have become my friends. So eventually I found myself going back to my core, which is Filipino food.”

Chef Tatung feels that this has its merits. “I feel that through Filipino food, it would be easier for me to find a place in the hearts of my customers. When I share our heritage recipes, they are reminded of their own lolas, their own memories of the food that they grew up with.”

He says that instead of thinking out of the box, he prefers focusing on “what’s in the box.”   He notes, “People say ‘think out of the box’ but they forget that there is a box. We don’t have to put truffles in our adobo. We can use what is available, what is within our reach. For example, I make a palabok (noodle dish) using squid ink. It has a different appeal without me resorting to ingredients that need to be sourced from far away places.”

Bruce Lim came to fame by way of TV. He was in the Philippines for a vacation when a friend asked him to do a cooking segment on a morning show. After this, he was offered to do a travel show that allowed him to experience the regional flavors of the Philippine islands. He has gained popularity by way of this TV show as well as other cooking shows, among them “The Boss” on the Asian Food Channel, a regional food channel based in Singapore . He was in fact born and raised in the United States but has, since seven years ago, anchored himself back home.

Today he has Chef’s Table at Bonifacio Global City as well as Hyphy’s at Robinson’s Galleria. Beside Hyphy’s is Chef Bruce’s nationalistic side: half of the restaurant is called “Lutong Hinirang” that serves traditional Filipino fare. He remembers that his grandma’s kare-kare, embotido, morcon and kaldereta were “the best.”   The chef pays tribute to all the lolas and manangs he has met nationwide through his show at this venue. The flavors at his restaurants reveal his American side, to be sure, but he has done his share in promoting Filipino cooking at a regional level and for that alone, he must be applauded.

Stephanie Zubiri is the last person you would think would sweat it out in the kitchen. Drop dead gorgeous, animated and talkative and fashion savvy, it is easy to think that her catering business Modern Epicurean Kitchen is a business her parents gave her to at least make her do something. That couldn’t be farther from the truth.

At her latest project called Atelier 317, a tiny workshop that accepts diners by reservation, she has proven to be quite the hands-on chef, taking orders, constructing menus, organizing the dinner in her little kitchen with the assistance of a couple of other employed chefs, and even bussing out plates on occasion. She jokes that it’s her way of fulfilling her dream of waitressing but she is clearly simply passionate about what she represents.

Trained at Le Cordon Bleu in Paris, she brings a touch of Paris to her little atelier, from the interiors to the appetizers to the French neighbor who makes Manggolo coffee martinis for those who order. It’s a breath of fresh air in a metropolis where restaurants seem to be copying each others’ foie gras and rib eye menus. And don’t miss her beef adobo. People have debated on whether or not it is adobo; but it’s damn good. •

Prepare 2 grated coconuts and spread evenly over a cookie sheet. Bake in an oven at 380 degrees for 10 to 15 minutes until it develops a golden brown crust.  Allow to cool, add one cup of water and squeeze out cream. Set aside at least 2 cups.

1. Heat up a casserole and sauté garlic, onions, ginger, lemongrass, turmeric and bagoong and mix into a pasty consistency.

2. Add chicken and pour chicken stock and season with patis, sugar and pepper, cook till reduced to half.

3. Add roasted coconut cream, and allow to simmer for 30 to 40 minutes under low fire or until chicken is tender. Add okra and chilies on the last 3 minutes of cooking. Serve with toasted coconut on top.