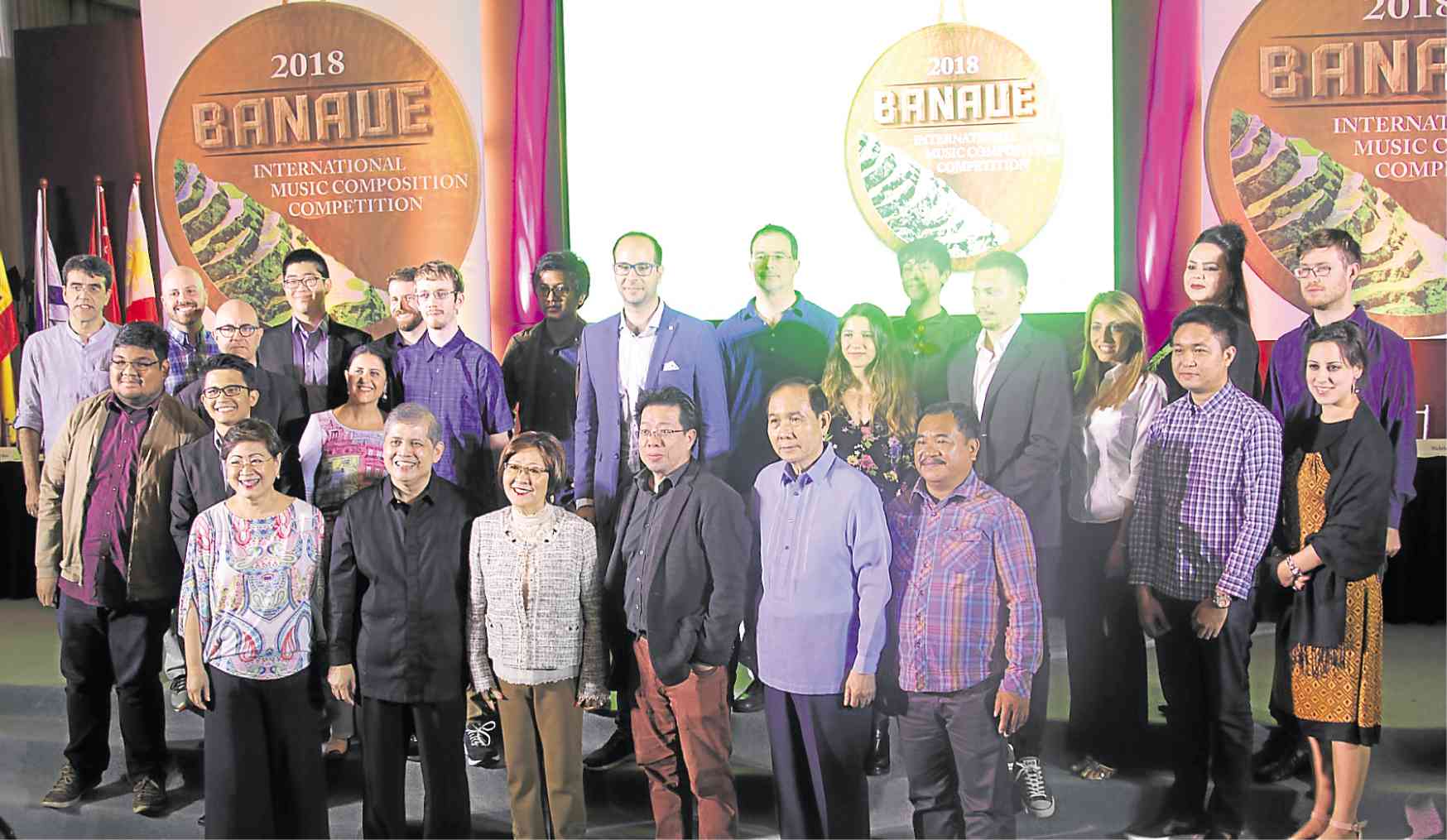 Twenty composers out of the 84 from all over the world who joined the Banaue International Music Composition Competition (BIMCC) were chosen as semifinalists and presented in a press conference recently at the Rigodon Ballroom of the Peninsula Manila.

Semifinalists come from 10 countries, including the Philippines. They are:

Ten finalists will be chosen form the 20 semifinalists and their works will be presented in a concert at Cultural Center of the Philippines on July 25, where final judging will be done.

BIMCC is organized and sponsored by the Universal Harvester Inc. (UHI), in cooperation with the Municipality of Banaue.

The contest is the brainchild of Dr. Milagros Ong-How, president and CEO of UHI that seeks to promote Philippine agriculture and the best farming technology and practices.

BIMCC seeks to highlight efforts at preserving the Banaue Rice Terraces, which is in danger of losing its inscription in the United Nations Educational, Scientific, Cultural Organization (Unesco) World Heritage List.

The rice terraces, which consist of five clusters in Banaue and Kiangan municipalities, are considered a cultural and natural heritage. They are inscribed in the Unesco list as the “Rice Terraces of the Philippine Cordilleras.”

Built through ingenious indigenous engineering some five centuries ago, the terraces have survived to this day. Rainwater is allowed to flow through the terraces that snake around 10,300 square kilometers following the natural contours of the mountains to irrigate rice plantations.

But the terraces are threatened by natural phenomena such as landslides, overpopulation and dwindling agricultural manpower.

Ong-How said it was this sad state of thrice terraces that prompted her to put up the Banaue Rice Terraces Restoration Project, headed by retired Gen. Jaime delos Santos.

Ong-How said the Banaue restoration is in response to the call for greater support to the agricultural sector, an advocacy that is carried by the agency’s other project, Tofarm, a film festival in which movies about agriculture are given seed production money by UHI.

“We are not only unlocking potentials and boosting productivity, but also preserving our heritage,” such as the Banaue Rice Terraces, said Ong-How.

Asked why she had chosen to organize a music competition to raise awareness about the need to conserve the terraces, Ong-How said that she is a music lover and is a friend of Josefino “Chino” Toledo and Luchie Roque, artistic director and coordinator of BIMCC.

In the past, too, Ong-How had helped in fostering appreciation for the works of National Artists for Music maestro Lucio San Pedro and Levi Celerio, and provided assistance to Filipino music scholars who pursued studies abroad.

She emphasized the importance of pursuing a worthy project and “enjoying while doing it.”

Delos Santos added that there was much work to be done and through the BIMCC, public support can be enlisted, by way of a cultural approach through a “celebration of music and culture.”

In the same manner, Toledo said that through music, a strong message could be sent to the public on a worldwide scale about the “beauty” of the rice terraces and the need to conserve them.

Banaue Mayor Jerry Dalipog said the contest had already raise awareness among the public as he noted a rise in the number of tourist arrivals.

Toledo said the response to the composition contest was overwhelming. Trimming down the finalists from 84 to 20 was not an easy task, he added.

The selection was primarily based on the creative quality of the works. Helping him preselect the works were Africa, professors Mauricia Borromeo and Mary Katherine Tranco and Roque.

Asked how they regarded the competition, the semifinalist composers said that it was a “veritable venue for cultural encounter; a “fusion of East and West;” a “novel experience,” and an opportunity to appreciate the culture of Banaue.

Roque said the semifinalists would be brought to Banaue for a 10-day immersion to feel the environment, see the communities and imbibe the community’s rich musical-cultural traditions. The immersion becomes an experiential approach in the final honing of their entries, which will be presented at Banaue Hotel for judging.

Roque added the semifinalists would rate the works as well, and their ratings would be added into the final scores.

Eventually, the grand winner would be Banaue and the rice terraces of the Cordilleras, said Toledo. —CONTRIBUTED