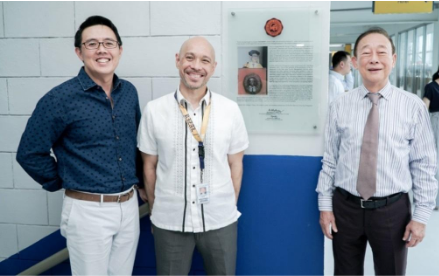 George T. Yang, Chairman and Founder of McDonald’s Philippines, was honored by Jose Rizal University (JRU) for his significant contributions in boosting local employment and nation-building as three new classrooms in the Hotel & Restaurant Management (HRM) wing, dedicated to the master franchisee of McDonald’s in the country, was unveiled.

The classrooms come with a commemorative marker citing the achievements of Yang, and details on McDonald’s Philippines’ continuous support and partnership with JRU. In 2014, the quick service restaurant signed a partnership with the university where McDonald’s committed to be a partner in ensuring the competitiveness of the students when it comes to the field of HRM. The agreement paved way for better facilities and better access to learning resources for students.

“It is a great honor for our founder George T. Yang to be recognized by Jose Rizal University for his achievements in people development through employment and corporate social responsibility programs. Since opening the first McDonald’s restaurant in the Philippines in 1981, it became his commitment to provide regular employment opportunities to working students, equipping them with life-long skills and work experience while enabling them to support their studies,” says Kenneth S. Yang, President and Chief Executive Officer of McDonald’s Philippines.

One of the highlights is the internship program entitled “Work Immersion Program (WIP)”. Through the program, JRU students are immersed in the field of restaurant operations through a combination of classroom and on-the-field curriculum at McDonald’s. To date, 166 students have graduated from the program.

George T. Yang was conferred by José Rizal University with a degree of Doctor of Humanities, Honoris Causa in 2014. Yang, through the Ronald McDonald House Charities Philippines, has also been making a positive difference in the lives of close to 12 million Filipino children since its establishment in the country in 1995. His contributions to Filipino classical music has also been recognized by JRU as well, as Yang founded the Klassikal Music Foundation (KMF), the first and only charity in the country which provides college scholarships to Filipino students studying classical music.