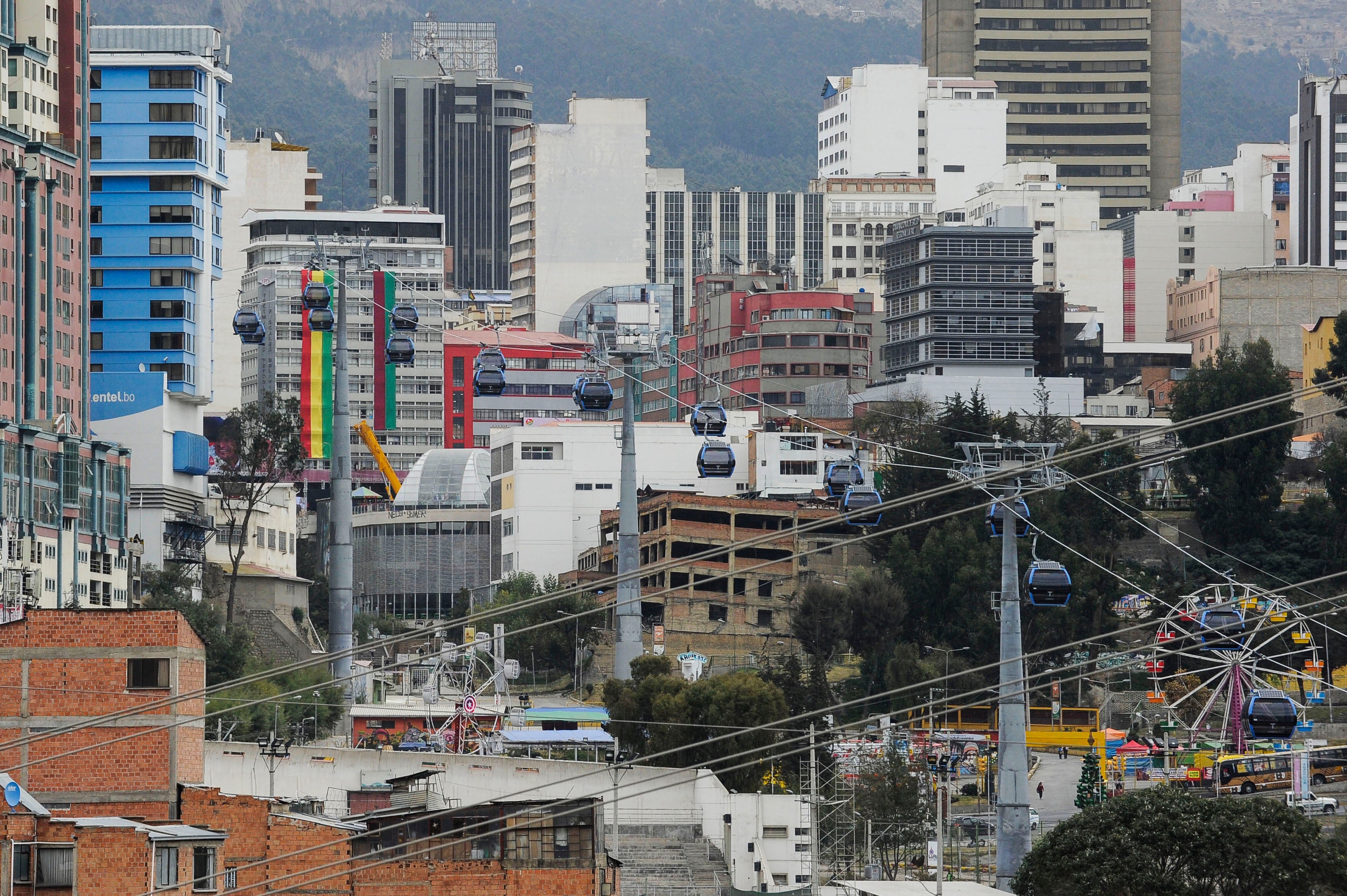 La Paz, Bolivia – “Now I’m going to get to work faster!” exulted a smiling Rosa Lima, 52, one of the first passengers on a new cable car line in La Paz that reaches into the heart of the Bolivian capital.

Draped in a bright orange blanket typically worn by indigenous people here, Rosa said she lives in a neighborhood on the southern outskirts of La Paz and that it takes her more than an hour to reach the building where she works as a cleaner in the city center.

With the new cable car line, she noted, she can be there in half the time.

The opening of the new “Celestial,” or sky blue line was timed partly as a tribute to the revolution of July 16, 1809 and to the heroes of the struggle against Spanish colonizers.

With a route from the city’s south to its administrative heart, site of the main public and private-sector offices – and above the noisy, winding and traffic-clogged streets – the line’s opening was highly anticipated.

This is the seventh line in the city’s modern cable car system, inaugurated in 2014 and with 16 kilometers (10 miles) of cable in La Paz and reaching to the mountaintop communities of El Alto, at over 4,000 meters (13,100 feet).

It is the most extensive such network anywhere, certified as such by the Guinness World Records site, according to the state-run Mi Teleferico (My Cable Car) company, which manages the system.

The new line offers excellent views of the city and of snow-capped Mount Illimani (6,462 meters or 21,200 feet), while allowing passengers to escape the capital’s steep and crowded streets.

In its four years in operation, the system has transported more than 106 million passengers. It now averages 159,000 a day.

Each line in the system is identified by a color. The first three lines opened were identified as red, yellow and green, in homage to the Bolivian flag. New lines were given the colors of white, blue, sky blue (the Celestial line), and orange, corresponding to the wiphala, the checkered banner of the indigenous people here.

The new line, inaugurated at a festive event featuring music and dance, is 2.6 kilometers (1.6 miles) long and includes 26 towers, four intermediate stations and 155 cabin cars, while connecting with other lines that lead to El Alto.

The new line is expected to be the network’s busiest and will travel 20 percent faster than other lines (86 meters or 282 feet per second), with a capacity of 4,000 passengers per hour, said Cesar Dockweiler, Mi Teleferico’s general manager.

“The line will primarily benefit public-sector employees, because the main government offices are in the city center,” he said.

Hipolito Mamani, 45, works in a government office a few blocks from a Celestial station and, like Rosa, plans to take advantage of it.

“I’m going to save a lot of time, especially when there are blockades,” he said, referring to the frequent roadblocks and closures in the city center caused by demonstrations.

Austrian company Doppelmayr oversaw the construction of the system at a cost of $750 million so far.

In the next few months, two other lines – purple and brown – will be opened, with the former also serving the city center.   /kga