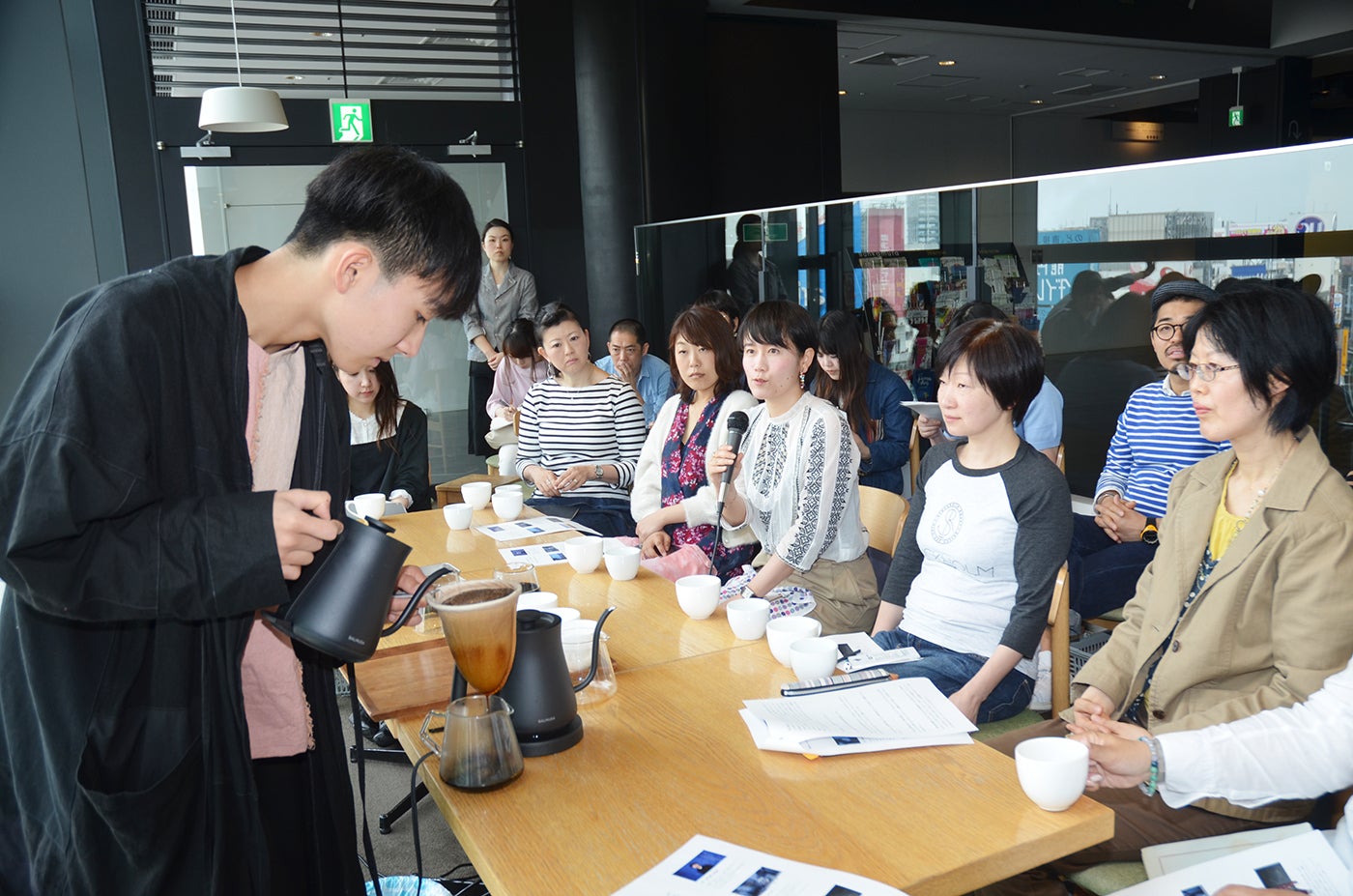 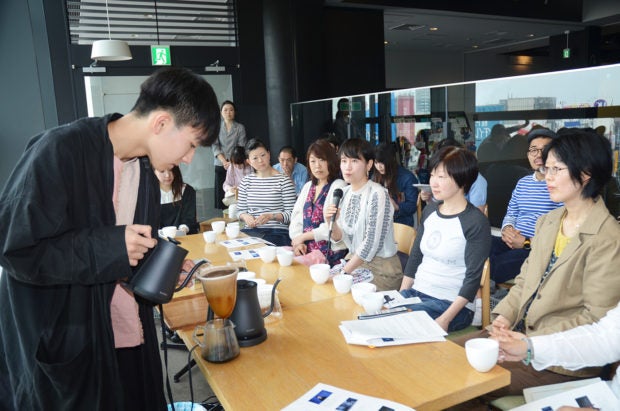 KIRYU, Japan — The coffee roasted and brewed by Hibiki Iwano doesn’t taste quite like a typical dark roast. Instead of the characteristic bitterness, it has a mild, pleasant flavor that gently soaks into one’s body and doesn’t fade even after the beverage cools down.

Iwano, 16, opened the Horizon Labo coffee shop at his home in Kiryu, Gunma Prefecture, in April last year, one month after turning 15. He had been unable to continue junior high school, and using his own original roasting techniques to launch a business was the answer to a quest for purpose by the teen, who was diagnosed with Asperger’s syndrome at around 8.

Iwano releases flavors only he can create. He’s highly focused when engaged with his passions, a characteristic that comes into play when roasting beans. Rather than relying on numerical data such as time or temperature, the young roaster uses all his senses as he “talks” to the beans he is processing, and can tell exactly when they attain the right flavor.

“When it comes to dark roast, many people think of bitter coffee,” Iwano said. “But delicious dark roasted coffee tastes sweet, not bitter. This is my starting point for developing flavors.”

Every month, Iwano sells roasted coffee with different flavors based on themes derived from inspirations in his life. This month, for example, his theme is “layers of flavors,” which was inspired by the different colors of paint applied to walls in layers.

However, customers can no longer purchase Iwano’s products directly at his shop. Horizon Labo was initially intended to be open for the first seven days of the month alongside the shop run by his parents, Ripple Yohinten, which sells clothes designed by his mother, Kumiko, 38, and dyed by his father, Haruhito, 40.

The news of a coffee shop opened by a 15-year-old soon spread online and was reported by media outlets. Packages of Iwano’s coffee sold out on the first day of the planned weeklong opening, and his neighborhood was congested with traffic as many customers came not just from other parts of the nation, but from China, Thailand and other foreign countries.

These developments prompted Iwano to buy a larger roaster to boost his production capacity. He also began selling his coffee online and to new dealers in and outside Gunma Prefecture, including D47 Design Travel Store at the Shibuya Hikarie commercial complex in Tokyo that features specialty products from the nation’s 47 prefectures. 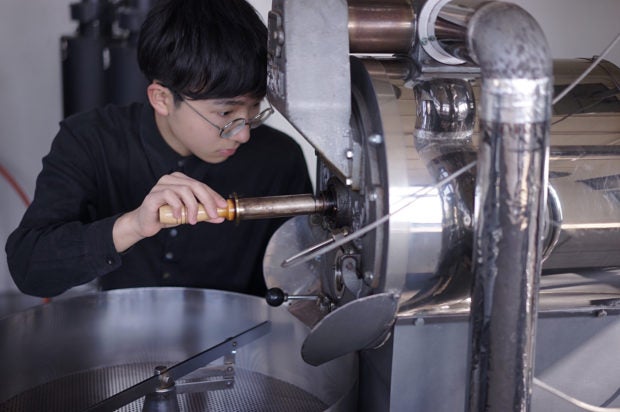 What Iwano is doing today would have been unthinkable just four years ago, when he was unable to continue his first year of junior high school.

Iwano always struggled at school, as he found reading, writing and other activities challenging. Copying what was written on the blackboard in his notebook was particularly difficult.

His struggles grew more severe after starting junior high school, and his parents told him about his developmental disorder. However, he tried to be a good student.

“Even if I managed to go, I couldn’t submit my homework and keep up with classes,” he recalled. “I hit a dead end.” He found it difficult to continue attending school in the second semester of his first year.

His attempts at housework didn’t go smoothly at first. When Iwano washed the dishes that his family of five used for breakfast, he focused too much on washing each item and was unable to finish his chores by lunch.

“Being able to complete one round of dishwashing gave me a sense of accomplishment,” Iwano said. “And my family thanked me for my work. That might not seem special, but the combination of little things like that helped improve my self-esteem, which eventually pushed me forward.”

Haruhito and Kumiko also took him to meetings with business partners and on overseas trips for their artistic activities. They didn’t hesitate to talk about their son, asking friends and associates to give him advice and help.

For a boy who used to know only his family and school, meeting people of various professions was an enlightening experience. “Every time I met with and listened to such people, my world expanded so much,” Iwano recalled. “That helped me think, ‘Well, maybe I don’t have to think too seriously about [the fact that] I don’t go to school.’”

His parents’ network also introduced Iwano to a life-changing appliance: a small manual coffee roaster. A friend of his parents offered him the device, saying he should try roasting beans, as the boy loved drinking and making drip coffee.

His first attempt yielded nothing but “charcoal,” as Iwano described it, but his fascination with roasting deepened. According to Iwano, the simplicity of processing coffee appealed to him in the most.

“Coffee roasting takes an hour, or 1½ hours at most,” Iwano said. “You can’t roast the same beans all day.

“To what extent can I express what I want to express in such a short period? That kind of simplicity is different from what fascinated me before,” he added. “You can also improve your skills by conducting multiple roasting sessions in a day.”

For Iwano, it took half a year before he was able to roast decent coffee, and another half-year until his parents described his brews as “delicious.”

He’d considered opening his own business, but was finally convinced to do so by Kumiko. Several days later, he opened Horizon Labo. “I didn’t have the courage to go through with it, but my mother said, ‘You should open a shop because it’s very easy,’” he recalled. “Otherwise, roasting coffee would end up as just a hobby.”

The business’ name, Horizon Labo, partly comes from a beautiful scene he observed when his family visited Phuket, Thailand, the year before the opening. A horizon appears tranquil from a distance, but sailors encounter big waves when heading in its direction. The use of “horizon” represents Iwano’s desire to overcome hardship in heading for his destination, while “labo” indicates his willingness to explore not only roasting methods, but other areas of interest.

‘Talking’ with the beans

Iwano reached a turning point as a roaster three months after opening his business. A regular customer of Ripple Yohinten suggested he visit Nepal, a country where the customer worked to improve people’s lives.

The trip was an eye-opening experience for Iwano, as it marked his first contact with a coffee bean farm. “Watching how many people are involved in shipping the product all the way to Japan, I realized the huge responsibility of the roasting profession,” he recalled.

Iwano’s experiences during the trip changed his attitude toward roasting. He used to look at coffee “from above,” but now “I try to stand equal with coffee beans by having respect for them,” he said.

What is it like to roast coffee beans as if “talking” to them?

“They change their facial expressions from time to time, just like people,” he said. “I respect the beans’ natural disposition, and add my own themes. I seek a good balance between the two.”

A growing number of customers have come to appreciate his creations since Horizon Labo opened, and that has helped him cope with his Asperger’s syndrome.

“Now that I’ve created a job on my own, I don’t feel negatively about [my developmental disorder],” he said. “It’s significant for me to gain the ability to use it in a positive way.

“I can consider it part of who I am today,” he added.

Opening his business has also made him more cheerful, the teen said, as he has had many chances to meet various people. Two books have been published on Iwano, and he has been featured in numerous media reports. He has also been invited to participate in talk shows at Shibuya Hikarie and other locations, including an event in Hong Kong in September.

When Iwano had no self-confidence, he believed trying new things would ultimately be meaningless. However, he now realizes he can become good at something by trying many times, rather than improving step by step.

“Now I know that even if you try something and seem to fail, it’s meaningful in its own way,” he added. “I’m willing to try something every day.”

Iwano is now interested in trying clothing design like his mother, among other things. As a coffee roaster, he hopes to promote the idea of leading “a rich life with coffee.”

“When relaxing with coffee even for just 30 seconds, something may hit your mind, which can be a big factor in helping you move forward,” he said. “Your life can become richer by enjoying coffee. I hope to create coffee that can help with this.”