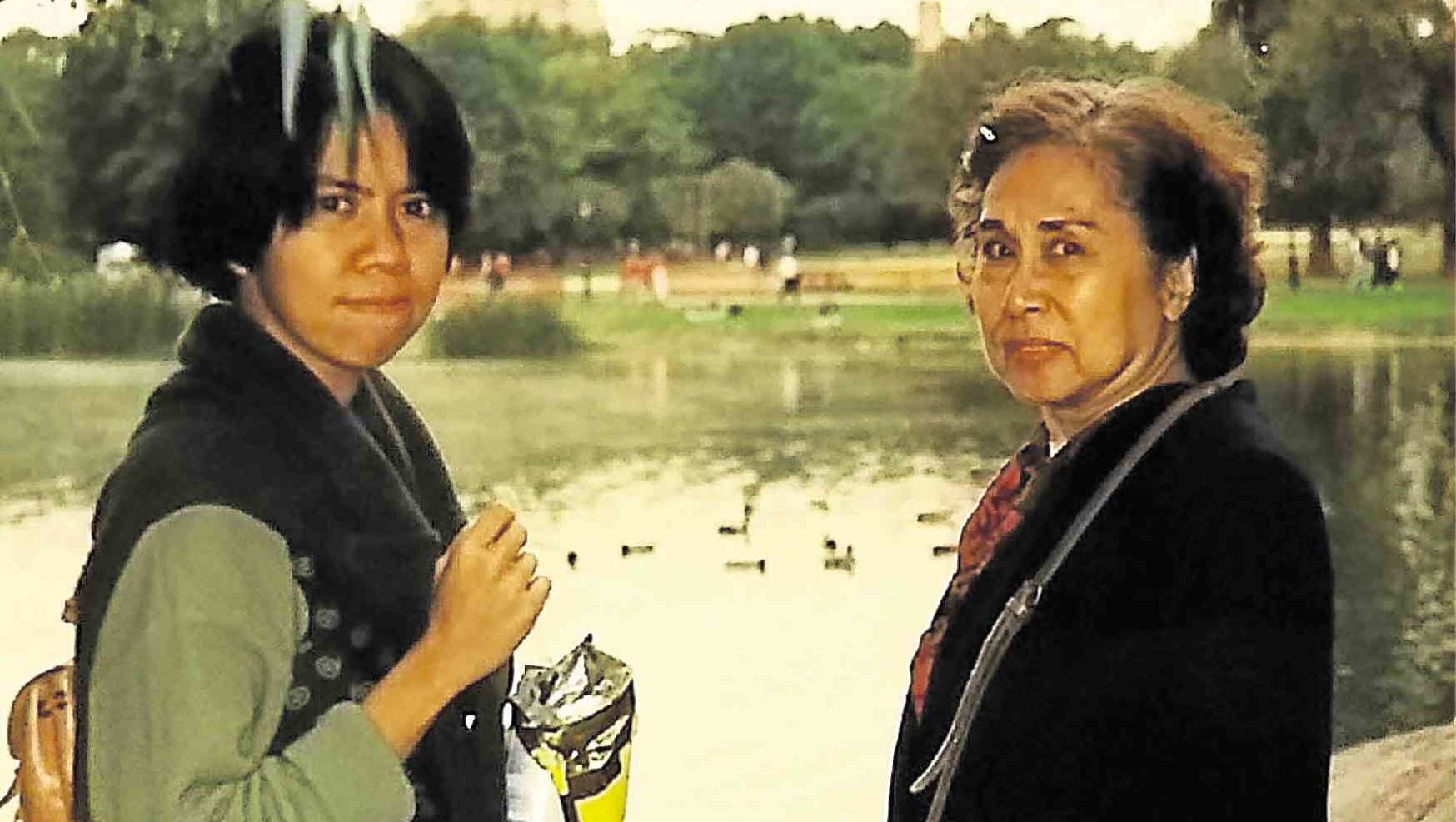 There was a time I could not conceive of life without my beloved mother. I used to joke with myself, “Maybe I’ll get lucky. Maybe I’ll die first.” Well, I didn’t die first.  But I am the fortunate owner of, and have direct access to, several boxes stuffed with letters from mom, written over the span of a quarter century.

Mom was an inveterate letter writer—pen to paper, no drafts, amazingly clean final. I’d get at least one fat piece of mail every two weeks in my United States homes up to the time mom fell ill. Those letters will allow mom to continue to speak to me, and to her grandchildren and great grandchildren, into the next century.

Mom was the author of several Filipiniana books, and editor or writer of hundreds of magazines and newspaper articles about Philippine culture, art and history. The masterpieces of my mother, Luningning Bonifacio-Ira, are the coffee-table book “Streets of Manila” and the short story “Tell Me Who Cleft the Devil’s Foot.”  She also wrote “Guidebook to the Filipino Wedding” and “Philippine Beer: Its Life and Times.”

She was a multiple Palanca awardee and judge for literature, and her short story is included in “The Best Philippine Short Stories of the Twentieth Century.”

Mom was highly curious, her mind filled with a wide range of subject matter from literature, history and art, to pop culture and current events. She had the ability to effortlessly capture the swirling ideas and information from that beautiful mind and commit those to paper.

Mom recently passed away at 90, a milestone made all the more significant by the quality of her life as a devoted wife to “the love of her life” (dad, the other half of one great love story), a highly regarded writer, well-loved friend and mother.

Mom was an affectionate, encouraging, generous and fun-loving parent to me and my siblings Nookie, Fritz, Hans and Gretch. She taught us that gratitude for the smallest things goes a long way, that you are what you read, and that if you had special skills or talents, you owed it to yourself to “hang a shingle” and share those with the world.

What stood out for me was that she dealt with critical health issues (she was a cancer survivor) with admirable courage and grace. Being her child was like hitting the blessings jackpot.

When dad passed away a few months before mom, we discovered files marked for each of their children. Mine consisted of her Fall ’94 letters to dad (“Dear Renatus,” she playfully wrote to my father, Renat), focusing on her trip to New York City, where she described how her United States-based kids were doing.

The rediscovered letters highlight the wickedly witty side of mom that emerged whenever she traveled. I am thrilled to share those letters, along with the one she wrote to me (“Nen”) around the turn of the century, attached to a handsome, blank journal. She encouraged me to write by gifting me with blank journals all year round.

Well, mom, I say you were wrong. You just may have a millennium crossroads to live through. Your writings will see to that. I love you.

Share with me the pleasure of finding the first-ever resident-brand journal I’ve ever delighted in. It’s a handsome tome with the paper heft from the stitched faux leather cover, to the clear uncluttered layout and typography, to the buff tint and quality of the paper that will not let the ink seep to the other side of the page (Siyempre naman, fountain pen, ’di ballpen). And, it’s not so fancy that writing on it can be intimidating. Use it as the grandly expanded space of Note Writer’s “memories, observations and thoughts” sections.  But this time, to hold your thoughts as you watch people parade through the century’s time. It should all be appropriately commemorated.

I wish I could have had a millennium crossroads to live through. But no such luck. I guess I know the reason why nobody wants to die. People realize that life is one big party after all. They can’t stand the thought the party will go on and on after they leave and they’ll miss the fun.

I wish for you the best that the new thousand years will bring—at least through that which “your” era will cover.  Shine in the 21st century, my Nen!

I’ve enjoyed my stay with the children. In all moments of pleasure, we wished you could have been with us to make it complete. I’d feel guilty over being here, enjoying myself and spending money, were it not for the fact that I’m on something of a mission: to see how the children are, how they are doing, and to assess the situations in each case. There are times when a move, such as this of deciding to come for a visit at this time, seems to have been dictated by circumstances that turn out to be a crossroads.

Nen wanted to catch up on her sleep and so did not go with Gretch and me. But the day was too beautiful to spend indoors. We decided to visit Roosevelt Island for the thrill of riding the cable tram across the East River. Cheap thrills, $1.25 for the fare, then on the island, 10 cents for a shuttle bus ride. G and I took pictures of each other by the old island’s lighthouse, walking the paved perimeter of the place… After our little Roosevelt Island excursion, imagine my delight to see an outdoor branch of The Strand right under the Queensboro Bridge on 60th. By that time of course, my taste for book buying was satiated. Good news or bad?

Gretch treated me to an early dinner at a place called Serendipity. It’s absolutely lovely, a restaurant in one of those old, old apartments built probably within the first two decades of the century. It’s tiny—perhaps only a half of the original apartment, with floor-to-ceiling mirrors framed in carved wood and a fireplace straight out of Washington Irving. Gretchen paid for the ambiance, as well as for the delicate lemon sauce for the char-broiled chicken…

I’ve told you about the neighborhood of York Avenue. Let me tell you about Nen’s apartment. The entry and living room are dominated by a sofa bed by the doorway. On the opposite wall are two windows adorned by the computer, and the telephone, beside which is a huge stuffed tiger na piping-pipi na ngayon.  It’s what we sit on when we answer the phone.

We had a thoroughly enjoyable weekend last Saturday. Nen and I went to Chinatown for lunch at the invitation of Ronnie Alejandro, that New York fixture among Pinoy circles. He brought another friend, an Eli Lovina… While we were consuming soft-shell crabs (caught during the molting stage and deep fried in butter and salt, and eaten completely), who should come in but another group of Pinoy…

Sunday, Sept. 11, after mass at St. Ignatius, we passed up the Street Fair on 1st Avenue and proceeded to Bowling Green by subway. The girls were about to fulfill one of my modest ambitions, which was to take the ferry boat ride to Staten Island and back. I don’t know or care what’s on Staten Island: the boat ride is all. All for an hour ride over and back, for 50 cents. A lot cheaper than the Circle Line Cruise, which is $12; in the ferry we also pass close by Miss Libby on her island. Have to watch my expenses as I take care of dinner most of the time anyway—for what I’d spend for food (if I weren’t with the kids) is enough to feed three of us. It’s great fun, and enjoy our abbreviated family life.

Since the South Sea Port isn’t too far off, we walked over, tracing the line of Water Street which, like Malate Church, must have been the shore line before the reclamation… At one time, while seated on deck watching the riverboats, we saw (from the third floor deck) the riggings of the old pirate ship approaching.  It anchored at the back of the converted fisherman’s market. Umaandar pa pala! Akala ko, ghost ship. Seems there was a boat show earlier and activating the schooner-type boat was part of it.

In our Greenwich Village walk I decided to look into the still-running show “The Fantasticks” on Sullivan Street. I thought Nen and I could go in and watch the matinee for ‘Auld Lang Syne.’ Tickets are $35 each. We decided we’d seen the show twice at Rep anyway, had heard the record endlessly, and that $35 X 2 = $70 is just too much.

The girls are as ever full of high spirits, although they refuse to acknowledge the reality of my departure for home in just days from now. I told Fritz the skies get more leaden and the wind chillier. It dampens my spirits. It’s really time to wind down toward my wheelchair in San Francisco…

Nen took me to a reading by John Irving. It was held in the West Side outlet of Shakespeare and Company, which was filled to the brim a full hour before Irving’s appearance. He has a following. I hope plans don’t go awry—we’re scheduled to go to a reading of EL Doctorow. It’s new book promotion time.

Last Sunday, we went to the Annual “New York is Book Country” Fair. All Fifth Avenue, from 47th to 57th  Streets, was filled with books and people. I got the 25th Anniversary issue of The Paris Review which, I told George Plimpton (at a booth), I had been reading since college. Made him sign my copy and then worried about germs, as he had an awfully runny nose when he held my copy, saying he should be the one to thank me.  I’m not sure if his germs are as intellectual and witty. –CONTRIBUTED