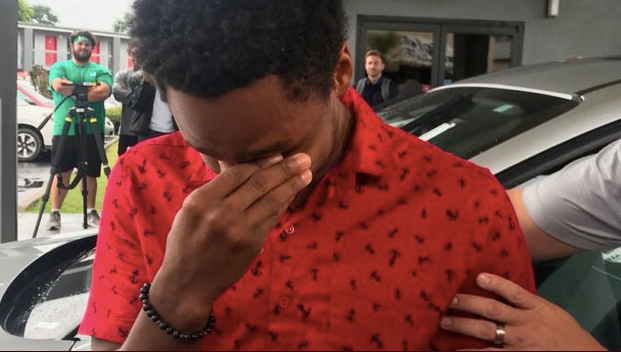 Jenny Lamey and her husband Chris woke up early at 5 a.m. on Friday last July 13 to get ready for their big move. They were set to move houses that day and were waiting for the movers to arrive. At 6:30 a.m., a police officer rang their doorbell, and told them a student named Walter Carr walked 20 miles from Homewood to Pelham (Alabama) just so he can make it on his first day at work.

It was Walter’s first day as a mover for Bellhops Moving company that day, and did not want to miss his first shot at work even though his car broke down the night before.

“Walter said that he was supposed to help us with our move today. The officer proceeded to tell us that the previous evening, Walter’s car broke down and he didn’t know how he was going to get to work. So he left Homewood at MIDNIGHT and started WALKING to Pelham on 280. He WALKED ALL NIGHT,” wrote Lamey on her Facebook.

This deserves 1000 retweets! Read this amazing story about Walter, a new bellhop in Birmingham.

Major shoutout to the @PelhamPoliceAL officer who lended a helping hand. pic.twitter.com/eLgbAxg4uv

“The police said they picked him up earlier that morning, took him to get some breakfast and once they checked his story out, brought Walter to our house.”

Lamey, her husband and the police officer were moved by Walter’s story, and it’s apparent that Walter’s exceptional determination for showing up on his first day at work wasn’t missed by the CEO of Bellhops Moving, either. According to Alabama online news site Advance Local today, July 17, CEO Luke Marklin was so in awe of Walter’s work ethic that he gave him a car.

Marklin apparently drove from Tennessee under the guise of thanking Walter, only to surprise him with a barely-driven 2014 Ford Escape. Pictures of the meeting were shared by the Pelham Police Department yesterday, July 16, showing a tearful Walter after receiving his car.

“Proud to have encountered this young man,” wrote the Pelham Police Deparment, who also deserved praise for picking up Walter after walking at the dead of night. “He certainly made an impact on us!”

Proud to have encountered this young man. He certainly made an impact on us!#PelhamPD #belikewalter pic.twitter.com/d0zz0PMvnv

Meanwhile, Lamey has since put up a Go Fund Me page for Walter, raising around $6,000 thus far in donations. Cody Cepeda/JB