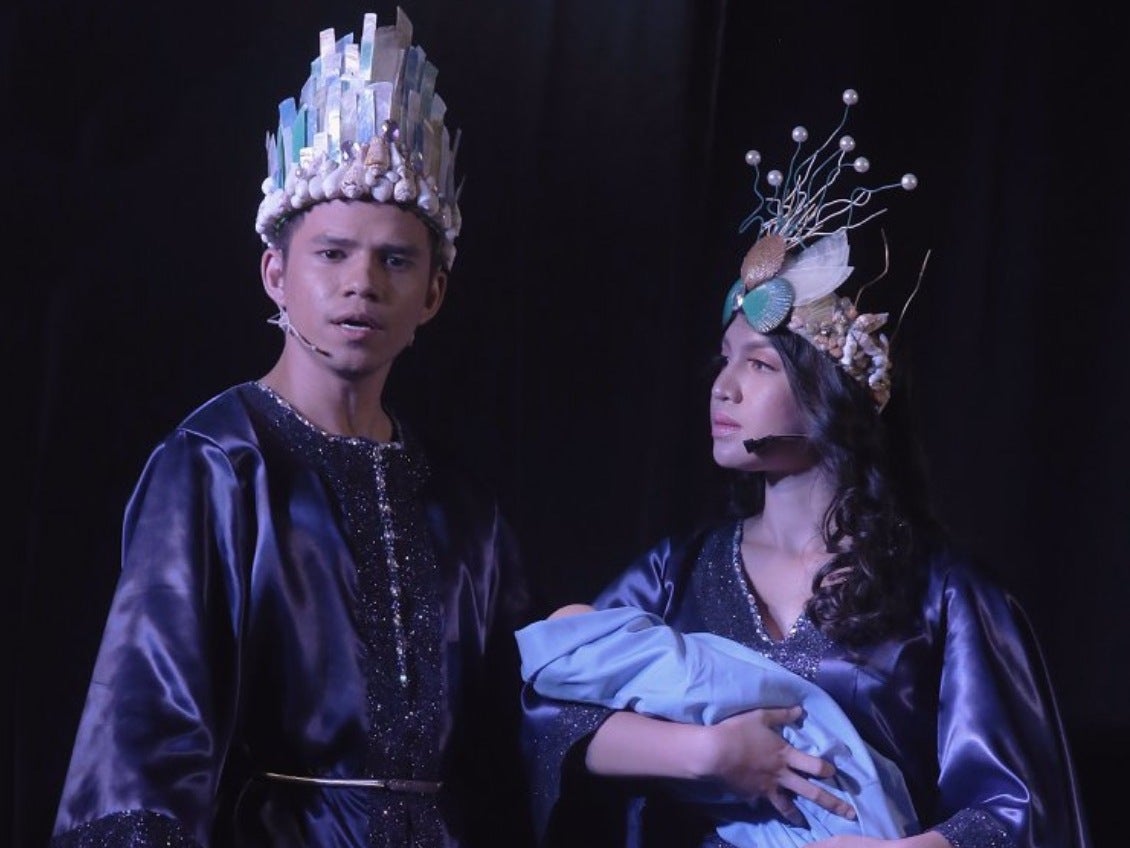 Funded by the University of the Philippines Visayas’ Humanities Division, which was given a financial award under the Commission on Higher Education’s (CHEd) Innovation and Institutional Development Grant, the recent dance drama “O’Layra Prinsesa cang Dagat,” directed by Kevin Piamonte and choreographed by Robert Rodriguez, was well received by audiences in both Iloilo City and San José, Antique. It’s the first full-length play in Kinaray-a to date.

Based on material archived at the Center for West Visayas and suggested to Piamonte by Zoilo Andrada and Milagros Legislador, “O’Layra” took off from the radio drama of Russell Tordesillas, a popular figure among Antiqueños and also known in Kinaray-a literature. His radio drama about “O’Layra”—perhaps the equivalent of current teleseryes—aired by the DYKA (Radio Kauswagan Antique) station in the 1970s, became an enduring favorite among local listeners.

In Piamonte’s play, the narrative arc of O’Layra—about the tamawo’s/enkanto’s concern for not having a soul and, thus, an afterlife—was retained.

An emperor and emperatriz tamawo want their daughter O’Layra to live with the mortals, find a man to marry and bear half-mortal children with souls. The couple leave their baby daughter under a bubog tree where she is discovered by a mortal couple who raise her to adulthood as their own. She grows up and falls for Fitzgerald.

Piamonte, however, gave the plot a twist. Tordesillas becomes part of the world of O’Layra as the radio-dramatist who creates the story around her gets engulfed in his own fiction—entering the world of his characters, falling in love with O’Layra, and becoming upset when she falls for another man. Tordesillas’ attempts to derail the love interest fail and he eventually dies of heartache.

However, in Piamonte’s second version and staging, Tordesillas was resurrected.

What was a possible language barrier—the dance-drama in Kinaray-a presented to a predominantly Hiligaynon-speaking crowd—did not seem to bother the audience, which was able to follow the scenes and enjoy the exchange of lines between the characters. The viewers were even sensitive to what seemed an undertone of homoeroticism between Tordesillas and his doctor-friend.

“O’Layra” finds its appropriate place among the rich literature of the Visayas. Read along the “Seven Layers of Panayanon Universe” and Alicia Magos’ works on the “10 Epics of Central Panay,” “O’Layra” perfectly makes sense. The crossing over of characters—O’Layra to the mortal world and Tordesillas to the land of the tamawo—does not necessitate a suspension of belief, as this fits the audience’s cultural paradigm.

Among many Visayans whose consciousness is informed by the presence of other worlds, of the babaylan and binukot, there is no clear distinction between the human and nonhumans worlds. These logical intersecting or coexisting worlds were rendered in the play as a visual fugue of places such as the radio station, the forest with the bubog tree and the sea.

Integral to the play were the choreographic sequences of Rodriguez. Although generally earth-bound and strongly grounded—Rodriguez acknowledges the influence of modern and neo-ethnic dance choreographer Agnes Locsin on his works—the texture and quality of the movements changed with the scenes. Rodriguez’s choreographic architecture and vocabulary not only complemented the play’s narrative, but also maximized the range of movement ability of his performers, most of whom had no dance background at all.

Crista Sianson-Huyong’s otherworldly and meandering music, meanwhile—a combination of haunting vocals and instrumental chords—captured a range of moods and provided the appropriate atmosphere for the play.

With “O’Layra’s” success in Iloilo and Antique—the play was warmly received in its hometown where tickets were priced at P1,000—we look forward to another production by Piamonte, whose commitment to work on and with local materials has resulted in productions that have paved the way for cultural conversations.

Ruth Jordana Luna Pison, Ph.D., is an associate professor at the Department of English and Comparative Literature, University of the Philippines Diliman, where she teaches courses on Philippine literature, Philippine women writers in English and literary criticism. She is also currently doing extensive research on Philippine dance.