That A350 high (and Timothée Chalamet can wait) | Inquirer Lifestyle 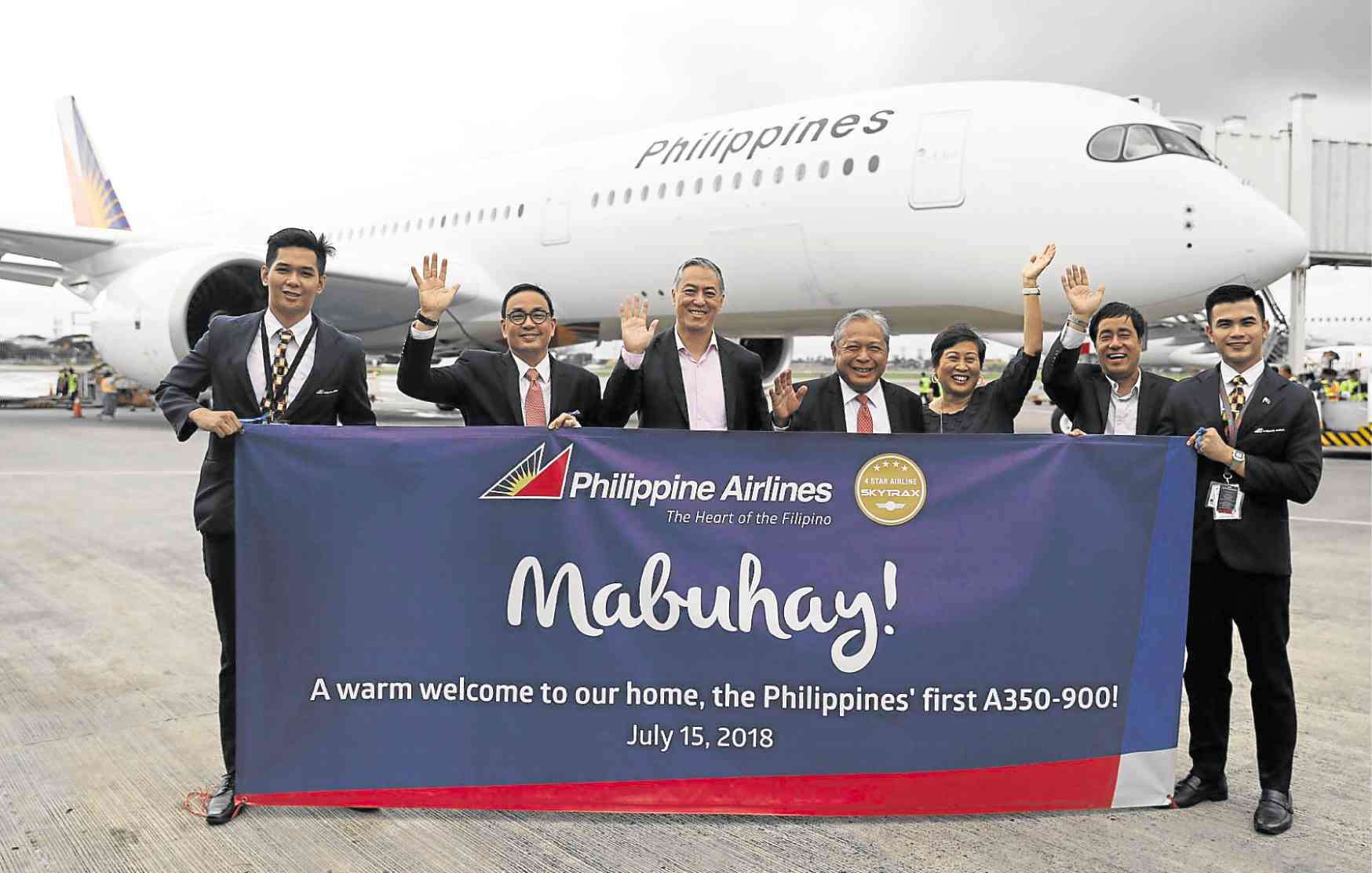 That A350 high (and Timothée Chalamet can wait)

We don’t remember a time we saw people excited over stepping inside a newly delivered plane, as they were two Saturdays ago in Toulouse, France. Men get excited over  cars, women salivate over new “it” bags. But planes?

They just did. The air was charged with anticipation as passengers—airline executives and media—set foot on the Airbus Delivery Center in Toulouse, to the vibrant strains of Vivaldi played by a string trio.

There beyond the glass panoramic windows was the four-star carrier Philippine Airlines’ new Airbus A350-900, its graceful curve gleaming in the baby-blue summer sky of southern France.

It was all set to fly. But first, the honors.

This month’s delivery of the A350-900 is a milestone—indeed a historic moment—for the nation’s flag carrier because it is the flagship of PAL’s long-haul operations, a game-changer, no less.

Bautista stressed in his remarks, “The aircraft is a game changer in the industry with their greater range, lower fuel burn emissions and lower operating costs.”

PAL’s A350 will set a new standard by allowing the flag carrier to fly nonstop almost halfway around the world on the longest routes ever to be served by a Philippine carrier, it is said.

Bautista added, “This aircraft utilizes advanced technology and top-notch design for improved operational performance and will be assigned to premium routes, and will thus address the need for comfort, convenience and efficiency.”

This is the first of the six A350 aircraft orders of the four-star carrier PAL, and will be used to fly nonstop to New York, later to London and other transatlantic routes, Bautista said, with more passengers, “without payload penalty, with more cargo cabin, and to make the passengers fly more comfortably.”

He qualified, “It’s a different level of service from the heart of the Filipino.”

PAL director and president of the LTG (Lucio Tan Group of Companies) Michael Tan put it succinctly to Lifestyle, as we stood beside the aircraft, “It’s our commitment to the country and our people.”

It comes at a time Filipinos, especially the millennials (pardon the term, for lack of a better catch-all word to describe that demographic), are traveling more than ever, lusting after newer and newer experiences they can post on social media.

Filipinos are so into claiming the moment. And that includes one’s time in airspace.

Face it, no matter the kinks (e.g. flight delays), Filipinos love to fly PAL, like it was their auto-default airline, because the food is relatively suited to their palate; the flight is direct to the West Coast (a second home for many Filipinos) and other popular routes; the service isn’t only warm but also, one is always in chikahan mode with the staff.

When our media group that was flown by PAL to Toulouse for the A350 delivery walked inside the cabin for the long flight home, after the ribbon-cutting and the plane blessing, we understood finally their earlier claims of comfort and convenience.

The cabin ceiling is higher, particularly in Business, because the cargo storage bin in the center is done away with. The storage bins on both sides make up for the slack by accommodating more hand-carried luggage—six big-size ones, to be exact.

Business has 30 seats arranged in a 1-2-1 configuration, so that every passenger has direct access to the aisle. No need to jump over other passengers.

Unlike in other airlines’ Business cabins where one feels a sense of privacy but feels entombed, here one gets an intimate space, yet the cabin is airy.

Seat pitch is 44 inches and width up to 24 inches. The seat reclines to a full-flat bed (78 inches in length), with adjustable air cushion to achieve the desired seat firmness, lumbar massage.

The storage for personal items is within half an arm’s length, perfect for bone-weary passengers like us who just want to conk out in the cabin.

But before we could tune out, Daniel Baron, the cabin interior designer from Lift Strategic Designs, who was on board with us, must show precisely how the cabin’s LED mood lighting is what sets the PAL A350 apart from the others.

Airborne, we were treated to a light show—a veritable fireworks display—to illustrate that the cabin design has 16.7 million possible colors to choose from. Talk about customized mood lighting.

Baron’s lighting turned festive one moment—like the “colors of the famous Philippine fiesta,” he told us earlier—a subdued, slumber-deep blue the next, and a cool minty green still the next second.

Then there was light amber—our own sunrise/sunset up in the sky.

“The mood lighting scenario in the cabin is developed around the Filipino flyer,” Baron told Lifestyle. “It’s the sky over the Philippines’ more than 7,000 islands.”

That and the woven fabric in the cabin evoke the Philippines. The woven threads yield various colors that change, as Baron showed us, depending on where you see it from and how the light hits it.

“This is the most comfortable aircraft ever. Feel the angle and shape of the seat cushion,” Baron said.

We understand his high —after all, we learned that he was given a free hand by PAL in designing the cabin.

“Today’s flyer is a multi-tasker,” Baron said. “Now, how do you let him be that, while still allowing him to relax? He wants full control of his environment always. (We designed the cabin) to allow him to sleep and be comfortable even in Economy. Today’s Economy passenger is tomorrow’s Business.”

The LED mood lighting helps the passenger adjust to the time zone and the day-night changes.

The lavatory has soft mood lighting—“so you can feel calm and relaxed before landing,” Baron said.

It has a quieter cabin, up to four times less noise, making it the quietest twin-aisle aircraft to date.

And yes, the Airbus A350 seats have personal TV screens. (See sidebar, “Features of PAL A350”)

I watched “Phantom Thread” (Daniel Day-Lewis), “Lady Bird,” “Call Me by Your Name,” without finishing the latter.

Don’t tell me the ending. Our pilot, Capt. Butch Generoso’s landing was good enough to leave me no disquiet, even as Timothée Chalamet had his. (Kids!)

The A350 will fly the nonstop Manila-New York JFK and Manila-London Heathrow routes by end of October. Services to other points in North America and/or Europe follow as more aircraft join the fleet in the next 12 months, including possible routes to Seattle, Chicago and a point in Western Europe.