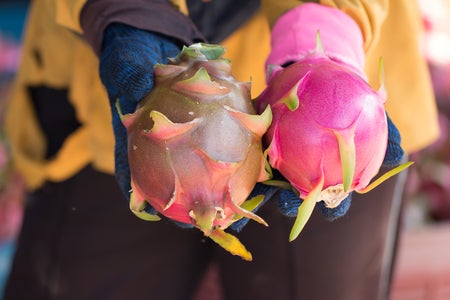 The heavy rains, merciless floods and mudslides that hit Japan recently took the lives of at least 200 people. Towns in western Japan were transformed into lakes after rivers overflowed, with many people left beached on rooftops awaiting military rescue.

As Japan recovers from its latest calamity, one farmer from Taiwan has made it his undertaking to raise funds for Japan’s flood victims. As per The Japan Times last Sunday, July 22, 65-year-old Lin Ting-tsai from Yilan County in Taiwan held a two-day dragon fruit sale over the weekend to power his fund drive.

Lin harvested a whopping 1,380 kilograms of dragon fruit from his farm and vowed to donate his earnings from the sale of the 900 kilograms of the fruit. This dragon fruit harvest is Lin’s first out of his four annual harvests. He estimated that his earnings could bring in around a ballpark figure of 100,000 to 120,000 Taiwan dollars (US$3,200 to US$3,900).

Many people were taken by Lin’s stall at the market, choosing to line up to sample ice candy, smoothies, and juice made of dragon fruit. Lin only started growing organic dragon fruit back in 2015, but his harvest has since earned third place in a quality contest this 2018.

It was Lin’s experience in losing his crops from a past typhoon that propelled him to help the flood victims of Japan. As a farmer whose crops are only as good as the elements allow him, Lin saw reason to be all the more giving in helping those helplessly in need.

Hu Jong-Im, chief of Taiwan’s Agriculture and Food Agency, was instrumental in Lin’s initiative as he facilitated the sale in Taipei. According to Hu, he decided to help Lin after an old friend of his told him of Lin’s good intentions.

“Japan is our neighbor. We always help each other out when disasters strike,” Hu was quoted as saying in the report, citing past instances when Taiwan received help from Japan, such as a strong earthquake in Tainan last February 2016 and another that afflicted Hualien last February 2018. “I hope the two-day sale will strengthen the friendship between Taiwan and Japan.”  Cody Cepeda/NVG

Thousands still in shelters after deadly flooding in Japan