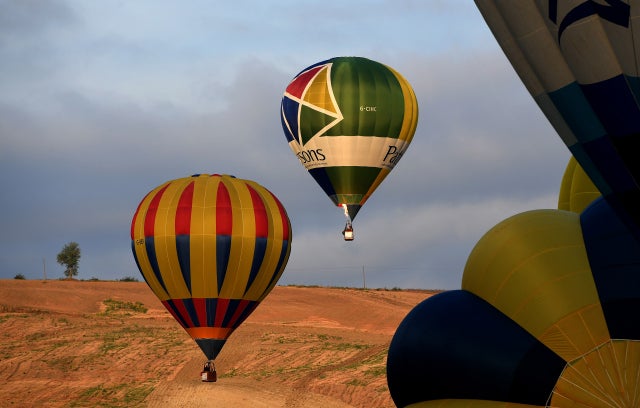 Dozens of hot air balloons dot the skies over Italy’s central Umbria region as enthusiasts gather from around the world for two weeks of friendly competition.

The event, which takes the colorful craft over the lush vineyards of Umbria’s Sagrantino valley, is the brainchild of Ralph Shaw, of dual Italian and British nationality.

“We started off with just five balloons, and now this year we’ve reached our target of 90 balloons, and hopefully next year it will be 100,” Shaw said.

In addition to 22 teams from around Europe, pilots from the United States, Russia and Australia are taking part in the Sagrantino International Balloon Challenge Cup.

“We have many flyable days in Italy, whereas in England, for instance, we may only have 20 days a year,” Shaw said. “So everybody comes willingly to Italy because they…are sure of having a good flight.”

One of the most popular competitions at such events is the Hare and Hounds, in which one balloon, the hare, takes off and all the rest of the balloons, the hounds, follow, then try to land close to the hare.

Contestants are equally drawn to events on the ground, mainly centered on the region’s cuisine and wine.

“Free… happy,” said pilot Matthew Billing when asked how the event made him feel. “It’s always like being home again, because I spent a lot of time doing it when I was younger.”

Another pilot, Tom Hilditch, said he was “born into” hot air ballooning, recalling how his father built a model balloon with a radio-controlled burner. NVG