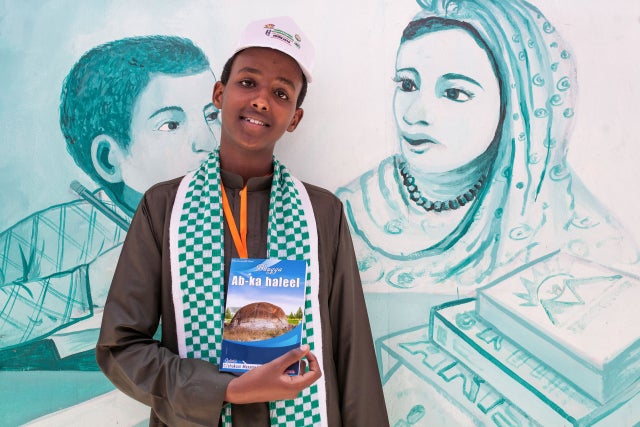 Abdishakur Mohamed, 16, a young author from Somaliland holds up a copy of his book. © MUSTAFA SAEED / AFP

Aged just 16, Abdishakur Mohamed confidently presented his latest work to the Hargeisa book fair, an event that has transformed Somaliland’s literary scene over the past decade.

Abdishakur spent four years writing “Ab-ka haleel” (“In the footsteps of our ancestors”), intended as a rebuttal of friends who he says were not “embracing their culture”.

“Instead they see it as unimportant, and their Somali identity is in danger,” he told AFP.

At the first annual event in 2008, organizers only exhibited a handful of books borrowed from friends and attracted just 200 visitors.

Ten years on and literature has taken a prominent place in Somaliland’s culture.

The book fair, being held from Saturday, July 21 to Thursday, July 26, has been a key factor in Somaliland’s embrace of literature.

The fair now has international appeal and attracts exhibitors from across the world while helping to raise awareness of the self-proclaimed country’s relative stability in contrast to Somalia.

Somaliland broke away from the rest of the troubled Horn of Africa country in 1991 but has gone without international recognition since.

‘Here to encourage the young’

“I come because it’s a space that really allows people from all walks of life, from ambassadors, to politicians, to artists, to thinkers; different people to just come here and share ideas about the future of Somaliland as well as looking back at the past,” said filmmaker Khadra Ali.

“We are here to encourage the young people and tell them the value of writing, whether it’s books, poetry or things related to art,” said author and playwright Yasmin Mohamed Kahin, whose work was exhibited at this year’s fair.

Somaliland and Somalia have a long oral storytelling tradition that celebrates poets like Mohamed Ibrahim Warsame, known as Hadraawi, who is considered by some to be the Somali Shakespeare.

It was only in 1972 that the Somali language was codified by the military government of Siad Barre in an effort to strengthen national identity.

But armed resistance to Barre’s increasingly authoritarian rule slowed the momentum of the language’s formalization.

The Somali army subsequently bombed Hargeisa, pushing Somalilanders into exile in Europe and the Gulf as well as to refugee camps in Ethiopia.

Adan, who enjoys celebrity status among young people for her activism, recalled her late 1990s visit to the site where the Hargeisa cultural center that hosts the fair now stands.

The complex, comprising a library, gallery and theater, opened its doors in 2014.

“I couldn’t walk in the streets here because the Somali soldiers had laid mines,” she said.

“But then it took off extraordinarily.”

Adan added that every year there were more and more young people inspired to write in Somali, as well as foreign languages including Arabic and English.

‘The value of books’

“It introduced young people to the value of books — something they didn’t know before,” she said.

Jama Musse Jama, a researcher at the University of Pisa, returned from Italy in 2008 and founded the fair.

He had previously assumed that his countrymen did not read because of their strong oral tradition.

“But then I came here and I realized that was not the reason. What was missing was the raw material. There were no books circulating,” said Jama.

“We forgot who we are. We forgot art, culture, music. You know, in the 40s, 50s, 60s, Somali music used to be one of the best African music scenes. Today maybe young people have no idea what Somali music is.”

But Jama insists that “things have completely changed” as awareness of literature and other art forms has grown.

Photographer Huda Ali, who in 2017 published an anthology of images depicting Somaliland, agrees.

“Ten years ago they were sometimes surprised to see a girl with a camera in the street. It was something very strange to accept. But over time they changed,” she said.

A delegation from Rwanda were the guests of honor at this year’s event.

Rwandan artist Carole Karemera said that Somaliland, like her own country, had been buoyed by a new artistic “self-confidence” after coming close to total destruction. NVG