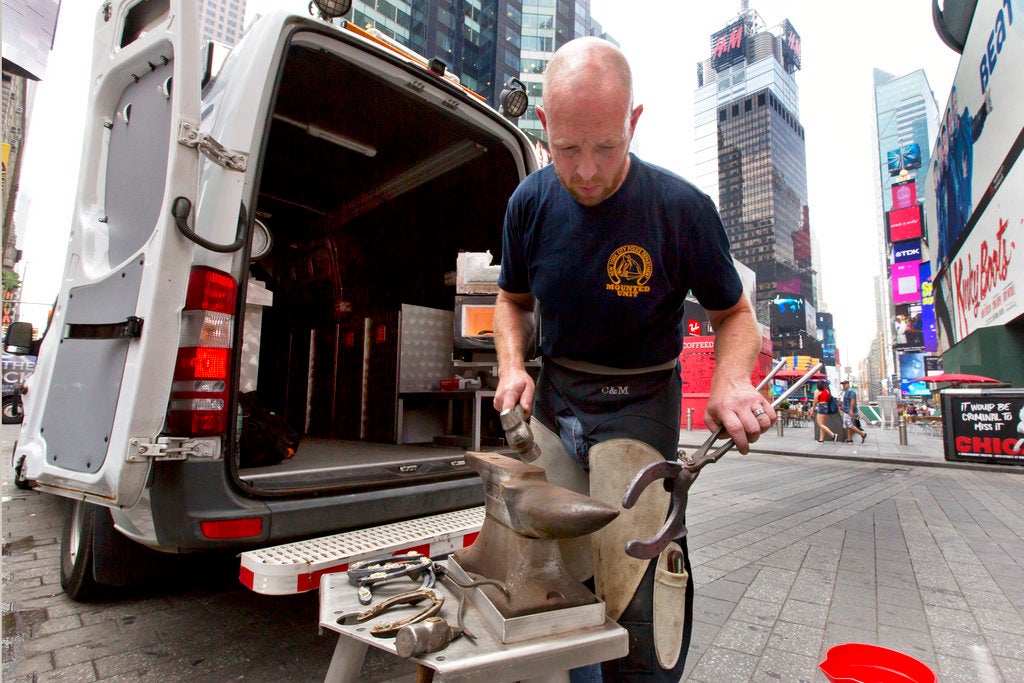 In this Tuesday, July 17, 2018 photo, New York City Police Department farrier Thomas Nolan uses a hammer and anvil as he shapes a horseshoe, while working from a mobile unit in New York's Times Square. When one of the New York Police Department’s horses loses a metal shoe, or they just wear out on the gritty city streets, a blacksmith shop on wheels rushes to the rescue, equipped with a 2,850-degree furnace and trained farriers who can make the fix on the spot. (AP Photo/Richard Drew)

When one of the New York Police Department’s horses loses a metal shoe, or they just wear out on the gritty city streets, a blacksmith shop on wheels rushes to the rescue, equipped with a 2,850-degree furnace and trained farriers who can make the fix on the spot.

“It’s almost amazing that in modern times we’re still doing horseshoeing out in the public in the street,” says Deputy Inspector Barry Gelbman, head of the NYPD’s elite Mounted Unit, where all 50 horses are considered equine officers, with badges around their necks to prove it.

The NYPD has two such mobile horseshoe units that are stocked with all manner of anvils, hammers, nippers, files and pullers that have been the tools of the equine hoof trade for centuries, providing a stark contrast in the midst of a modern city.

That was immediately apparent on a recent sweltering day in Times Square as horses got their monthly shoe change. Beneath shimmering skyscrapers, massive video billboards and dozens of high-definition security cameras, a crowd gathered to watch as two NYPD farriers sweated over molten-red steel shoes fresh out of the fire.

But this was not an entirely low-tech affair. For extra traction and strength, the shoes were welded with a layer of tungsten carbide, a compound twice as hard as steel that’s also used in armor-piercing ammunition.

Farriers Marcus Martinez Jr. and Thomas Nolan held the crowd spellbound as they worked for an hour to swap out the shoes for a police horse named McQuade II, who, true to his training, didn’t even flinch amid honking traffic, people shouting and a helicopter whirring overhead.

“We nip the foot down, we file it, we make sure the foot is level,” says the Irish-born Nolan, adding that the safety of an officer depends on a farrier’s precision, lest a horse trip.

Martinez hammered away. Sparks flew, and clanging echoed into the steamy Manhattan air. Then came a sizzling sound as he pressed a fiery horseshoe on a tong into McQuade’s hoof to test the fit, smooth out imperfections and burn out any bacteria. A foul-smelling white smoke rose from the hoof.

With sweat dripping off his brow, Martinez then lifted the legs of the imperturbable, 1,200-pound (544-kilogram) McQuade and, one by one, hammered the shoes into place with 3-inch (7-centimeter) nails. Then the deep brown horse happily clip-clopped away.

“This is absolutely cool,” says Charles Gardner, a United Methodist pastor from Atlanta. “The coolest thing is the trust the horses develop for the farriers, to be able to pull the hoof up and just let them work on them like that.”

The NYPD’s horses, which come mostly from Amish country in Pennsylvania, form what the department says is the country’s oldest continuously active mounted unit. It was created in 1858 to protect people from runaway carriage horses that were then the main mode of transportation. These days, the horses are mostly used for crowd control and public relations.

When not on duty, they reside in one of four stables around the city. The Times Square horses live on the ground floor of an only-in-New York building called Mercedes House: a luxury skyscraper that’s also home to the city’s premier Mercedes dealership. When not working with the mobile vans, the farriers work there.

The NYPD’s three farriers are civilian employees of the department, hired for their unique set of skills.

Martinez, 38, who grew up in the suburbs north of the city, says he first was exposed to the craft in high school while watching a farrier friend work on horses.

“I fell in love with these wonderful, magnificent animals, the mechanics involved and helping something that can’t help itself,” he says. “And that’s a really good feeling.” AB