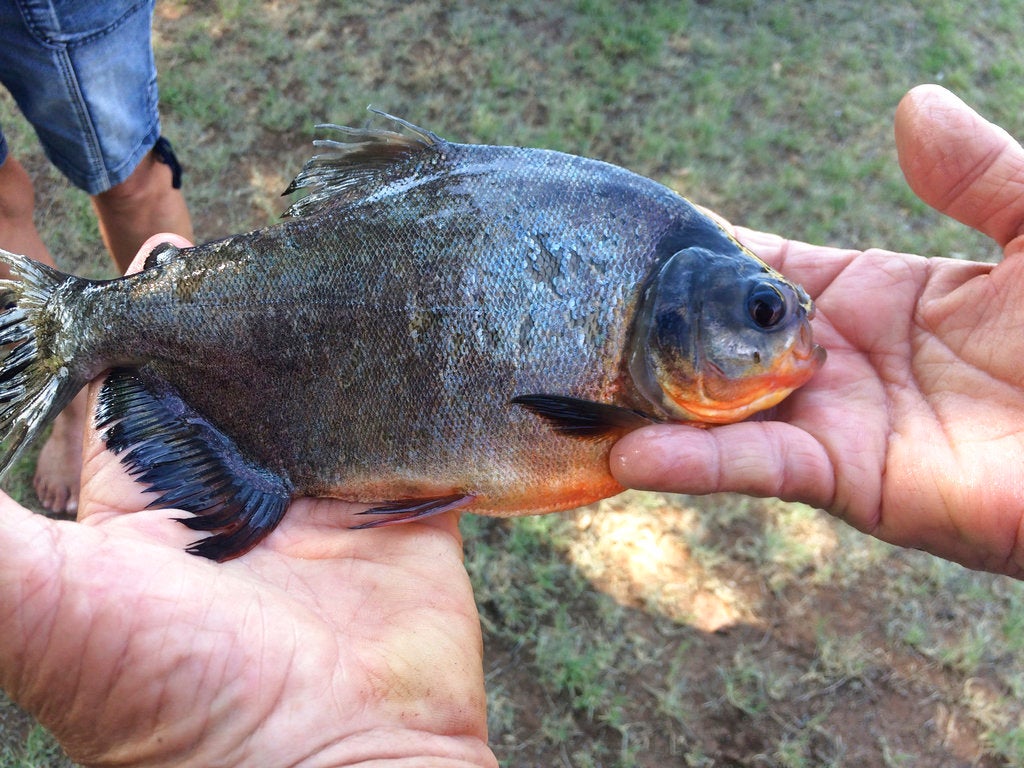 This July 22, 2018 photo provided by the Oklahoma Department of Wildlife Services shows a native South American fish known as a pacu that was was caught in a southwestern Oklahoma lake in Caddo County by 11-year-old Kennedy Smith of Lindsay, Okla. Game Warden Tyler Howser said the pacu is considered an invasive species and was destroyed. Image: Tyler Howser/Oklahoma Department of Wildlife Services via AP

OKLAHOMA CITY (AP) — An 11-year-old girl has quite the fish tale: A rare pacu with human-like teeth chomped down on the worm at the end of her line while she was fishing with her grandparents and brother in an Oklahoma lake.

But Kennedy Smith isn’t exaggerating when she describes her catch. Caddo County Game Warden Tyler Howser confirms that the fish was a pacu, a relative of the piranha that is native to South America and can grow up to 50 pounds (22 kilograms).

Kennedy’s fish weighed about 1 pound (half a kilogram), according to Howser and Kennedy’s grandmother Sandra Whaley.

Kennedy says she initially was “really excited” to have caught a fish Sunday in Fort Cobb Lake, about 55 miles (89 kilometers) southwest of Oklahoma City. She was shocked when the fish bit her grandmother, as Whaley removed the hook from its mouth.

“I was confused because I knew that fish with teeth are not normal. It was weird. They were human-like and that made it even weirder,” Kennedy told The Associated Press Thursday.

Whaley said she suffered no ill-effects from the bite.

Howser said the fish was likely purchased as a pet and was released into the lake when it grew too large for the aquarium of the family that owned it.

Pacu are considered an invasive species that can destroy the native Oklahoma fish ecosystem and habitat, so the fish Kennedy caught was taken by the Oklahoma Department of Wildlife Conservation and destroyed.