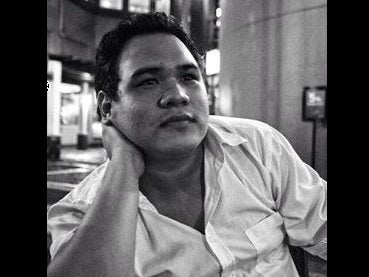 Guelan Luarca: ‘Don’t reinvent the wheel? Why not?’

Miguel Antonio “Guelan” Luarca is the epitome of the multitasking theater artist.

Until two weekends ago, he was acting in Carlo Vergara’s “Edgar Allan Hemingway” for Virgin Labfest 14. His adaptation of Lualhati Bautista’s “Desaparesidos” (which he also directs) is in rehearsals for a three-week rerun next month, following its 2016 premiere that former Inquirer Theater editor Gibbs Cadiz hailed as that year’s best full-length Filipino play. And he’s also finishing his translation of Shakespeare’s “Coriolanus,” slated to debut in February under Tanghalang Pilipino.

Then there’s his new job as artistic director (AD) of Tanghalang Ateneo (TA).

Luarca is 27 years old. A TA alumnus himself, he succeeded Glenn Sevilla Mas, whom he considers one of his three artistic fathers. The other two are Ron Capinding and Mas’ predecessor Ricky Abad, who kindled Luarca’s involvement with TA by having him help out with the performance text of “Sintang Dalisay,” the Sama-Badjao transposition of “Romeo and Juliet.”

“I left school for two semesters after third year college because of financial issues,” Luarca says. “When I returned, my collaborations with TA continued even though I was no longer formally a member. When Sir Glenn took over [from Abad], he made me part of his ‘inner circle’ who helped him come up with each season.”

“Just when I thought I didn’t want to act anymore!” says Luarca, who has become one of our most prolific theater writers. He was introduced to the Greek myths at 5, started reading Shakespeare at 7, and has now adapted into Filipino works ranging from Shakespeare to Euripides, Sarah Ruhl to Samuel Beckett, on top of scoring two Carlos Palanca first prizes for his Labfest entries “Mga Kuneho” and “Bait.”

The lineup, apart from the already-announced restaging of Ian Maclennan’s “The Squaddies’ Shrew” (hewn from Shakespeare’s “The Taming of the Shrew”), will include Puerto Rican playwright José Rivera’s “Marisol,” to be translated by Rody Vera and directed by Ed Lacson Jr.; and Luarca’s adaptation of the seminal Mike de Leon film “Batch ’81.”

“Marisol,” about a woman who gets caught up in a surreal, apocalyptic revolution between the angels and a so-called “senile God,” will see Teresa Barrozo’s return to designing music and sound for TA after 2016’s “Boy.”

For “Batch ’81,” Luarca hopes to assemble an artistic team made up of TA alumni. “Sir Glenn opened up TA to the larger theater world, and I want to continue that exchange of artistic practices. But I also want to go back to those old-school TA vibes, to enhance the bond between alumni and current members, in preparation for our TA [40th anniversary] ball.”

Luarca, who is also faculty member of the Ateneo’s Fine Arts Department, is interested to see the young TA actors use their craft as a medium for social critique and activism. “I wish to burrow deep into the psychology of someone who sincerely believes in strongman rule, to the point that he’s willing to give up his morals for his ‘idol.’”

“As theater practitioners, drama and its processes are our weapons for activism. Theater has to reclaim its role as bangaw ng lipunan—agitating and ever-questioning, ardent in its pursuit to challenge the status quo,” he adds.

“TA has to be socially engaged, and I want to expose its audiences to plays that force you to think a certain way, like how [Bertolt] Brecht forces you to suspend emotion for the sake of pure analysis; or how Shakespeare forces you to think poetically all the time; or how Sir Floy [Quintos] suspends your judgment of the excesses of the Filipino upper middle class to show they also have revolutionary potential.”

Otherwise, he says, “why stage something that doesn’t respond to the big picture?”

“I suppose that’s where my youth enters,” says Luarca. “I’m not afraid to fail, but also unafraid to come up with weird, challenging stuff. In fact, perhaps I invite it, because at least it means we’re doing something new.

“I hate the mentality of ‘Why fix what isn’t broken?’ or ‘Don’t reinvent the wheel.’ Why the hell not?!”