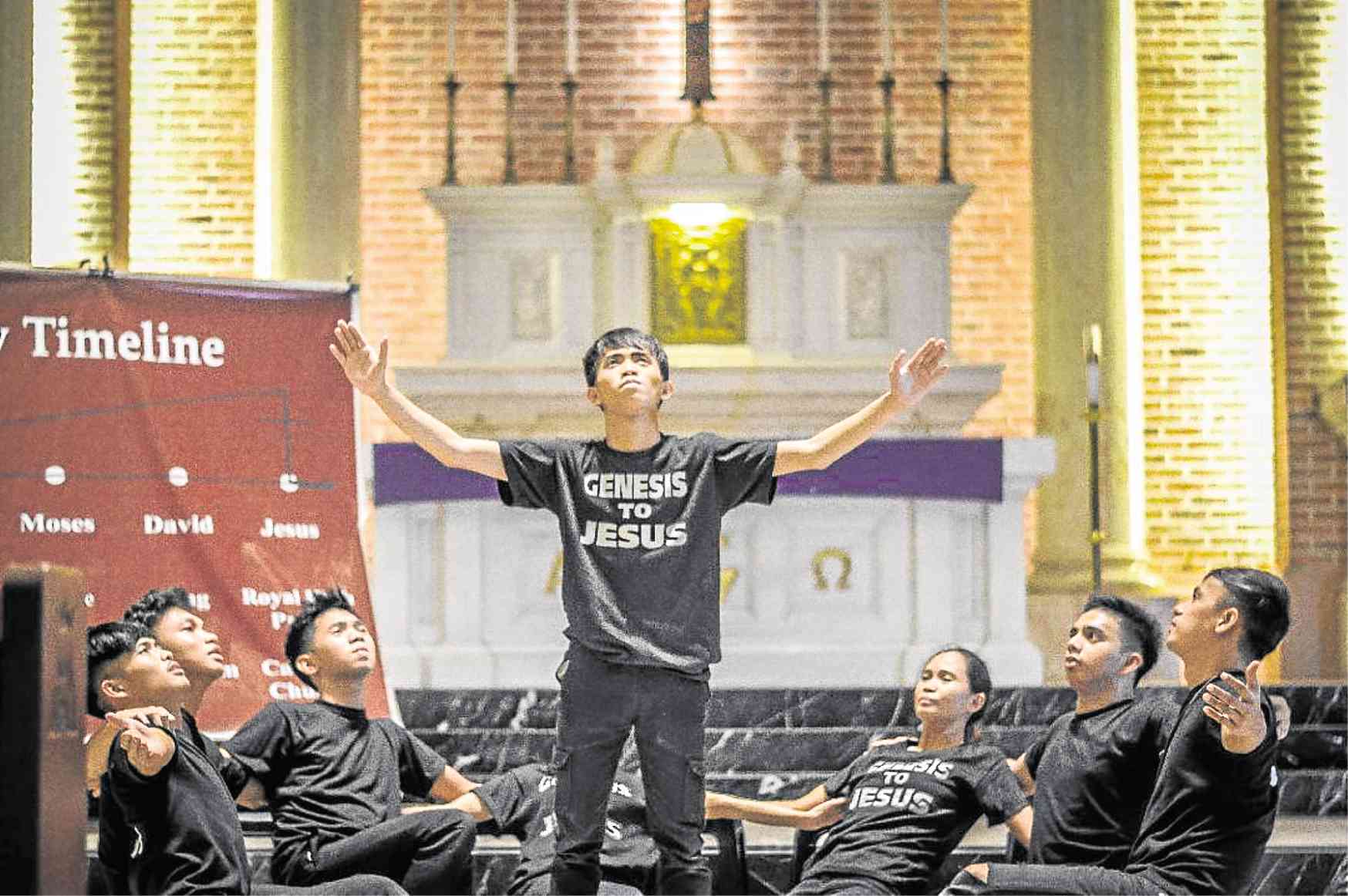 Genesis to Jesus, formed in August 2017, has a stable of nine actors—seven boys and two girls (10 including manager-coordinator Marivic Zulaybar,who also performs). —GENESIS TO JESUS

One is reminded of what American playwright-novelist Thornton Wilder, author of “Our Town” (“Doon Po sa Amin” in Onofre Pagsanghan’s translation), once said: All you need in theater is a bench, a small space and passion. Or something to that effect.

I refer to the Genesis to Jesus drama company, a small but valiant group of nine actors who can sing and dance—seven boys and two girls (10 if you include manager-coordinator Marivic Zulaybar, who also performs). With a minimum of props and an all-black attire with the name of the group emblazoned in red or white on their backs, they perform with brio scenes from the Bible, from the Creation to the Crucifixion.

The fearsome giant Goliath, for example (played by handsome Jiroh Ace Umpad), is held aloft by fellow actors to give him height. And he spreads his hands wide and bellows in a bass-baritone (although he’s a tenor) to threatens David (Tope Abarca).

And there are the other characters from the Bible: God the Father (Joshua Manalastas), Jesus (Jhon Rheymel Lunes, who also played the Serpent until the consultant objected, opining that one who plays Jesus should not be the Serpent during the same performance!), Mother Mary (Rose Lee), Child Raul (John Dave Cajanding), Adam (Derek Draba), Eve (Heidi Dacles), Noah (Abarca), Moses (John Mark Lubay), Abraham (Lubay) and the Pharaoh (Umpad).

Formed in August 2017, the troupe has chalked up 18 performances in Metro Manila, Tagaytay City and Cebu City. They perform in parishes, schools, auditoriums, before seminars and at Christmas parties.

A full performance lasts an hour. At present, they don’t charge professional fees but accept donations.

Genesis to Jesus is mounting a new play that is far removed from Bible stories. It is, in fact, about the Marawi war. A soldier is writing to his son and asks his comrades to make sure that, if anything happens to him, his son receives the letter. The soldier is killed, and what happens to the son after he gets the letter is the crux of the story.

The company is preparing for the Year of the Youth next year and, more importantly, for 2021 when, as manager-coordinator Zulaybar put it, “we will be celebrating our 500 years as Catholics.”

The Bible, she added, “is Jesus’ love letter to us and to the world.” —CONTRIBUTED