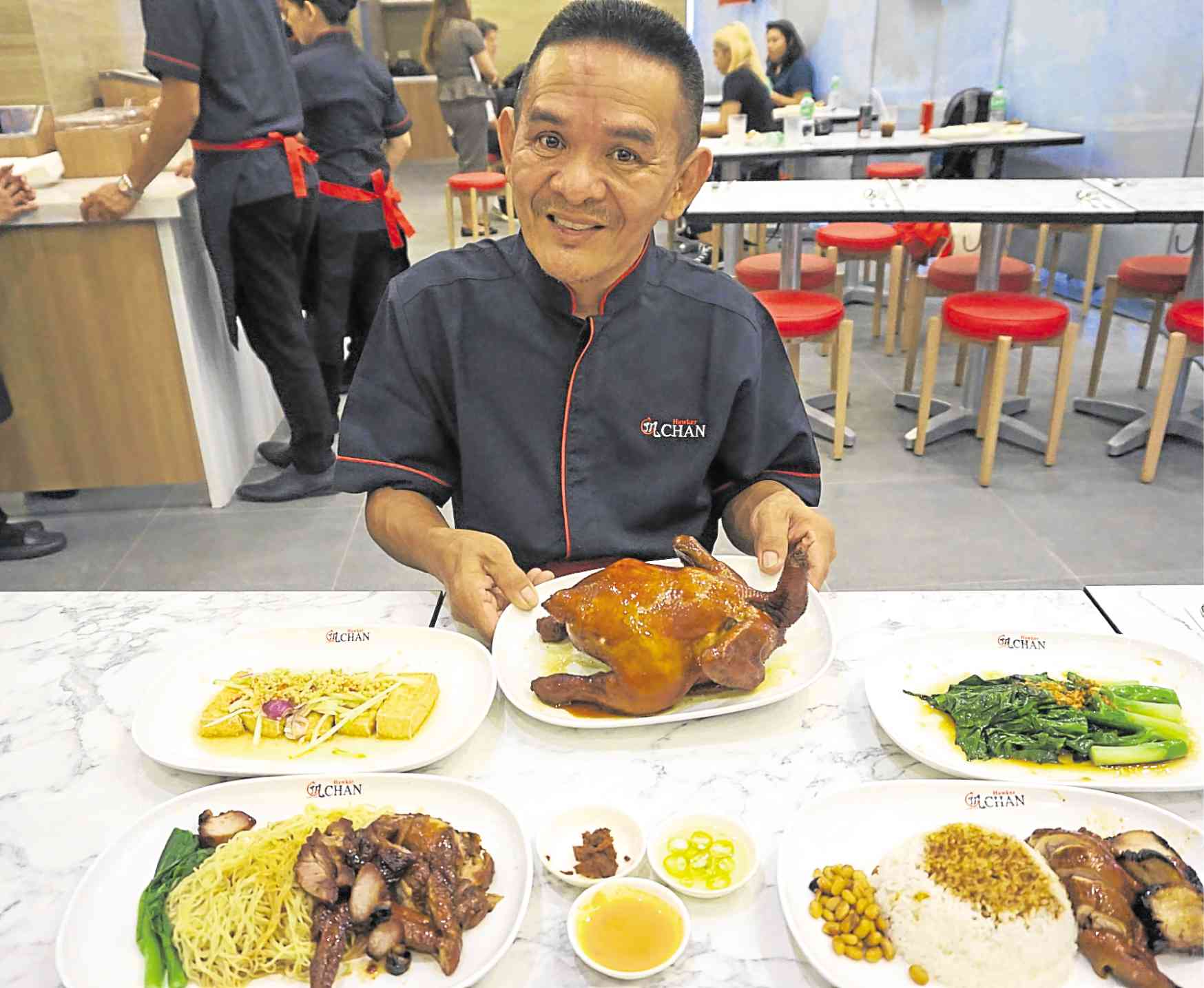 Experience Michelin goodness for a reasonable price at Hawker Chan

At P128, Hawker Chan’s soya sauce chicken rice is the cheapest Michelin Star meal in the world—but get ready to line up for it.

“It’s upgraded fast-food,” Rikki Dee said. He is the CEO of Foodee Global Concepts, the company which brought to Manila other Michelin Star concepts such as Tim Ho Wan and Kam’s Roast.

Super had a taste of the famous chicken rice served by Hawker Chan himself, Malaysian chef Chan Hong Meng, days before the store opening. The savory meat with umami-rich fatty skin is tender and flavorful. It’s the type of ulam that goes well with soft white rice laced with the “secret sauce.”

On the menu are the other roasts: Char Siew, crunchy Roasted Pork and Pork Rib (P148-P198 per meal). Like the Michelin chicken, these can be ordered with rice or choice of noodles—springy yellow noodles or flat hor fun noodles.

Both are “OEM” noodles, Dee said. OEM means the noodles are produced by an “original equipment manufacturer” using the Hawker Chan recipe, since Chan was “very strict with the quality.”

It also took a while for Foodee to find a local supplier for the chicken, which must be around 1.6 kilos each.

Tip: Eat the chicken with pickled green chili and gingery red chili for some heat; pair the pork dishes with some sambal for an extra kick.

Hawker Chan at MOA sits 86. It is a typical fluorescent-lit fast-food joint, but with some refinements: padded red stools and marbleized tables, a window display of meat roasting behind the counter, and a TV playing Chan’s Cinderella story on loop.

The Malaysian cook trained under a Hong Kong chef while working at Singapore’s Chinatown complex in the ’80s.

In 2009, Chan opened his own hawker stall, Liao Fan Hawker Chan, serving the Soya Sauce Chicken Rice which people line up for before the store opening to this day.

Thanks to enterprising businessmen, a proper (and slightly more expensive) Hawker Chan restaurant was established near the OG hawker stall. The Hawker Chan brand eventually reached other cities such as Melbourne, Taipei, Jakarta.

Chan has just received the third consecutive Michelin Star for his Soya Sauce Chicken Rice—the gastronomic equalizer which proves that “Michelin Star” and “cheap” can go together.

The humble chef still does not speak English, but gamely posed for photos during the launch.

Hawker Chan restaurants will soon be opening at Glorietta, Bonifacio Global City and SM North, with a Singaporean or Malaysian chef to be assigned in each branch to keep quality of food consistent, Dee said.

Diners eating at Hawker Chan MOA until Aug. 5 can also win a full-board, two-night stay in Singapore in a raffle sponsored by Foodee and Singapore Tourism Board.