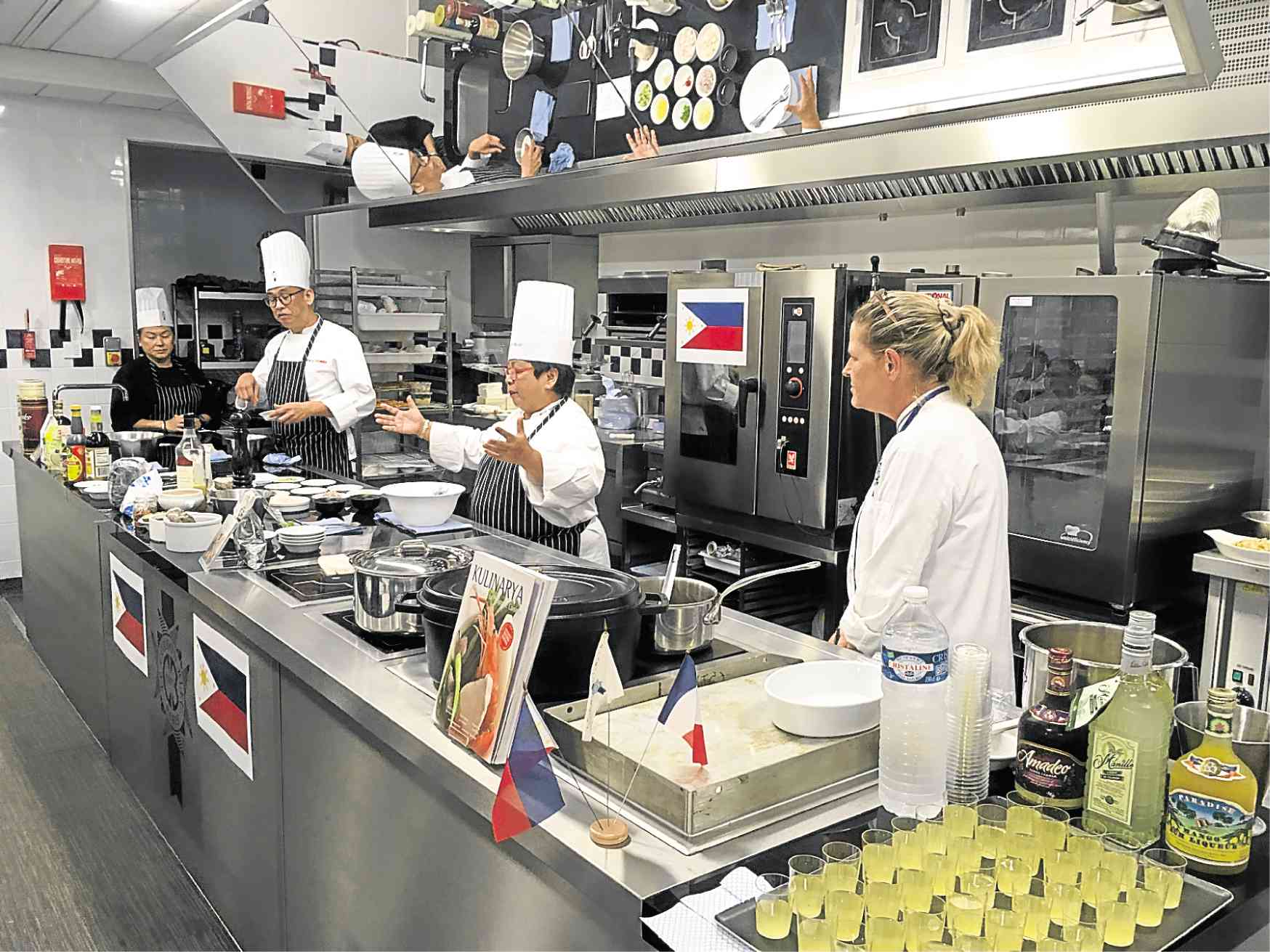 Last June, in the vast basement kitchen of Hotel Intercontinental in Madrid, Spain, and in a state-of-the-art demonstration room at Le Cordon Bleu in Paris, I helped roll fried turon that became a hit among dinner guests in Madrid and culinary students in Paris.

And to think, I can’t even cook.

But that gave me a unique perspective when I tagged along on a three-city gastronomic mission called “Lasap Pilipino (Philippine Flavors): A Culinary Tour with Chef Myrna Segismundo.” (Lisbon leg is for a future article!)

I had been warned that I would be enlisted, should additional hands be needed, despite my disclosure that I could burn rice in a cooker.

Thus, it was less about preaching to the choir of OFWs already buying bagoong, for example, than reaching out to Europeans who may want to try this at home.

“It’s also important for recipes to be simple, and for ingredients to be available in mainstream markets,” said the renowned chef.

Thus, while the tour was a project of the Department of Foreign Affairs’ (DFA) Cultural Diplomacy Unity, Office of the Undersecretary for International Economic Relations (CDU-OUIER), the Department of Trade and Industry (DTI) also sent products—and hopefully, will make such ingredients more available in Europe.

We visited the huge Intercon kitchen, where executive chef Juan Carlos de la Torre literally opened all the doors for us. Raul, Anne and Tippy were soon disappearing into huge freezers full of produce for the picking.

De la Torre, who spoke little English, declared, “Los Filipinos son los mejores empleados.” (The Filipinos are the best employees.) Soon enough, we met Filipino cooks Benjie, Marlon and the soft-spoken Jerry Hilario, known in the kitchen as “El Paellero.” Yes, folks, the best paella in one of Madrid’s most expensive kitchens is made by a Pinoy.

As we worked into the evening, Jerry promised to make us dinner—and after about an hour, produced a huge pan of saffron-colored seafood paella topped with fat shrimp, mussels and squid. It didn’t get any better than that.

During a courtesy call to Philippine Ambassador to Spain Philippe Lhuillier, when asked what food he missed from home, the diplomat exclaimed, “Sisig!”

Prepping for the June 15 sit-down dinner in the hotel’s El Jardin restaurant was like a countdown to a show opening. Raul and Anne turned out perfect plates while humming to themselves. Tippy mastered the art of making turon using less-than-ideal bananas, in the absence of saba.

For cocktails, guests enjoyed a tinapa mousse and an ingenious adobo paté served with pepper jelly, made more interesting with calamansi and honey. This was washed down with Kamanileña, a concoction of Calamansi de Manille Liqueur with calamansi juice and soda water.

Dinner followed, with Myrna annotating each dish: vinegar-cured seafood, or light and fresh shrimp and fish kinilaw, served with avocado and edible flowers; ginger-laced tinolang manok; and a delicious fish fillet smothered in a coco-crab fat sauce (aligui with gata).

A dalandan granita cleansed guests’ palates before they dug into a robust kalderetang baka of tenderloin in tomato sauce, accompanied by pinakbet and a cabbage pouch filled with organic rice. Guests downed this with glasses of Kalayaan, made of Don Papa Rum, calamansi liqueur and Coca-Cola.

People almost licked their dessert bowls clean after a serving of guinataan, mixed fruit and tubers in coconut milk, and petite turon served in a shotglass of Malagos chocolate, all concluded with a cup of salabat.

After Myrna introduced the much-applauded team, Ambassador Lhuillier also thanked the 50-plus guests who came to the 75-euro dinner—even if a Spain-Portugal World Cup football match was happening that evening!

We bid Madrid adios and arrived in Paris on a drizzling midday. Here, Myrna was to set a record of sorts—as possibly the first Filipino chef to hold a cooking demonstration at Le Cordon Bleu Paris, an institution synonymous with culinary excellence for over 120 years.

A convivial Ed Francisco, deputy director of DTI’s Philippine Trade and Investment Center at the Philippine Embassy, took us shopping in popular Filipino stores for the ingredients needed.

At Le Cordon Bleu’s naturally-lit four-story building in the 15th arrondissement, fronting the Seine, we were warmly welcomed by events and communications coordinator Catherine Baschet, who showed us around the school.

Highlights were the Asian kitchen with its woks and tandoor ovens, a concession to the increasingly global profile of the 20,000 students who enroll annually in 37 branches worldwide, and a delightful 800-square-meter rooftop vegetable and herb garden, one of the largest in Paris, complete with beehives for collecting honey.

We also met the charming assistant culinary arts director of the school, chef Philippe Groult, who wore a red, white and blue ribbon around his collar. That signified that he was an MOF, a Meilleur Ouvrier de France, winner of a very prestigious craftsmen’s competition held in the country every four years.

We were in the demonstration room by midmorning on July 17, and Chef Groult had assigned Daily Diniz, a Brazilian chef de partie working at Le Cordon Bleu, to help out (yes, she’s been to Boracay).

Also showing up on her day-off from school was Gem Guina, a Filipino baker from Baguio who had sold her shop to take a patisserie course in Paris.

Gem wasn’t the only Filipino we met, though. There was Anton Pages, a Cordon Bleu executive in charge of the diploma program, as well as bubbly Maribel Parungao, a kitchen assistant who came to Paris 17 years ago from Candaba, Pampanga. It was a proud moment, seeing the Philippine flag hung beside the school logo.

The school’s top toque, culinary arts director chef Eric Briffard (also MOF), was introduced to us, with chef instructor Olivier Guyon, and the two were soon munching on turon.

A special guest flew in to introduce Chef Myrna: no less than Charles Cointreau, son of Le Cordon Bleu International president André Cointreau. The soft-spoken executive, who came from London for the event, confirmed that first, the school would indeed open in Manila in September, and second, Myrna had been invited to join the industry advisory board of the school.

For over an hour, an audience of embassy officials and culinary students were regaled by Myrna, who described Filipino flavors and the cuisines of freshness and fire, embodied by raw seafood and vinegar. After every exposition was a tasting—of kinilaw, adobo over rice and adobo paté, and turon con chocolate.

A seasoned lecturer, Myrna piqued the audience’s curiosity with her intriguing answer to the Parmesan cheese grated over dishes: a block of Philippine duldul, salt packed with minerals and organic matter, naturally formed, looking like a rock fossil, but with a more complex saltiness.

When frying turon, she advised listeners to sprinkle the sugar while the pieces cooked, and not before wrapping the banana, for better caramelization. “If you want to do it the Cordon Bleu way,” she joked, to much laughter, “you do this”—sprinkling the sugar from a height, with a flourish—“and charge another 15 euros.”

It was certainly another proud moment to see students nodding in pleasure with each bite as they took notes, chefs Briffard and Guyon digging earnestly into adobo, and the poised Madame Baschet squirreling away her fourth and fifth pieces of turon (“Oh, wonderful, wonderful!”).

“It’s a fantastic way to promote Philippine products, in front of the best future restaurateurs in the world, in the best culinary institute in the world,” said Ambassador Lazaro, also between turon bites.

After a lively open forum, the demonstration ended with applause, photo requests, and probably the ultimate proud moment of the day: Charles Cointreau presenting Myrna with a certificate of appreciation for sharing Filipino cuisine with the world—and for showing, beyond any more doubt, that beloved flavors from the Filipino table can certainly hold their own, up there with the world’s best.