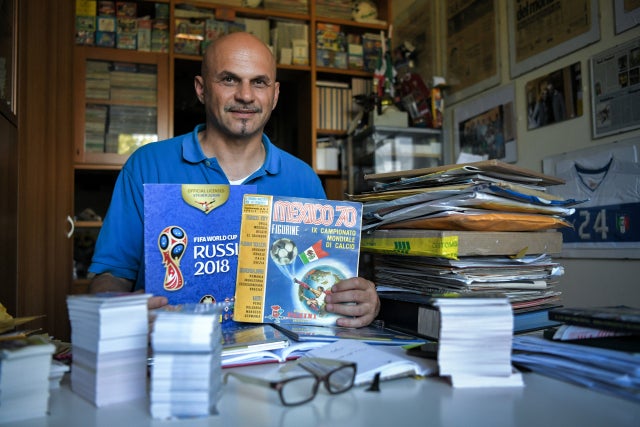 Stick it like Gianni: Italian scores with football album collection

Newspapers recalling decades of sporting glory line the walls, cupboards overflow with stickers of footballing legends and on a desk, pristine packets lie tantalizingly waiting to be opened: welcome to the home of Gianni Bellini, the man with a claim to the biggest football sticker album collection in the world.

Bellini boasts 4,000 complete albums filled with some two million stickers and another 400,000 yet to stick in.

“Every day after I’ve finished work and picked up my grandson from school, I spend at least 4 to 6 hours working on them,” Bellini tells AFP.

The 54-year-old typographer lives in the small town of San Felice sul Panaro around 30 kilometers (18 miles) from Modena, the heartland of renowned sticker maker Panini.

He began his collection around age 13, before taking a small break a few years later, “more interested in girls” than stickers, he admits.

But soon after getting married aged 19, Bellini picked up where he left off, and published ads in newspapers around the world looking for fellow collectors to exchange albums with.

“I received 600 to 700 letters a month, it was the start of correspondences and friendships, many of which I still have today,” he laughs.

And his wife Giovanna, who is also a football fan, doesn’t mind her husband’s diehard hobby.

“I support him and I’m happy too. That way he’s always at home, where I can keep an eye on him, he doesn’t go to the bar,” she jokes.

Every day, Bellini checks for new products online and keeps up with his some three hundred correspondents.

“I send about 5,000 emails a year,” he says, pouring over a large diary where everything is logged.

His entire collection is also archived on his computer.

“It’s an amazing feeling to finally have the album in your hands,” says Bellini as he opens a fresh packet from Mexico.

“But once that emotion is over, you’re already thinking about the next album.”

Bellini spends 4,000 to 5,000 euros a year on his albums which are stored carefully at a temperature of 23 degrees.

Nothing is for sale because “the real collector buys, exchanges, but does not sell,” he says.

Bellini’s most prized album is that of the 1970 World Cup in Mexico: “Panini’s first international album,” he says proudly.

On the other hand, the thought of the 1986 Egyptian championship album still makes him shudder: the album got lost when he sent it to be translated and he only found another copy 20 years later.

For Bellini, the albums are also a record of shifts in modern culture because “over the years, you see the changing hairstyles, shirts etc.”

The Panini factory in Modena has become almost a second home for him and he buys albums and stickers directly from there.

Although the Italian publisher represents only around half of his collection — there are other manufacturers, such as Topps which holds the rights to the Champions League — Bellini insists that Panini is “the best.”

He also regularly holds exhibits of his collection and is involved in a project to open a museum in Chiasso, Switzerland, expected to be inaugurated in mid-2019.

Bellini hopes that his seven-year-old grandson will share his passion, but he’ll have to earn his stripes.

“He must understand that he must buy a package, exchange the pictures he is missing with his friends… Opening a package is like finding some treasure, you never know if you’ll find the image that you’re missing, that’s what’s beautiful.” NVG