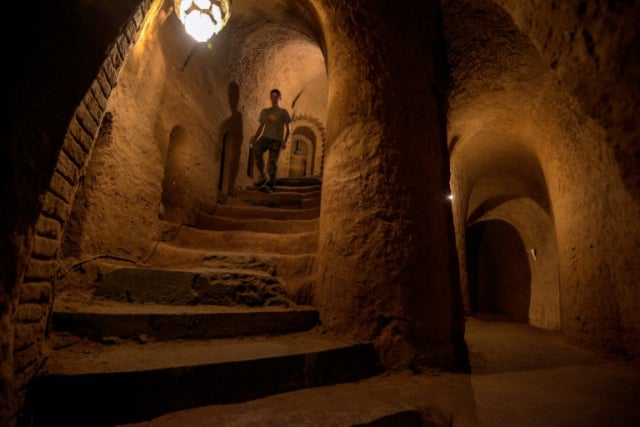 The underground network of tunnels is a major tourist attraction in Arinj, just outside Armenia's capital. Image: KAREN MINASYAN

When Tosya Gharibyan asked her husband to dig a basement under their house to store potatoes, she had little idea the underground labyrinth he would eventually produce would prove to be one of Armenia’s major tourist draws.

Their one-story house in the village of Arinj outside the capital Yerevan may not look like much but today it brings in visitors from all over the globe after a 23-year labor of love by Tosya’s late husband, Levon Arakelyan.

They come to see a twisting network of subterranean caves and tunnels known as “Levon’s divine underground.”

In the cold and quiet, Tosya leads tourists through corridors that connect seven chambers adorned with Romanesque columns and ornaments like those on the facades of mediaeval Armenian churches.

“Once he started digging, it was impossible to stop him,” she said of the project that began in 1995. “I wrangled with him a lot, but he became obsessed with his plan.”

A builder by training, Levon would toil for 18 hours a day, only pausing to take a quick nap and then rush back to the cave, confident that he was being guided “by heaven”.

“He never drew up plans and used to tell us that he sees in his dreams what to do next,” his widow told AFP.

Over more than two decades he hammered out the 280-square-metre (3,000 square-foot) space, 21 meters deep into strata of volcanic rocks, only using hand tools.

“My primary childhood recollection is the loud knock of my father’s hammer heard at night from the cave,” said his 44-year-old daughter Araksya.

At the start, he had to break through a surface layer of black basalt, but at the depth of a few meters Levon reached much softer tufa stone and the work progressed.

He pulled out 600 truckloads of rocks and earth, using only hand-held buckets.

Levon died in 2008 at the age of 67 from a heart attack after destroying the last wall that separated two tunnels.

A decade on from the project’s completion, Tosya also runs a small museum commemorating her husband’s work in the village of some 6,000 people.

The underground complex has several analogs in the world.

An eccentric man named William Henry “Burro” Schmidt spent more than three decades digging a half-a-mile tunnel to transport gold through a granite mountain in California, beginning his work in the early 1900s during the state’s gold rush.

In Ethiopia, a man named Aba Defar began carving churches on a mountainside after claiming divine inspiration from years of dreams.

He said it made him realize just “how boundless the spiritual and physical capabilities of a person can be”. NVG