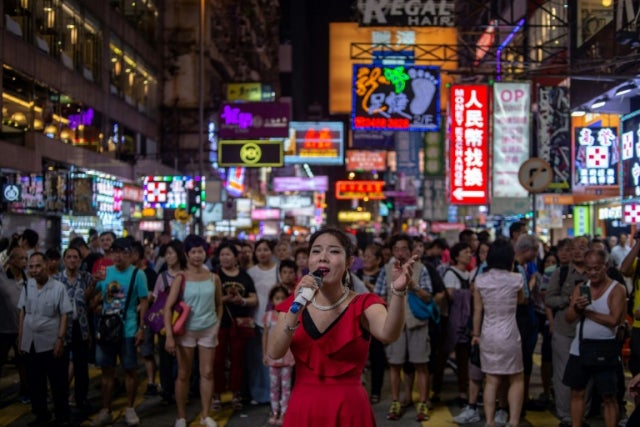 The rumbustious street performers who have long claimed one of Hong Kong’s busiest shopping districts as their informal stage took their final bow Sunday night after local authorities caved to noise complaints over their legendary cacophony.

Under the glow of Mong Kok’s famous neon signs, buskers have been entertaining crowds — and irking neighbors — for nearly two decades in Sai Yeung Choi Street South, an area which has been regularly closed to traffic to make way for pedestrians and performers since 2000.

Over the years, a motley line-up including an acrobat in his sixties performing stunts to Michael Jackson and karaoke bands surrounded by fans clapping along on plastic stools gave ear-splitting shows to tinny music blasted from amplifiers.

Drawing cheers and consternation equally, the street performers have received 320 noise complaints in just the first half of the year, according to police, with local media reporting 1,200 complaints last year.

The pedestrian zone will be fully abolished and reopen to traffic starting on August 4.

But while some will be relieved that the plug is being pulled, others fear authorities are killing off the city’s vibrant street culture with over-regulation.

Just next to the freestyle performance area, official attempts in 2016 to remove unlicensed hawkers triggered some of the city’s worst clashes for decades as protesters used the occasion to express their anger towards Hong Kong’s dwindling autonomy.

Ahead of the shutdown of the busking zone, bands in glittery outfits, elderly men and women dancing the cha-cha, and “singing aunties” from mainland China — who have joined the pack over the years to the displeasure of some locals — came out over the weekend.

The pedestrianized strip’s last days have also attracted higher-profile entertainers like actor Bobby Yip, who visited on Saturday and was instantly recognizable with his blunt bowl-cut hair.

“This is like a nightclub for ordinary people… I hope the government will support this street culture,” Yip told local newspaper Apple Daily.

But residents and shopkeepers nearby say the constant cacophony has given them a headache, at times literally.

“It does create trouble in our daily lives, including disturbing my son’s study,” Gabriel Wai, who lives in the area, told the South China Morning Post.

The local district council passed a motion in May to scrap the zone.

WiFi Band, who have performed in the area for the last few years, say the group might relocate to Causeway Bay’s Times Square or Tsim Sha Tsui — also busy commercial districts thronged with tourists and shoppers.

Drummer Miss Cheng from the band told local news site HK01 she was sad about the busker community’s dissolution as performers could get more interactive with the audience in Mong Kok.

“Perhaps we would only bring guitars (over there), because transportation is less convenient, plus you can’t be as loud,” she said of the new locations. CC