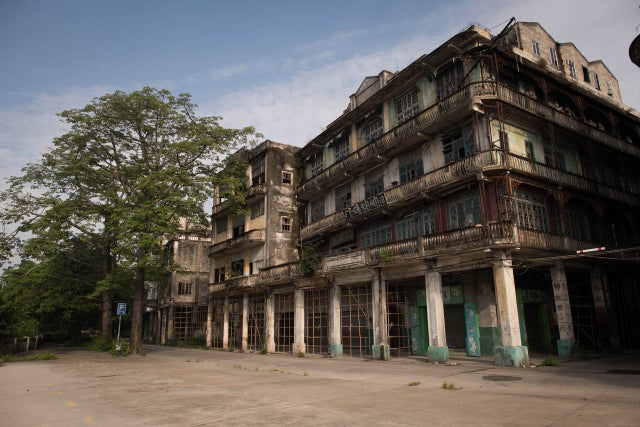 Chikan was listed as a UNESCO World Heritage Site in June 2007 due to its 19th- and early 20th-century houses, which feature a unique mix of European and Chinese architecture, clock towers and intricate stone wall carvings. Last year municipal authorities announced a plan for its historic buildings to become hotels, bars, restaurants, trinket shops and cafes for visitors who pay an entrance fee. Image: AFP/Nicolas Asfouri

A year ago, customers queued round the block for Wu Ying’s red bean and coconut ice puddings, but now the 60-year-old has to vault a barricade to reach her dessert shop.

Wu is one of several dozen inhabitants of a historic section of the town of Chikan in southern China who are stubbornly holding out against government pressure to sell their properties to make way for a “heritage” theme park.

Chikan was listed as a UNESCO World Heritage Site in June 2007 due to its 19th- and early 20th-century houses, which feature a unique mix of European and Chinese architecture, clock towers and intricate stone wall carvings.

But locals say the international attention has been a curse.

Its historic buildings will become hotels, bars, restaurants, trinket shops and cafes for visitors who pay an entrance fee.

Chen Jiewan, deputy mayor of Kaiping city where Chikan is located, said the project aims to “protect Chikan’s cultural relics” and draw tourist spending, urging everyone to “work overtime” toward a targeted trial opening next year.

Nearly 4,000 households received government notices urging them to move out immediately, with most of them accepting compensation offers.

But at least 58 households have refused and received “final notice” letters in late May.

“People were too scared to push back. It is totally absurd that they are kicking out all the people in the name of preservation,” complained Wu.

Authorities have barricaded some streets, and red banners on padlocked storefronts exhort villagers not to “stand in the way of progress.”

Such situations are not uncommon in historic parts of China, with deals cut between local governments and developers.

In 1999, all residents were evicted from the ancient “water town” of Wuzhen near Shanghai, which now charges visitors 200 yuan ($30) for tickets to take canal boat tours of the town.

Local officials are often under pressure to preserve heritage sites, but the resulting projects “often become so commercialized that they don’t always take grassroots perspectives into account,” said Leksa Lee, a specialist in the business of cultural heritage in China at New York University Shanghai.

Holdouts in Chikan, which is in Guangdong province, say the offered compensation of between 3,200-3,900 yuan ($472-$575) per square meter is nowhere near enough to purchase a small apartment in the area.

The average cost of new homes in the nearby provincial capital Guangzhou in 2017 was 20,000 yuan per square meter.

Wu said she and some neighbors who staged a protest last autumn were arrested and jailed for several days.

“To get rid of the house would mean breaking the bonds to our family,” said Lou, as he placed small teacups and chopsticks at a family altar at his home to pay respect to the clan’s ancestors.

Referring to relatives overseas who helped fund the renovation, he added: “What reason would they have to come back? None of it will be ours anymore.”

If residents reject the deal, the issue will “enter the judicial process” and property owners will forfeit compensation, a statement on the Kaiping city government’s website said. Local officials did not respond to AFP’s questions.

“Who would help us?”

Paulinda Poon, an American flight attendant who grew up in Chikan, is among the overseas former residents who return frequently.

In 2016, she traveled to Beijing to deliver a letter to the Foreign Ministry about the “unfair” Chikan situation. Officials there told her it was a local matter.

Poon visited Chikan again recently and was struck by how it resembled a “ghost town” compared to a visit last year.

Coming across a small group of residents on the riverfront, she asked if they had consulted a lawyer, and one man replied: “Who would help us?”

Poon later visited an elderly cousin at a temporary shelter for displaced residents. Inside the intense heat of the metal structure, her cousin broke down and cried.

Her family members had scattered and she hadn’t had a visitor in half a year. CC