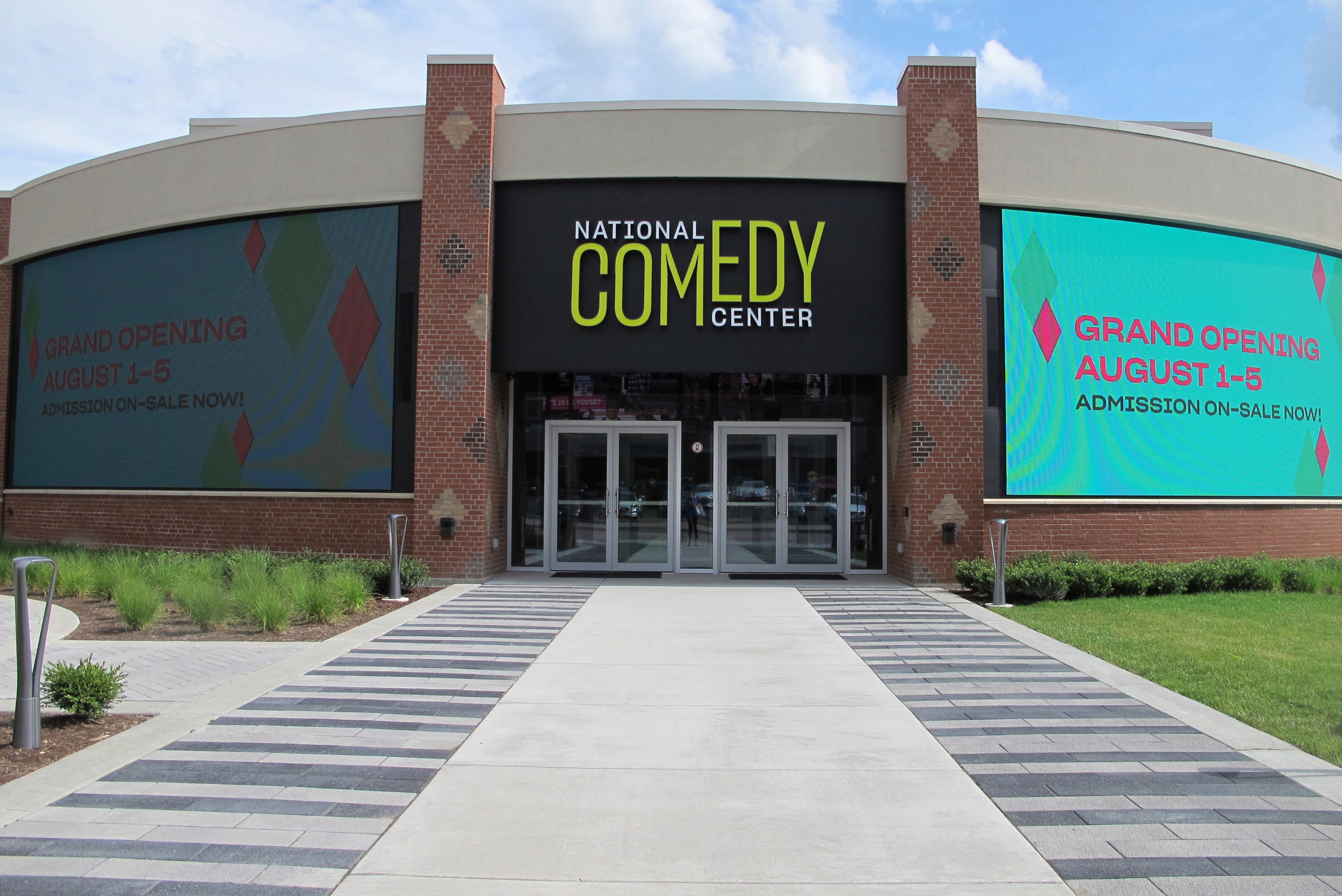 In this July 24, 2018 photo, the main entrance to the National Comedy Center in Jamestown, N.Y. is shown. The center was inspired by the late Lucille Ball, who wanted her hometown to be a destination for people to learn about and celebrate comedy as an art form. Its grand opening celebration starts Aug. 1. Image: AP /Carolyn Thompson

JAMESTOWN, New York — Comedian Billy Crystal asks the question in a video that welcomes visitors to the National Comedy Center.

It may be as good a reason as any for the construction of the high-tech new center devoted to what has made people laugh from Vaudeville to now.

But there’s more to it.

The nonprofit center in Jamestown was inspired by hometown hero, Lucille Ball, who envisioned a place where comedy would be celebrated as an art form. The city of about 30,000 people in the southwest corner of New York already is home to the annual Lucille Ball Comedy Festival and the Lucille Ball Desi Arnaz Museum.

“But it was always (Ball’s) preference that Jamestown become a destination for the celebration of all comedy in a way that would foster and inspire the next generation of artists,” says National Comedy Center Executive Director Journey Gunderson. “What we’ve done here is finally bring her vision to fruition.”

Located in a repurposed 1930 art-deco train station, the center is part museum, part hall of fame and part video arcade, keeping visitors smiling as they move through displays of comedic artifacts. There’s the “puffy shirt” from a 1993 “Seinfeld” episode and scripts from the 1960s “Dick Van Dyke Show” along with lively immersive exhibits that invite visitors to explore sound effects and props and make cartoons and memes.

The bravest can take the stage in “Comedy Karaoke”, trying out lines from Jeff Foxworthy or others, or sit at a game show-like set and try to crack up an opponent. But there also are plenty of chances to laugh at the pros in action. A club-like comedy lounge shows stand-up bits, and a movie theater has clips of classic scenes with celebrity commentary. A hologram theater initially will feature Jim Gaffigan’s evolution as a performer.

“I’m stunned by the technology,” says Andrew Tangalos of Charlotte, North Carolina, who with his wife, Bonnie, was part of a group invited to test the exhibits on Tuesday before the official opening. They started by selecting preferred comedians, shows and movies at a lobby kiosk. After tapping computer-chip enhanced bracelets at exhibits, the couple’s last stop was a station that revealed their comedy profile. It told Bonnie she leaned toward satire and observational humor.

The 37,000-square-foot (3,437-square-meter), $50 million center received $9 million in funding from New York state, along with private and federal support.

The House of Representatives on July 23 unanimously approved a bill designating it as the nation’s official comedy center. US Sen. Charles Schumer, whose cousin, comedian Amy Schumer is in the opening week lineup, is working on Senate action.

“Comedy is important to celebrate as an art form because it’s not been celebrated at all, ever,” comedian Lewis Black says on the center’s welcoming video. He is part of the center’s largely celebrity advisory board, along with Gaffigan, Carl Reiner, Laraine Newman, W. Kamau Bell, Paula Poundstone and others.

Board member Kelly Carlin, daughter of the late George Carlin, gave the center seven trunks full of her father’s materials, including his creative files, handwritten journals and arrest records resulting from his “Seven Words You Can Never Say on Television” routine.

Those seven words get star treatment in the center’s lower-level, adults-only “Blue Room”, reserved for the material that’s gotten comedians into trouble over the years.

“Down in the Blue Room it’s completely uncensored and we actually address a lot of topics like the history of taboo, censorship, seven dirty words and things like that,” Gunderson says. Among displays is the trench coat Lenny Bruce would wear in anticipation of going from stage to jail.

“There’s enough content in here that you could spend a week and not see everything,” says Stephen Platenberg, creative director of Cortina Productions, the McLean, Virginia, interactive design firm for the project.

“I hope people leave here having a great time, seeing some cool content that’s nostalgic or makes them laugh, doing some things they never thought they’d do,” Platenberg says, “but then also learn about something about their sense of humor and comedy in general.” CC