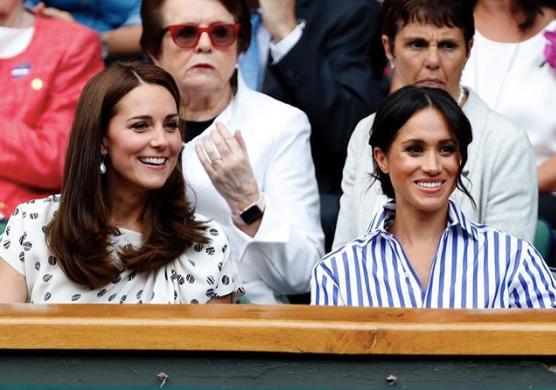 The Duchess of Cambridge and the Duchess of Sussex attend the 2018 Wimbledon Ladies' Singles final. Image: Instagram/@kensingtonroyal

Another week, another Thomas Markle tirade.

Meghan Markle’s father, a former Hollywood lighting director, has unleashed another fiery interview, with the Mail on Sunday—allegedly without being paid for it — last Saturday, July 28. The interview lasted for nine hours over three days.

He said he hasn’t spoken to Markle in over 10 weeks, but the radio silence from his daughter and the British royal family seems to only have further encouraged him to submit to press interviews.

The man who staged paparazzi photos to improve his image to the press before his daughter’s wedding to Prince Harry swiveled from self-pitying to enraged in the interview.

A few excerpts: “She’d be nothing without me. I made her the Duchess she is today. Everything that Meghan is, I made her,” he claimed, noting that he paid for her private school education and vacations abroad.

He lamented not being able to meet a future grandchild and believes that Meghan would prefer if he died because she would gain public sympathy. Still, he said, “I’d hate to die without speaking to Meghan again.”

He even invoked the name of Princess Diana: “[The royal family] have Meghan treating her father in a way that Harry’s mother, Princess Diana, would have loathed.” He also said that Meghan would do a better job in modernizing the royal family than Diana did.

Vanity Fair reports that the Duchess of Sussex has found allies amid the family chaos, one of them being sister-in-law Kate Middleton, who has been a “pillar of support.”

Meghan is reportedly “at her wit’s end” on the issue and feels betrayed that family members still speak to the press despite having asked them to remain private. The Duchess of Cambridge is said to be “sympathetic” to Meghan’s ordeal.

Despite having “different characters,” Kate has reached out to Meghan amid work commitments and raising three children. A source says they try to see each other at least once a week for tea at her Cambridge apartment with Prince William.

Kate has also offered some royal fashion pointers through London-based designers such as Emilia Wickstead. They have also spent time out together, bonding over the Wimbledon women’s final last July 15, where Meghan’s close friend Serena Williams was playing.  Niña V. Guno /ra