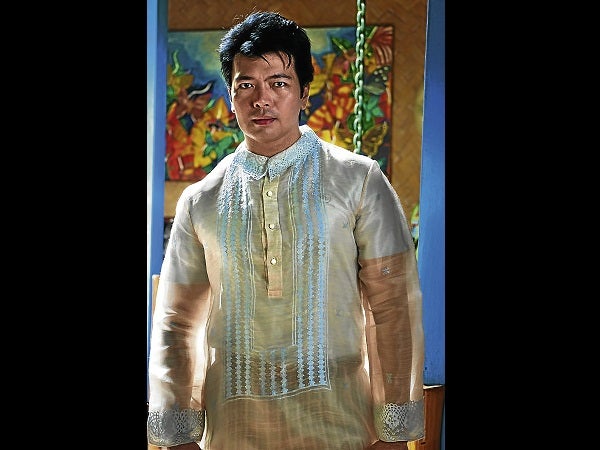 For this special shoot that pays tribute to Kasuotang Pilipino, Lito Perez, president of the 30-year-old Fashion Designers Association of the Philippines, brings back the high-style luxury of Barong Tagalog as worn by the elite ilustrado class in the Spanish era.

“They were men of cosmopolitan style,” notes Perez of Camp Suki fame, “who traveled frequently abroad, usually in Europe, and were up-to-date on the latest in menswear and male grooming.”

“It’s inspired by the stately silhouettes the European aristocrats wore at the turn of the century. The collar is high and standing to give the wearer a dignified appearance; the embellishments rich and elaborate; and the fabric elegant as our piña,” says Perez.

To contemporize his collection, Perez tapers the barong close to the body, and uses colorful shades of piña embellished with embroidery and beadwork. For a metallic black piña barong, for instance, he uses white lace embroidery to accentuate the cuffs, with mother-of-pearl stones for buttons.

On a yellow piña with amber silk thread embroidery on the bodice, Perez uses a burst of matte gold beadwork on the collar and on the loose, buttonless cuffs.

The perfect setting for the colonial-inspired collection is the historical town of Pila, Laguna, famous for its grand period homes. According to Philippine historian Dr. Luciano Santiago, Pila is the only town in the country that is formally recognized as an important historical site by the Church and the State.

In 2000, the National Historical Institute of the Philippines declared the town plaza of Pila and its surrounding colonial houses a historical landmark. The town has 35 well-maintained, turn-of-the-century structures, of which 28 are ancestral.

In 2002, the Diocese of San Pablo proclaimed the parish church of San Antonio de Padua de Pila as the Diocesan Shrine of St. Anthony. It is the first Antonine church in the Philippines and was built by the Franciscans who arrived in Pila in 1578 to spread the Catholic faith.