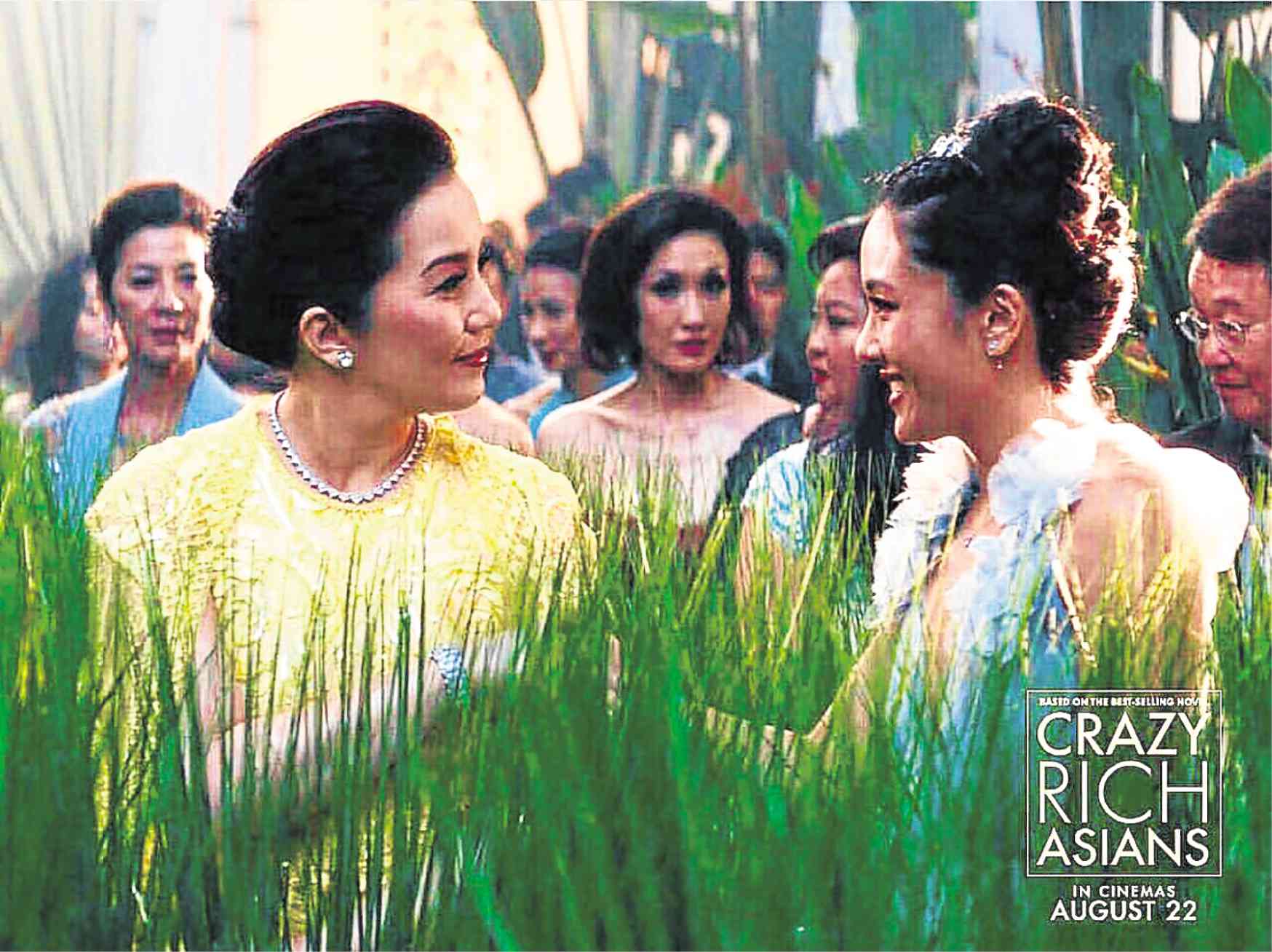 Crazy-talented Filipinos have landed supporting roles in the hotly anticipated “Crazy Rich Asians,” the film adaptation of Kevin Kwan’s best-selling novel of the same title. It premieres in Manila on Aug. 22.

By roles, we mean not just Fil-Am actor-comedian and “Superstore” star Nico Santos, who plays the character Oliver T’sien.

Viewers also ought to look out for blink-and-you-miss-them works by a couple of Filipino designers featured in the film—Neil Felipp San Pedro and Michael Cinco. They share the spotlight with such global  brands as Dior, Carolina Herrera, Giorgio Armani, Elie Saab and Ferragamo.

Last Monday, Kris Aquino, who has a cameo in the Asian-American rom-com, posted a still from the movie on Instagram, showing her with the lead, Constance Wu (“Fresh Off The Boat”).

Aquino is wearing a set of stunning diamond jewelry with her yellow dress made by Dubai-based Filipino couturier Michael Cinco.

Aquino is said to have commissioned other Filipino designers for options for her Hollywood debut, but ultimately went for Cinco, whose clientele includes Middle East and Southeast Asian royalty and Hollywood celebrities like Jennifer Lopez and Lady Gaga.

Cinco tells Lifestyle that Aquino’s stylists, Kimi and Boop Yap, got in touch with him two weeks before the actress’ shoot in Singapore. Aquino messaged him her specifications: She wanted a dress in yellow for her cameo as a Southeast Asian princess.

Cinco made a tulle and chiffon dress with full calado-inspired embroidery.

The Samareño says he has never met Aquino, but “after she saw the dress, she sent me a thank-you message, which is very rare for stars that I dress up, to express their appreciation.”

Unlike Cinco, who’s accustomed to Hollywood celebrities and royalty, Cebu’s Neil Felipp San Pedro, 28, has a young career that got a major boost when Kwan saw one of his minaudieres during his first book tour in Manila in 2015, and namedropped his brand, Neil Felipp, in “Rich People Problems,” the third book in the “Rich” trilogy.

During Kwan’s book tour a year ago, he asked San Pedro if he would be interested to have his bags featured in the film, where Kwan is executive producer. In a heartbeat, the young man, who had just met the author, said yes.

“He was very kind, humble and insightful as he shared with me his creative process, his love for Asia, and how impressed he was with my designs,” San Pedro says of Kwan.

The Cebuano designer presented his works to the film’s costume designer, Mary Vogt, who gave him the specifics. About 10 minaudieres were sent to the studios.

A New York journalist who has been to a pre-screening has told San Pedro that his Suzy Wong minaudiere—the same style mentioned in the book—is seen on Astrid Leong, the chic-est character in the book trilogy.

“I’m not sure about the other designs, but the costume designer has told me that only the principal actors will be using the bags,” San Pedro says.

The Suzy Wong is an ovalish evening bag in black shell with sculpted brass dragon clasp in gold.

In an e-mail to Lifestyle, Kwan wrote: “I wanted ‘Crazy Rich Asians’ to be a showcase for all the amazing design talent that exists in Asia, and Neil is the embodiment of this. His work is astoundingly exquisite, original, and sought after by the most fashionable women in Asia.”

In an interview with South China Morning Post, Vogt had said that “designers were clamoring” to dress the film’s stars when they began production in Malaysia; Ralph Lauren, for one, sent 30 dresses for the filming.

But even with a wealth of global brands at their disposal, some actors like Aquino and Malaysian superstar Michelle Yeoh used pieces from their personal collections.

The same Hong Kong article said that Yeoh used her own jewelry for her role as the sophisticated Singaporean tai-tai Eleanor Young.

Owing to the fantastical plotline, this is one of those Hollywood films where the costumes and scenography are as much the star as the stars themselves—the nuanced gloss and luster of both Asia’s old- and nouveau riche.

For a young designer like San Pedro, the shoutouts on the book and the film have been a major boost to his young brand. The exposure has found Neil Felipp representation by a New York company in the US.

“Crazy Rich Asians” tells the story of Rachel Chu, a New York economics professor who comes to Singapore to meet her boyfriend Nick Young’s family, unaware that the Youngs are über-wealthy, and Nick is the Asian Prince Harry that every tai-tai wants for her daughter.

It is the first major Hollywood studio (Warner Bros.) movie with an all-Asian cast in 25 years, after Disney’s “The Joy Luck Club” in 1993.

It’s based on the international bestseller by Singapore-born American Kwan, and is a parody of the lavish and extraordinary lives and lifestyles of the continent’s filthy rich, a world in which Kwan lived until his family moved to the US when he was 11.