Who can say no to Derek Ramsay? | Inquirer Lifestyle ❮ ❯ 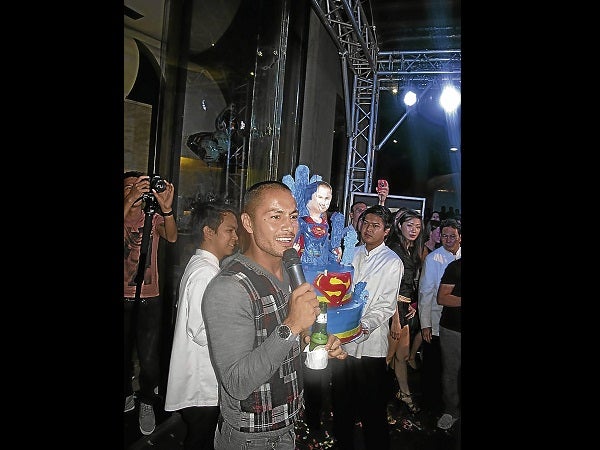 Who can say no to Derek Ramsay?

Imagine my delight when I got a text that read, “Pls. come to my birthday @ Lusso in Greenbelt 5. Intimate gathering of my close friends.”

Despite the years I have worked with Derek as a model, actor and top endorser, working with him was never really work; it was more of catching up with what’s happening with one another.

Derek from the onset has never treated people in the business as coworkers, but as friends. I think that is why so many people are enamored with him. So what was supposed to be an intimate gathering turned out to be a wild and joyous occasion.

Before the party even began, Derek was worried that he only invited 50 of his closest friends, and only a few texted back to confirm that they were coming. Then again, how many Filipinos do you know who actually confirms or RSVP for a party or event? That’s why our birthday boy was worried. But who could resist him? Whether you bat for the other team or not, you would be glad just to be in his company.

Earlier that day, he asked Angelica to accompany him to buy something he could wear that night. I know this, because I had some private time with Angelica; she was worried that she was too casual for the night. I told her she was fine, not to worry.

Apparently, she didn’t even have enough time to go back home and change into her special dress that was meant for the occasion. But nobody seemed to mind, because she was beaming with pride as all the close friends of Derek did show up.

As I walked into the place, you could feel the crazy energy in the air. The crowd was a good mix of show biz people, sports comrades and clients that have become close to Derek—even his old classmates were there.

I knew I was in the right place because even the casual bystanders and passers-by were open-mouthed, surprised to see Derek and Angelica casually greeting their guests as they came in. The paparazzi, as usual, were all over the place.

When Derek saw me, he hugged me tight, like a long-lost brother, and was genuinely glad to see me. Then, like a kid, he pulled out his phone to show me his video of the operation he had on his injured arm. I laughed so hard, and was glad that despite the injury that would stop him from playing his favorite sport, he was in good spirits.

Apparently, he kept showing his video like a trophy of war wound to all his guests. You should see the gamut of reactions and facial expressions of the guests as Derek showed the video. I was dying of laughter.

I then saw Tita Virgie Ramos, the power behind Swatch and Gift Gate, seated with Susan Joven, Anne Curtis, Liz Uy and Chris Tiu. I felt intimidated by the powerful cast of characters assembled in one table. But all that changed when Tita Virgie excitedly stood up to greet me.

Tita Virgie, as she is fondly called by almost all the people in the industry, has been a major force behind my career. I have to credit her for most of my major work that has cemented my reputation in the industry. Yet in spite all that, she has never stopped being both a friend and guiding force in my life. Can’t you sense it? I love her to bits, and I am sure all the other people in the room felt that same way because they all gravitated to her.

As I scanned the room, familiar faces from the industry glittered all over the place. Angelica played host to the constant flow of guests that trickled in. And like at all parties, a game of musical chairs ensued. With the constant tête-à-têtes going on between guests, people found themselves sitting with different people, depending on the conversation or the topic.

The guy he had kissed

That’s when I found the “unkabogable” Vice Ganda seated with Dj Durano and Direk Wenn Deramas, who directed Vice in both “Praybeyt Benjamin” and “Petrang Kabayo.” Derek joined them and proudly announced that Vice Ganda was the guy he had kissed on-screen. Imagine the teasing and jealous heckling from the crowd.

Suddenly, a voice boomed “Happy Birthday!” We all looked and Angelica was singing as a huge Superman cake was carried in. Funny, though, it was so big that they couldn’t get it into the restaurant. So, the cake stayed outside while Angelica kept singing. Then she stopped midway and asked, “Teka, bakit ako lang ang kumakanta?” Then everyone joined in while trying to keep from laughing. Derek stepped out of the restaurant to thank all those present.

The party went on till three in the morning, despite the fact it was the middle of the week and there was work the next day. Some even had 7 a.m. call times the next day. It just showed how much people loved Derek and his company.

In hindsight, I do seldom hear bad things about this guy, and no amount of fame or fortune seem to affect his genuinely down-to-earth persona. What you see is really what you get.

In the world of entertainment, where most actors seem to put up a façade that would benefit their rise, there is always one person that stands out among the rest—an honest, down-to-earth person you can talk to, be friends with, and care for, with no strings attached.

You can credit his parents, or you can credit himself for having a good head and heart. But whichever way you view it, I feel that Derek has gained and will continually gain respect not only from his fans, but from his colleagues. I am more than a fan; I am honored to be called a friend.

I had to say goodbye eventually, and when I did, he hugged me tighter this time and shouted, “This is the guy who made me look good.” I answered, “That you did all on your own.”