Bugs on the table! Wait, they’re on the menu, too! | Inquirer Lifestyle 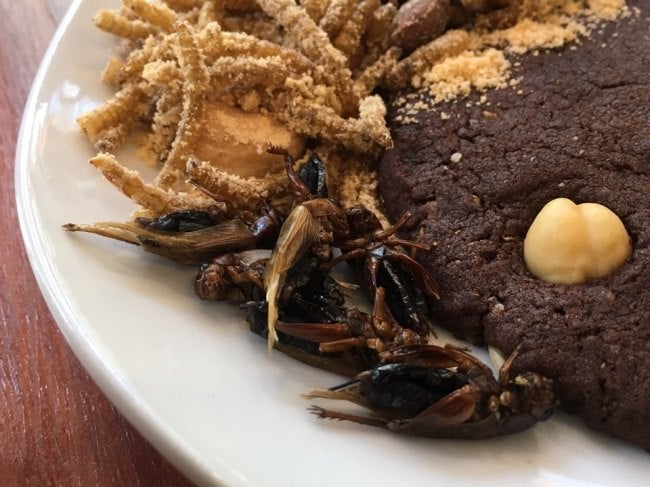 Bugs on the table! Wait, they’re on the menu, too!

SEOUL — We have been told that insects will be a valuable food source in the future. But it is not easy to embrace the idea of having worms, crickets and grasshoppers on our plates.

There are pioneers, however, bringing the future closer to us. While figuring out more efficient ways of farming and retailing edible bugs, they also work on developing recipes, inviting those with brave hearts.

Edible Coffee is a coffee shop in southern Seoul, selling coffee and tea just like any other cafe since 2016. An unaware visitor randomly stopping by may be shocked, however, by the menu that includes cricket tea, mealworm muffin and a silkworm green tea smoothie.

“People who are curious and who want to have the experience visit the cafe,” said Ryu Bo-ah, the marketing manager of Edible Inc., which owns the cafe. The firm, founded in 2013, retails edible insect products on its website. It also sources its products to Olive Young and E-Mart, top local distributors. “Items that show the used insects are popular,” Ryu boasted.

Mealworm, the larval form of the darkling beetle, is the most often used ingredient, and can be found in almost all the menu’s items. It is the main ingredient for cookies, muffins, chips and more. The mealworm chips with nuts is a top recommendation on the menu. The seasoned mealworm crumbles like a potato chip.

“For making the food, we do not really have to use whole insects but rather grind them. But as customers prefer to see the bugs, we sprinkle the bugs as toppings,” Ryu said. Imagine!

Surprisingly, the taste is more than delicious. One would not be able to guess that the sweet smoothie is made of dried mealworms. It tastes similar to a tasty grain drink. The look of the smoothie packed with protein does not betray its main ingredient.

Various kinds of packaged bugs — crickets, silkworms and maggots — are on sale at the cafe. They can be purchased for between 5,000 won and 10,000 won. Many of the cafe customers actually come just to purchase the products.

Cricket is perhaps the most challenging menu in the packaged insects group. The unprocessed cricket looks just as it does in nature — like a cricket. Touching the cricket requires courage. Once in the mouth, the dried cricket breaks up with what must be an authentic bug taste, as an unknown bitter taste lingers.

While there are companies selling edible insects, it is not easy to find a restaurant or a cafe serving them. Papillion’s Kitchen, located in central Seoul, was greatly popular a few years ago, serving pastas and sandwiches containing insects. But the restaurant is closed now.

Edible Coffee also used to serve main dishes, but has since stopped due to cost issues.

The cafe now serves as a venue for the firm to receive feedback from customers, rather than solely as a profit-making business.