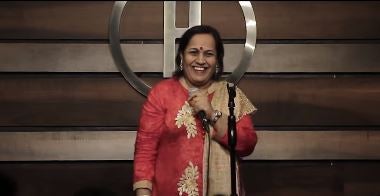 There is much delight in having the power to speak one’s mind and much satisfaction still in the ability to laugh at one’s self. One woman from India uses the force of stand-up comedy to stand against social inequality — a reality she’s no stranger to as a domestic worker.

Deepika Mhatre, a 43-year-old woman, is a maid by day and a stand-up comedian by night. According to The Guardian on Aug. 7, Mhatre’s day starts at 4 a.m., traveling to commuter trains where she sells imitation jewelry to the riding public making their way to downtown Mumbai.

At 7 a.m., she arrives at the first of five houses where she works as a cook. But come nightfall, Mhatre temporarily exchanges her kitchen utensils for a microphone and takes the stage where her audience awaits.

“Although my employers were mostly nice to me, I used to hear horror stories from other maids,” Mhatre was quoted as saying. “I used my experiences for my routine, like other comedians.”

In one of her monologues, Mhatre spoke about how maids were made to sit on the floor, stand in a corner or use a separate chair. They, too, have to use separate utensils.

“That’s fine. Go and hide your precious utensils that I am not allowed to use,” said Mhatre. “But whose hands made the chapattis you eat? And whose hands apply the balm when a tired madam [lady of the house] needs a massage?”

Her sets may be gleaned as a calling out to India’s elite, and the inability of the rich to see poor people as equals.”Why do they do this? It’s because they have no heart, no feeling for poor people.”

But whatever Mhatre’s awareness of her circumstances and outspokenness may result to, it appears that she will continue on speaking her truth regardless: “No madam can scare me.”

“My struggles in life have made me strong. Appearing on stage has added to my confidence now, so no, I don’t fear any repercussions,” Mhatre shared. “In fact, some madams who bumped into me near the lifts spoke politely to me for the first time.”

“Before, I had been invisible.” Cody Cepeda/NVG

Pinoy Stand-Up Comedy Revolution: A Show for the Fans