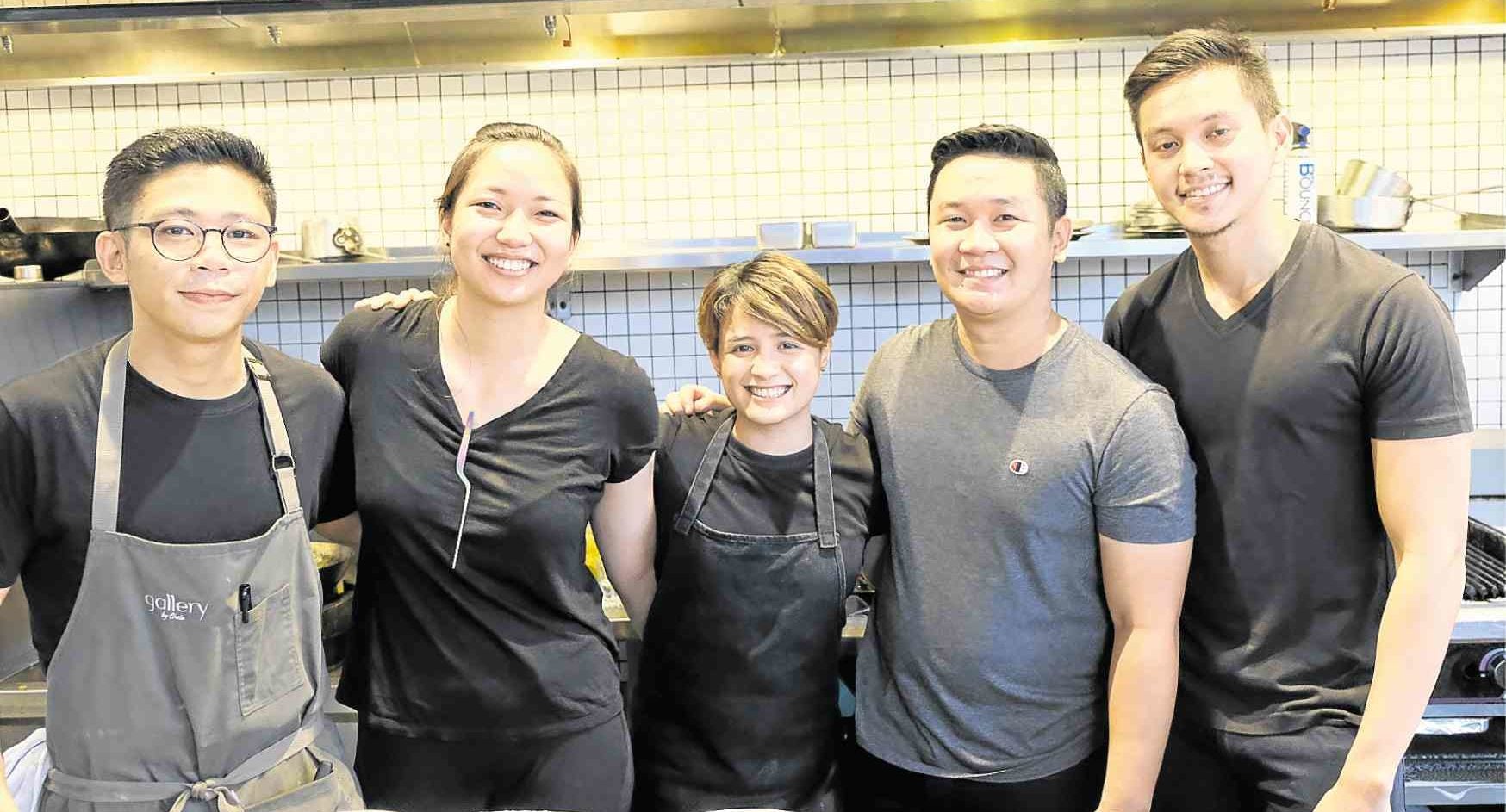 There’s a new crop of chefs creating much-needed excitement on the scene. They proved their worth in the recent 10-hands dinners at Hey Handsome restaurant, BGC, Taguig.

Held over two nights, the well-attended event had five twentysomethings producing a 10-course menu that showcased their styles. What they came up with was a progressive meal that wasn’t only inspired and inspiring, but also impressive.

“Each and every dish was composed with such synergy,” said Josh Boutwood, who attended on the first night, in support of his sous chef Mikee Lopez.

The repertoire began with a light and bright tropical appetizer—smoked mackerel with papaya-coconut vinegar puree and dried seaweed powder.

It was followed by a perfectly poached Backyard Farms’ chicken breast that came with a potent green onion sauce and black garlic paste.

A surprise midmeal was a cured and grilled ox heart, cut to bite-size chunks, then served with crab fat, malunggay oil, okra seeds and saba banana.

Rounding off the savory fare was a whole pig, roasted in the style of the Indonesian babi guling, served with sambal keluac and a salad inspired by a kerabu, a type of nasi ulam.

Two desserts and a petit four capped the meal. The first was a palate cleanser with dalandan granita as a major component. It was complemented by a pomelo vodka marmalade, Campari blood orange gel, buttermilk panna cotta, basil gel and an olive tuile.

Ending the meal on a high note was a gold-dusted dark chocolate truffle infused with rose petals.

Though the food was stellar, the stars of both nights were the five young chefs, who not only introduced themselves in a delicious manner and proved their worth and promise, but also learned from each other in the process.

“I think all of us grew in the kitchen,” said Lopez, the youngest in the group. “We learned different techniques and flavors from one another. And also formed a stronger bond after the dinner and that’s not something that comes often. It was such a great opportunity, experience and memory working with everyone involved in the event.”

With these five chefs in the wings, the future of the Philippine food industry is definitely looking bright and delectable.

A graduate of De La Salle-College of Saint Benilde, Villaflor first fell in love with food in sixth grade, during Home Economics class.

“At first, I was like, let’s do this just to pass the subject. But when we got deeper and really started cooking, I felt energized and ecstatic,” he said.

He has trained in some of the best restaurants in Spain and, for six years now, continues to be busy in the kitchen of Gallery by Chele, where he has become a business partner.

Lopez wasn’t a big fan of household chores, but cooking was something else.

“I helped my mom prep, then I would watch her cook. One time, she let me do everything. She just instructed me on how to do it. My family enjoyed the food a lot. That’s how I got hooked,” he said.

A graduate of International School of Culinary Arts and Hotel Management, Lopez has been working as wing-man of Boutwood for over a year now.

Lopez’s cooking tip: “Microgreens can be your best friend. They create a sense of flair to the plate and add flavor at the same time.”

“I was 15 when my mom taught me how to cook adobo. My version wasn’t that good,” Mendez said.

“But I remember how I felt after perfecting it, and after making other successful dishes, too. It was like earning a Boy Scout merit every time my mom approved of my food. That made me want to cook more.”

After graduation from Global Culinary and Hospitality Academy, he worked in casual and fine-dining restaurants. He works part-time for Margarita Forés as R&D chef.

Born to a family of home cooks, Vilar was led to professional cooking by accident.

“I actually didn’t know what curriculum to take on my fourth year of high school,” she said. “But all my friends were in culinary class so I decided to join them. And then, without me knowing, I fell in love with the ingredients and getting my hands dirty whenever I cooked. I love the heat in the kitchen and the process of making food flavorful and beautiful.”

She graduated from De La Salle-College of Saint Benilde and has been under the tutelage of Nicco Santos of Your Local and Hey Handsome since late 2014.

A former club DJ, Go owns and manages Manila Creamery, a three-year-old gelato company, which is quite ironic since he does not like eating dessert.

“I enjoy making them and use cooking as an avenue to express myself because, like music, there are no limits with food and the combinations are endless,” he said.

To start the business, he studied at Carpigiani Gelato University in Italy, then took a pastry course at Enderun College to refine his craft for confectioneries.

Go’s cooking tip: “I’ve always fallen into the trap of overcomplicating recipes and spending more time on a dish than I’m supposed to. Keep things simple and try mastering basic flavors first before going the next step.” —CONTRIBUTED