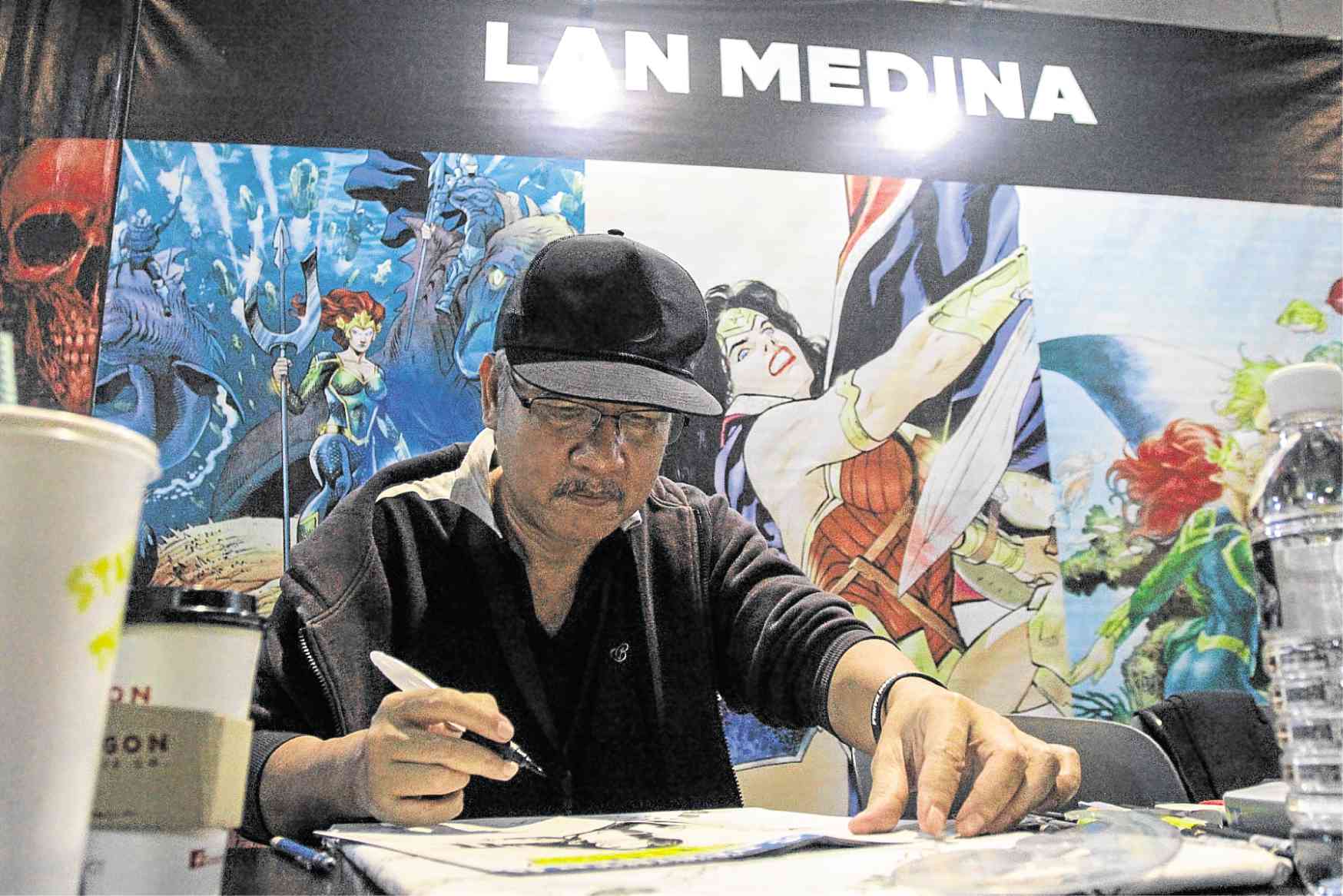 The visual world of Lan Medina 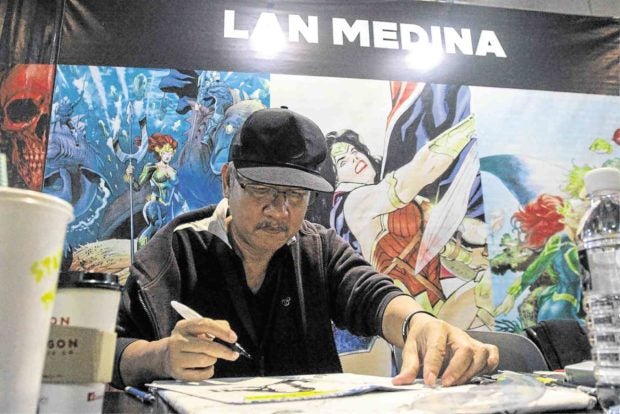 In a late Sunday morning panel at AsiaPOP Comicon (APCC), Lan Medina trooped quietly to a couch on stage. Wearing an unassuming hoodie, he was clutching a bottle of water while he answered questions during the panel. He was surrounded by comic book industry mainstays like Whilce Portacio, Phil Noto and ArtGerm, among others.

Seated attentively in the audience was his daughter, Ara, eagerly taking photos of Lan for his Facebook fan page. Before activities came to a close, Ara wrapped up a Facebook Live of Lan taking point during the panel. “Just nurture your passion for art. Don’t hesitate to ask and approach comic book industry veterans for advice,” he told the audience in Filipino.

To understand Lan Medina, the award-winning comic book artist, we’d need to take a peek at his works of art.

Medina made his mark on pencilling. He won an Eisner award for his work on Vertigo’s “Fables.” For the uninitiated, an Eisner Award is the American comic book industry’s version of an Oscars Award. This comic book series, about fairytale characters living among us, would later achieve critical and commercial success.

You might have seen his name splattered in comic book titles like “Aria,” “Punisher MAX,” “District X,” “X-Men Gold,” “Cable” and “Deadpool,” Castle, Iron Man and Deathlok. His latest work is for DC Comics, a limited series about Mera, Aquaman’s wife. Despite clocking in four decades in the American comic book industry, Lan avoids comic book conventions or big-name events in the local comic book scene. He’s only been featured by a local TV show once in the last decade. Maybe it’s the artist in him that shies away from the bright lights.

What you need to know about him is that he’s shy. Or so his daughter says. But he loves his fans. His busy APCC booth would attest to that. Despite receiving numerous invites to attend numerous conventions around the world, especially the famous San Diego Comicon, he hasn’t set foot in big comic book conventions. This year is the exception though; he made an appearance at the comic book panel and signed commissioned work for his local fans. “You don’t expect APCC to be this big, like the ones they stage in the United States,” he noted.

During the interview, Lan would be stopped by his fans who either ask for pictures or signatures. A fan approached his table and asked for a signature. Lan was smiling ear to ear. “‘Punisher MAX’ was my first major comic book purchase,” the eager fan told us. Lan seemed to be relishing the moment. His run on “Punisher MAX” is a reflection of his quiet demeanor. His rendition of Marvel’s trigger-happy vigilante was raw, even edgy at times. “I love drawing the dark and the gritty,” he said.

Lan credits his early learnings from artists who share Nestor as their first names—Malgapo, Redondo, and Infante. These artists made their mark during the Philippines’ golden age of komiks. Before the local komiks industry went into decline, he started his long relationship with the American comic book scene.

He struck up a professional relationship with Portacio, Fil-Am comic book artist and one of the founders of Image Comics. “Whilce took me on as an pencil assistant. from the beginning,” said Lan. “I would pencil his drawings and clean it up afterwards to send it for inking.”

Pencillers play vital roles within a comic book studio’s ecosystem; coordination is key between the writer and the penciller. They’re responsible for putting a writer’s ideas into the visual form. Medina has inhabited that role quite comfortably over the years.

Back in the day, he was heavily dependent on FedEx to send his finished products. Now, he has scanners and the internet to make him a more efficient artist. He still spends about three to four days pencilling covers and pages but technology has come a long way since the ‘90s.

On staying in PH

Here’s the deal about Medina and his early forays with the comic book industry. You’d think he would leave the Philippines for greener pastures. But he stayed, he opted to start a family in the Philippines.

A man of few words, Lan believed it to be an easy decision. “Anything I’ll earn there would be double here, right?” he said. Medina has four kids, all of whom raised in the money earned pencilling for major comic book companies or commissioned work.

While some would have frowned at his decision to stay put in the Philippines, language played a critical role in his career choices. “You know that feeling. I’m not comfortable speaking English,” said Medina. “I had doubts about where my career would go if I went abroad.”

Contrary to cultural norms in the Philippines, a lack of articulation in the English language should not be a measure of an individual’s intelligence or educational attainment. Disheartening to hear but Lan has already carved a corner in comic books. His growing local fanbase is a testament to that; his Facebook page is filled with fans keeping tabs on his latest works. At APCC, attendees would ask him what his latest work is or where his next project will come out.

At the end of the day, Lan is ever the consummate worker. He was busy finishing a sketch that a fan commissioned earlier and I asked whether he’d uproot himself if given another chance. “Maybe I’ll do it just to see the world,” he said.

To understand Lan Medina, one has to speak the language of comic books.