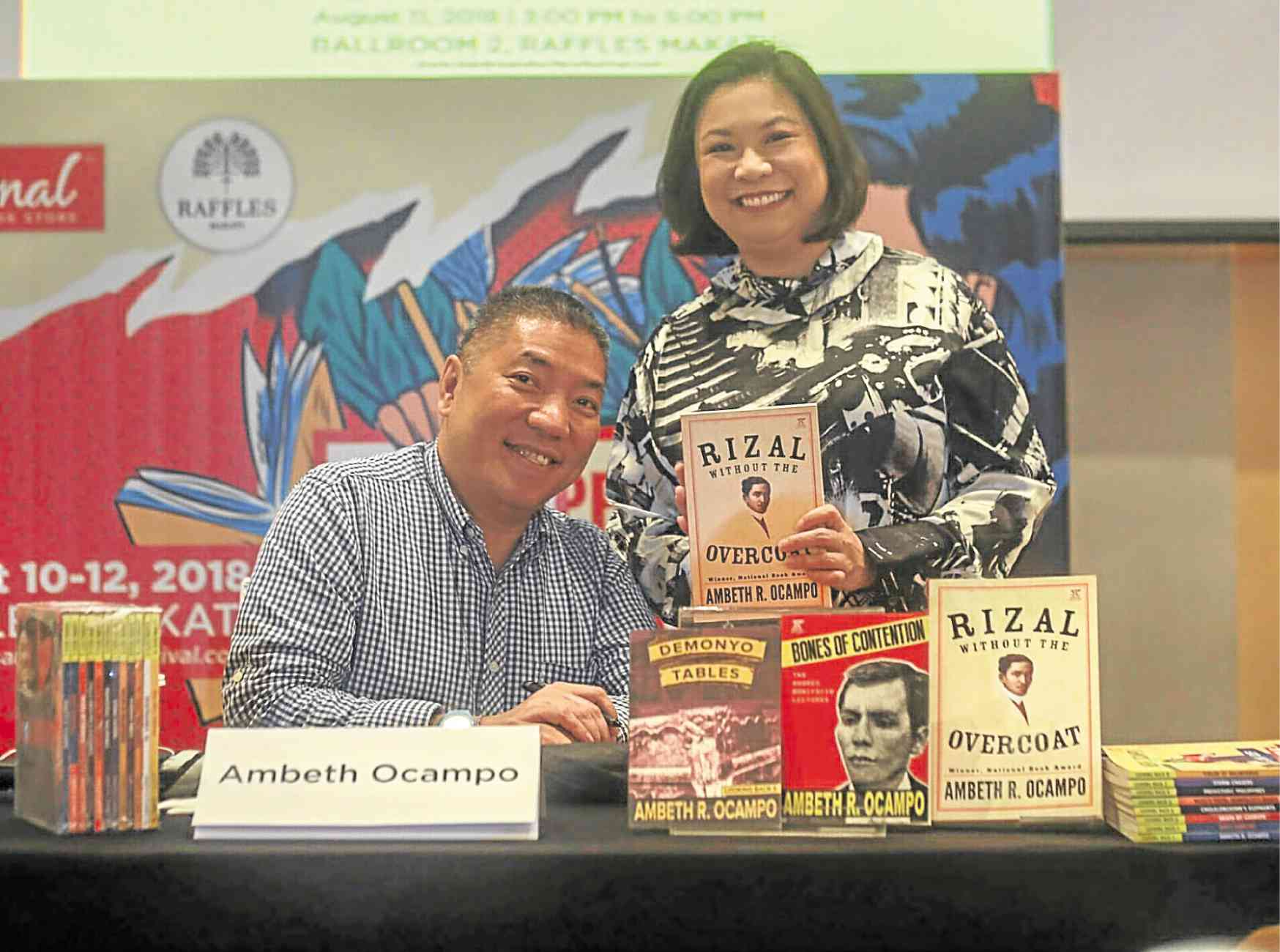 Xandra Ramos-Padilla (right) has her book signed by historian Ambeth Ocampo at the Philippine Readers and Writers Festival at Raffles Makati. —RICHARD REYES

NBS had been bringing in writers and housing them at Raffles Makati. The biggest event was when “Tuesdays With Morrie” writer Mitch Albom was met by thousands of Filipino fans.

So Ramos-Padilla asked herself, “Why not have the writers come together?”

Today, the festival is called the Philippine Readers and Writers Festival (PRWF) to reflect an emphasis on both readers and writers.

The work of inviting the writers and arranging the panels happens over a year before the event itself, with NBS working through the foreign publishers as well as the local presses.

“You’ll have to reinvent the festival every year,” Ramos-Padilla explained. “I’m amazed at the range of topics that really speak about what people are talking about and concerned about today. We invite our publisher partners who supply the books to run the panels, select the content and put together their authors. Every year has been amazing.”

There are writers Ramos-Padilla would love to invite, such as Dan Brown, Gillian Flynn, Paula Hawkins and Jodi Picoult. The goal, she said, is to expand the festival’s audience: “I want to have the literary crowd but also bring in everyday readers, to bring in other conversations and to be more digital.”

She wants an app that would pair attendees with the panels they want as well as the rooms they are to sit in. “I want to do something for the publishing industry, like talks about the business of publishing,” she said. She was thinking about a gathering where people can talk about “best practices and the business of selling.”

Ramos-Padilla, granddaughter of NBS founder Socorro “Nanay Coring” Ramos, is also expanding the NBS legacy with their signature yearly festival. She said NBS is going even further, however, with a young adult-oriented festival already happening this November.

The continuing success of the PRWF is a good indicator of just how much Filipinos love to read.

“Reading is still alive and well. It’s still robust,” she said. “People are writing and that feeds the reading.”

She also stressed how the PRWF has grown from featuring only literature to a very wide range of topics, including LGBTQ, spoken word and business literacy. It’s something that Ramos-Padilla said the PRWF will continue to push.

“These are all the things that are inside people’s conversations,” she said. “We just have to always keep relevant.”

Ultimately, the PRWF’s growing audience is a welcome reward for the hard work Ramos-Padilla has done for the festival. “We should always ask ourselves, should we be doing this? And I’m glad the answer is always ‘yes.’”