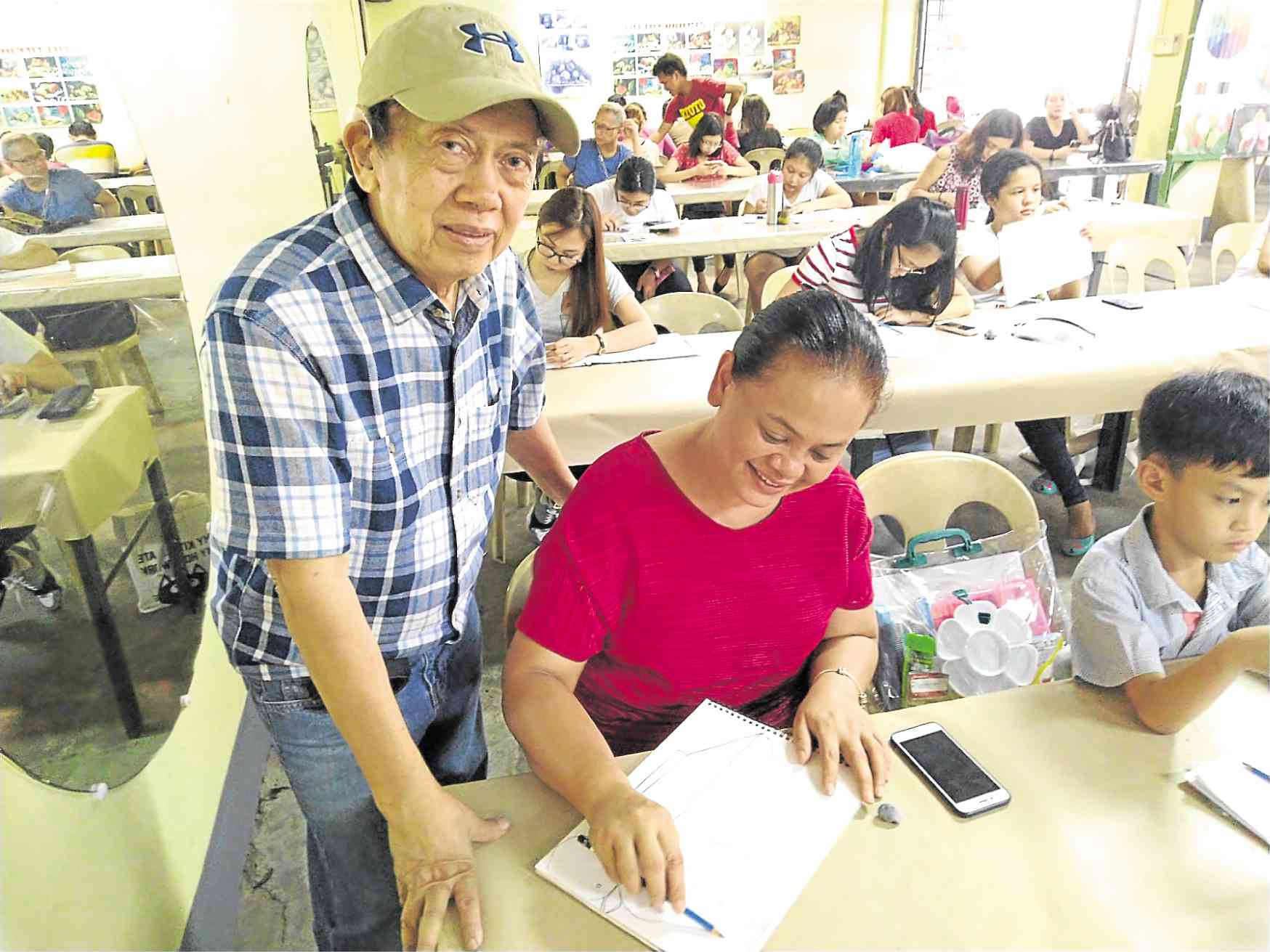 Sena, with his students, is holding an exhibit at Pinto Art Gallery in Antipolo.

George Bernard Shaw’s sour observation—that those who can, do and those who can’t, teach—doesn’t really hold water in the case of Fernando Sena.

The 70-year-old painter has been teaching art nearly as long as he has been making it, and with equal fervor.

Since 1975, Sena has been conducting art workshops, first with the Children’s Museum and Library Inc. (CMLI), then with the Jorge B. Vargas Museum at University of the Philippines Diliman, and now also in his own Buenas Artes Fernando B. Sena Art Facility in Tandang Sora, Quezon City.

He might have carved out a bigger niche for himself in the art world had he foregone the teaching and devoted himself fully to his painting. He was well on his way as a figurative painter, absorbing cubist, expressionist and other influences in a continuously evolving style.

But then we might not have the likes of Elmer Borlongan and many other prominent artists Sena helped set on their paths over the past 40-plus years through his art workshops.

Borlongan, one of the stars of today’s contemporary art scene, got his start in one of Sena’s CMLI workshops when he was still in grade school—a fact that he has always acknowledged.

Later, he invited Sena to hold a workshop in Antipolo for what would eventually become the Saling Pusa group, which includes such prominent names as Mark Justiniani, Ferdie Montemayor and Antonio Leaño. It was at the City Gallery in Manila, again through Sena, who was curator at the time, where Saling Pusa held its first exhibit.

And it was Sena’s wife, the late Nancy Canauay, who would write in a newspaper article that the group would make waves on the local art scene.

Teaching has become such an integral part of him that he can no longer do without it, says Sena. Even only one day of not giving a lesson to an aspiring pupil makes him feel the weight of his years.

“I feel stronger when I’m teaching,” he says in Tagalog. “My students inspire me. When I see them getting better, I feel like I have to paint.

“I have two functions in life as an artist,” he continues. “One is the personal function: I need to paint and exhibit so I can earn and support my family. Second is the social function: I have to share my time and what I know so that others can benefit.”

This need to give back is deeply rooted in Sena’s upbringing.

Growing up in the gritty Masangkay neighborhood in Tondo, Manila, the young Sena took refuge in three things: art, comedy, and the church.

The first of these he encountered in the Tagalog komiks he sold on the streets to supplement the household income; the second in Dolphy and Panchito’s onstage gag routines; and the last in the notion that he might become a priest.

Art won out in the end. He would copy illustrations from the unsold copies of Espesyal, Aliwan and Tagalog Klasiks before returning them. His grade school teachers, noting his aptitude for drawing, made him do portraits of national heroes and great men which were tacked up on the class bulletin board.

Still trying to find his way after finishing his course, Sena discovered the annual CMLI art workshop, a free workshop for out-of-school youth. Among the teachers were prominent artists such as Glen Bautista and Agnes Ong.

Sena’s workshop paintings caught the eye of Pablo Victoria, dean of the University of the East (UE) School of Fine Arts, who saw his talent and recommended him for a CMLI-funded scholarship, thus fulfilling his dream of becoming a full-fledged artist.

Sena graduated with a fine arts degree from UE in 1972. But even as he embarked on his painting career, Sena felt he owed CMLI a debt of gratitude.

“I have to share what I had learned, I have to repay them in another way, so I volunteered to teach art to children in Sapang Palay, Carmona, Antipolo and Nueva Ecija.”

Actually, even before he finished his studies, Sena was holding art workshops for poor children in his parish church, fully convinced of the power of art to lift people, if not out of poverty, then at least into the realm of creativity. He saw himself in these children, filled with a desire to learn, but deprived of the means.

He’s never really stopped teaching since then. His life revolves around the twin poles of painting and teaching.

Over the years he has developed his own views on art education.

“A teacher has to have a passion for teaching, because how can the pupil be interested in learning if the teacher isn’t interested in teaching?” he says.

Students also pick up on what a teacher does, as well as what he says, says Sena. A lazy teacher breeds lazy students, which is why on workshop days, he arrives two hours early to set up his teaching aids, so that when pupils arrive, they can get to work immediately.

“A teacher is like a housekeeper,” says Sena. “He sets the table so when the master arrives, he can start eating. It won’t do if he starts cooking only when the master is already seated at the table.”

He notes that a teacher should remember that at best only 10 percent of the outcome of a workshop comes from him, 90 percent comes from the pupils themselves. It is the teacher’s job to help them fulfill their god-given talents.

In 1991, Sena started teaching painting part-time at the UP College of Fine Arts. His students included such now-established artists as John Santos, Norman Dreo and Alvin Montano.

He had to leave after a few years because of family circumstances. Since then he has taught mainly in all-ages art workshops. The biggest draw is the summer art workshop at the Vargas Museum, which attracts up to 90 students every year.

Sena is also much in demand for private art workshops for corporations, enthusiastic amateurs (including such notables as Ombudsman Conchita Carpio-Morales, Lilia de Lima and Deedee Siytangco), and special groups needing art therapy such as prisoners, cancer survivors, heart patients, disaster victims and the like.

A few years ago, a group of mothers who had taken Sena’s art workshop at UP got together to establish the Buenas Artes Fernando Sena Art Facility, a gallery and workshop space in Quezon City.

“Our purpose is to help artists who may not be well-known to exhibit their works,” says Sena. “In the Philippines, known artists represent only the tip of the iceberg. The great majority is under the surface.”

Apart from his own workshops, Sena also supports the Art Discovery and Learning Foundation Inc., a scholarship program for gifted students who otherwise lack the means to study art. With the help of generous patrons, the foundation has sent 11 students to art school as of this writing.

“An artist must have discipline,” says Sena. “Now that I’m known as a teacher, I feel I have to prove to other artists that I haven’t forgotten my painting.”

Fernando B. Sena has an ongoing exhibit at the Pinto Art Museum in Antipolo City.