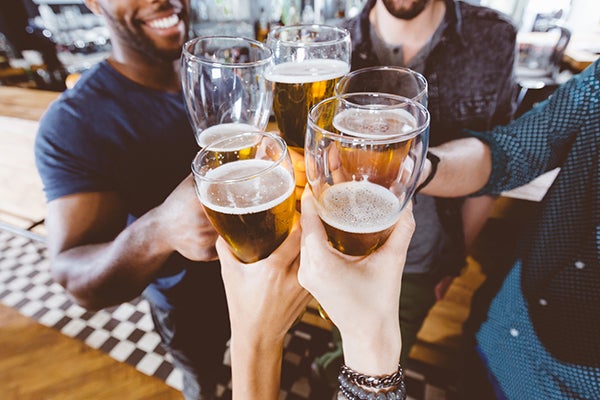 New United States research warns young adults to be careful with their alcohol consumption, finding that binge drinkers develop cardiovascular risk factors such as higher blood pressure and cholesterol at a younger age than non-binge drinkers.

The study by researchers at Vanderbilt University School of Nursing set out to investigate the effects of binge drinking on blood pressure (BP), cholesterol, and blood sugar in individuals between 18 and 45 years of age.

They analyzed data from 4,710 young adults who took part in the U.S. National Health and Nutrition Examination Survey (NHANES).

Although binge drinking rates are highest in this age group, little is known about the effect of regular binge drinking on these cardiovascular risk factors, and if there are any differences in these associations between men and women.

Compared with non-binge drinkers, young male binge drinkers had higher systolic blood pressure, the force on blood vessels when the heart beats, and higher total cholesterol, both factors that contribute to cardiovascular disease.

There were no effects of binge drinking on systolic blood pressure or total cholesterol in women, but binge drinking by young women was associated with higher blood sugar levels when compared to those of non-binge drinkers.

Study co-author Mariann Piano commented that young adults need to be aware of the long-term consequences of binge drinking, adding, “the risk extends beyond poor school performance and increased risk for accidental injury.”

Taking into account the new findings, as well as recent studies which suggest that development of high blood pressure before age 45 is associated with significantly higher risks of cardiovascular death later in life, the researchers said that healthcare practitioners should consider the importance of reducing alcohol intake as an important cardiovascular risk reduction strategy.

The results are also concerning as, according to Piano, binge drinking rates are at an all-time high. Compared to previous generations, the rate and intensity of binge drinking may place today’s young adults at greater risk for alcohol-related harm.

The results were published in the Journal of the American Heart Association. JB

Could good posture help you perform better at math?