Japanese family travels all the way to Brunei by bicycle | Lifestyle.INQ ❮ ❯ 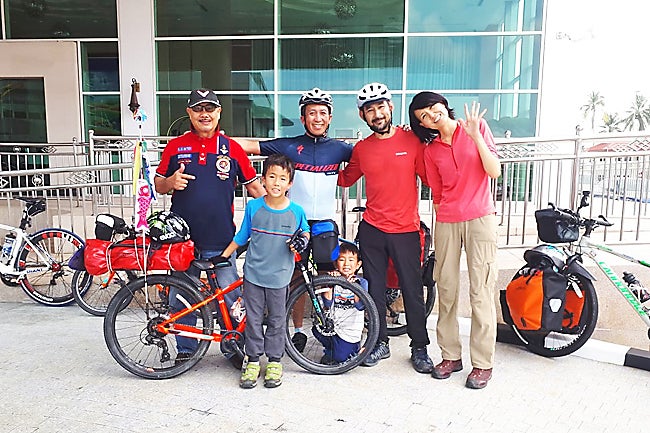 Japanese family travels all the way to Brunei by bicycle

KUALA BELAIT, Brunei — A journey around the world on bicycle can be daunting, but that did not stop the Sakamoto family from taking up the challenge.

Their journey, part of a personal project titled ‘The Sakamotos Great Six-Continents Adventure’, brought has them to Brunei Darussalam.

Starting the journey in Nepal, the four-member family of Tatsu Sakamoto, his wife and two sons reached Brunei for the first time, crossing the border from Malaysia.

The Sunday Bulletin was fortunate to catch up with the family and talk to Tatsu Sakamoto who shared that from Nepal, they made their way to Bhutan, West Malaysia, and Singapore. “From Singapore, we flew to Kuching where we continued our journey to Brunei,” he said.

When asked why he and his family decided to tour across the world, he said he had taken part in similar journeys in his twenties, and he wanted to share the experience with his family. “Of course it is not easy to travel with kids, with many potential hazards out there in the world; but I believe that the experience gained will be most valuable for us.”

He shared that while he had visited Brunei some 20 years ago under the Ship for Southeast Asian and Japanese Youth Program (SSEAYP), it is the first time for his wife and two sons.

“The journey would be difficult, if not for the friendly and supportive people in the visiting country,” he noted, recalling one such resident, Jeffrey Chong, an avid cyclist and a travel enthusiast who supported the Sakamoto family during their journey in the Sultanate.

He said that many of the people that he met in Brunei, even thought it was for a short while, were very supportive. “It’s a unique opportunity for us to learn not only about the country but also the people and their culture.”

He also expressed his sincere gratitude to the Bruneian cyclist for supporting the family financially as well as in many other ways. He recalled that his family was treated to a morning meal and the residents in the Belait District offered to repair one of the bicycles.

When the Sunday Bulletin asked what advice he could give to those interested in conducting similar journeys around the world, Tatsu said that he could not have achieved the dream of traveling around the world without the support of his friends, families as well as residents of the countries that they visited. “While it is important to express your idea on what you want to do to others, to have the support of others and the will to do it are important. If you can dream it you can do it.”

The family is slated to continue the journey to the Brunei-Muara District in the coming days. They plan to travel by ferry to Labuan and to Kota Kinabalu where they will conclude this year’s journey.