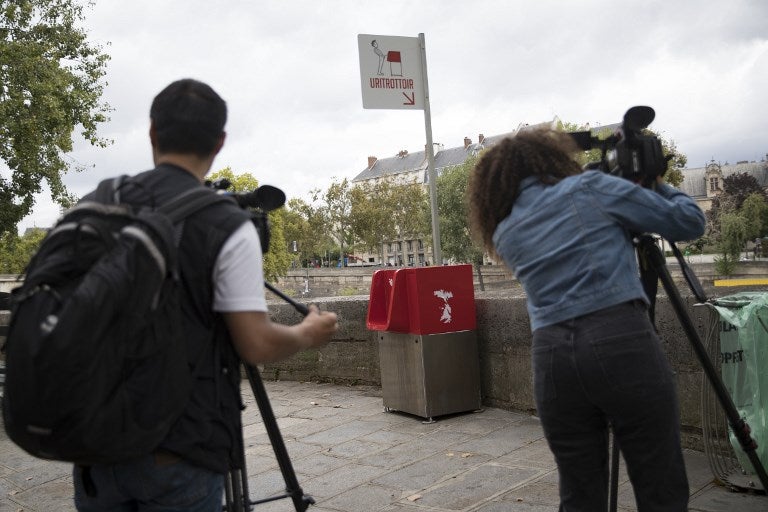 Members of the press film a "uritrottoir" public urinal on August 13, 2018, on the Saint-Louis island in Paris. The city of Paris has begun testing "uritrottoirs", dry public urinals intended to be ecological and odorless, but that make some residents cringe. / AFP PHOTO / Thomas SAMSON

PARIS, France – Paris’s penchant for urban urinals has taken a new ecological turn with trialing of a new dry and allegedly odorless version known as the “uritrottoir.”

But the red-topped receptacle appears to have mainly provoked ribbing and ridicule and, among some local residents, even rage.

“It’s a little weird… but if you need to go it’s better than to going on the street,” admits Jonathan, a tourist from New York who examined the rectangular facility with plants growing on top, which offers little or no privacy to those looking for roadside relief.

“It’s a little bit in the open, some people might be uncomfortable,” he said as several boats packed with tourists floated past along the Seine.

These dry, organic urinals do not use water but are filled with straw which can be easily composted, according to French design agency Faltazi.

Although three of the contraptions were installed elsewhere in Paris during the spring, their arrival on the exclusive Ile Sainte-Louis, not far from Notre Dame cathedral, has met with a more robust response.

Local resident Francoise said she was “outraged” by its presence, describing it as “really not very attractive.”

“I like it but putting it here is a bad idea,” said Gregory, a 43-year-old photographer who has been living on the island for the past three years.

City Hall said it had installed the facilities “at the request of residents” while noting the project was still in a trial phase.

The urinal must be accessible by vehicle in order to be emptied and to change the straw once every three weeks.

But the biggest criticism so far is that the uritrottoirs only cater to men.

“For reasons of privacy, women need to be in a cabin, so the aim is to free up existing toilets for them,” the company says. /cbb