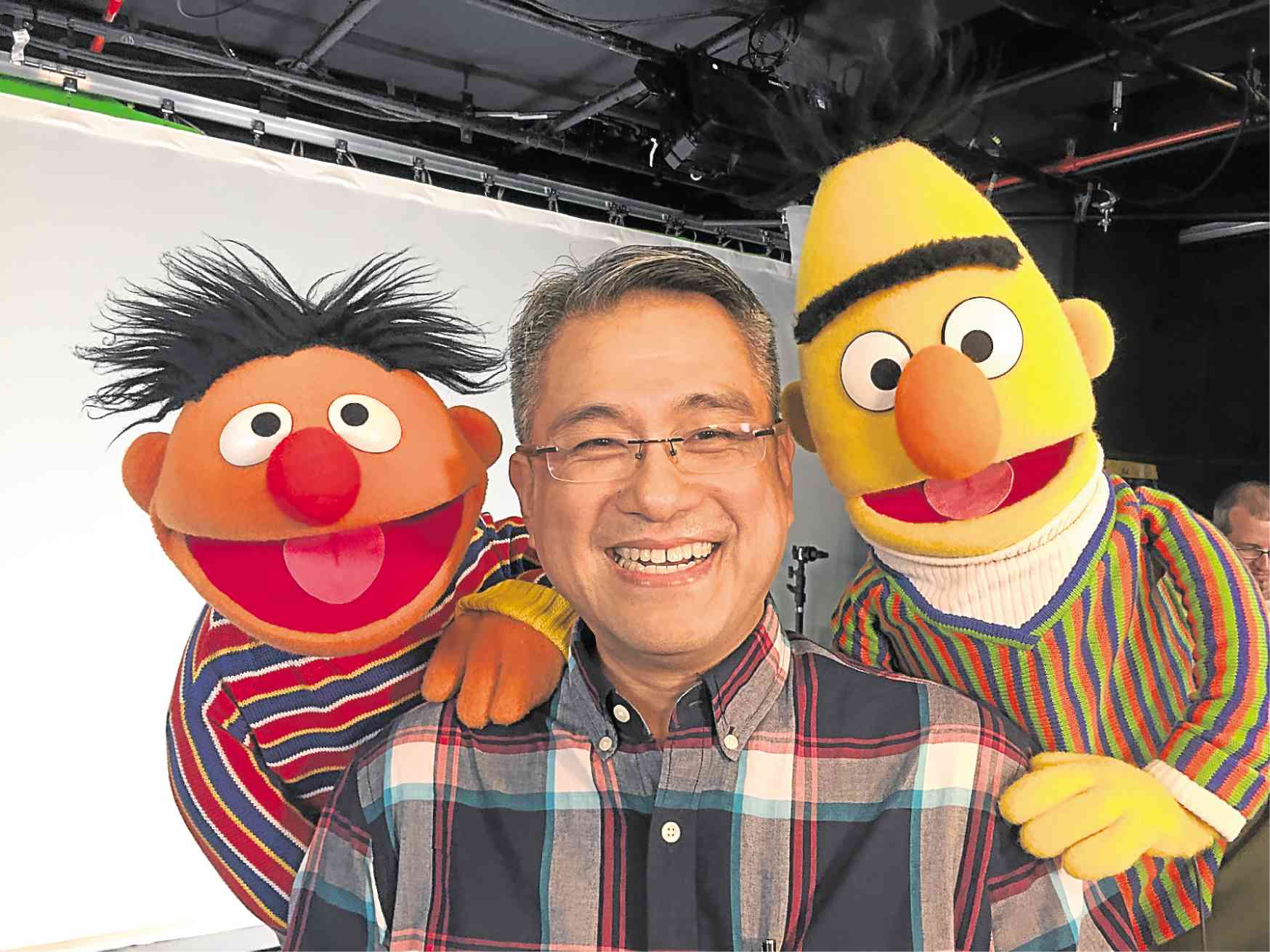 He’s been to New York several times to moderate major forums, from the Clinton Global Initiative to the United Nations sessions on global economy and climate change. He has also watched Broadway musicals like “Les Miserables” and “Phantom of the Opera.”

However, this latest visit to NY was like no other—because he got to meet his childhood icons from “Sesame Street.”
Family

“Meeting the muppets in their home was like seeing long-lost family, a reunion with characters you watch on TV and online,” Hizon said.

“Until today, the program has had an impact on my life and the lives of many of my friends—just look at my Facebook post, inundated with wonderful comments.”

To this day, he says, he hums the theme song: “Sunny day, sweepin’ the clouds away. On my way to where the air is sweet. Can you tell me how to get, how to get to Sesame Street?”

We ask him, via e-mail, about “Sesame Street” and his generation, and whether or not it still connects to today’s generation.

How was “Sesame Street” a part of your childhood? Can you recall the days you would watch it, and what you learned from it? Who was your favorite character?

I was watching “Sesame Street” since I was about five, so it was a big part of my childhood.

And today at 52, I’m still excited to watch episodes. I learned to sing with the muppets and humans, reciting the alphabet and counting numbers.

Some of life’s lessons I learned watching “Sesame Street” were respect for elders, patience, perseverance, togetherness, friendship, sharing, helping one another, and being positive and happy.

My favorite characters were Ernie and Bert, Cookie Monster, The Count and Big Bird, and in the later years, Elmo. I love the way they bantered with the human cast such as Gordon, Susan, Mr. Hooper the gruff grocer with a warm heart, Luis and Maria, and music teacher Bob.

Filipino kids were introduced to memorable characters like Kiko Matsing (the Pinoy “Oscar the Grouch”) and Pong Pagong (the Pinoy “Big Bird”), with Kuya Bodjie and Ate Sienna.

What was it like growing up with “Sesame Street,” with muppets, instead of the video games and iPads of today’s kids?

It was fun to watch talking muppets. It made me sing and dance and imitate their voices. I would always wait for the segments of Ernie and Bert, best friends with contrasting personalities, and their witty conversations on pigeons, paper clips and the rubber ducky.

I prefer watching my “Sesame Street” characters to video games. I can’t keep up with the online gaming world.

I brought my 13-year-old son, Migo, to the Sesame Street headquarters and studio in New York, and he had so much fun meeting the muppets and the men and women behind them. He doesn’t belong to the Sesame Street generation, but he was really excited about the behind-the-scenes action and the values that the show imparts to today’s kids.

Can you compare it to how it is in your son’s time?

I was really happy Migo appreciated what he saw and experienced, because video games are the exact opposite of what Sesame Street espouses.

He said, “Daddy, this is so different from the video games I play, such as Fortnite, Rainbow Six Seige and Counter Strike, which all focus on conflict and destruction. This show is all about happiness, sharing, respect and friendships.”

He was excited for photo ops with Ernie, Bert and the Count in the studio, and having fun with Cookie Monster and Elmo.

You think today’s kids are missing something by just
being hooked on video games instead of characters like Big Bird?

I believe they’re missing a lot. Kids today are entertained by video games that value points and promotion of violence and destruction. There should be a balance between positive values and video game entertainment.

How were you able to visit “Sesame Street”? What was that trip about?

It was a chain of events.

It all started last September when Elmo had an Asian tour and I had the opportunity to meet and interview the lovable red monster on my BBC News morning show, “Newsday.”

It was a fun interview. Elmo even sang his famous song and converted his name in the lyrics to “Rico.” I got goosebumps. It’s one interview I’ll never forget.

In my 30 years in broadcast journalism, I’ve spoken to almost all kinds of personalities, from politics to entertainment, business and sports. But this one was extra-special.

Then in June, I got the opportunity to interview another Sesame Street superstar: Cookie Monster. It was hilarious!

Both interviews went viral, and after weeks, I received a Facebook message from Lana Magno-Levine, the VP for Finance of Sesame Workshop, who loved the interviews and extended an invitation to visit its New York headquarters.

I never even knew that “Sesame Street” was based in NY. Lana is a Filipino-American who’s been with Sesame Workshop for more than 30 years.

That got the ball rolling, and the rest is history. I visited NY at the end of July with my wife Melannie, our son Migo and niece Carrot.

So what was it like meeting your favorite characters? You looked happy, to put it mildly.

I was not only happy, I was ecstatic. Haha! I got goosebumps and a bit nervous meeting my childhood heroes. It was a dream come true.

Migo and I were fortunate to see them on their last day of filming for the new season. It was such a privilege. Meeting Elmo and Cookie Monster and their muppeteers in Asia was really exciting, but being in their home, where it all happens, was something else.

How is Sesame Street doing?

Sesame Street is celebrating its 50th year in 2019 and is still distributed in various networks in Asia and around the world.
They, too, have their digital platforms from SesameStreet. org, PBSKids.org, Netflix, Amazon, iTunes and some 50 apps. A Sesame Street YouTube channel has millions of subscribers and billions of views.

What do you think is Sesame Street’s value to today’s kids, who have a surfeit of technology?

There is so much children’s content on TV and on the internet, but I believe Sesame Street remains relevant because education trumps entertainment.
On Sesame Street, children are engaged as partners in learning—they are asked to repeat, respond, and to think about what is occurring on the screen.
The show also honors children’s lives and engages them in discussions about things that matter to them, including diversity and difference. Children see people like them living and learning on Sesame Street.

And over the years, Sesame Street has not shied away from difficult and timely topics such as death, homelessness and discrimination.
What I also learned during my visit was that Sesame Street, before any scripts are written, child development experts offer input on what today’s kids need to succeed in school.

That’s why in addition to teaching letters, numbers and values, the show now teaches behaviors such as impulse control and listening to directions. I also appreciate the emphasis on multiculturalism and the pop culture references. This is the magic and relevance of Sesame Street.