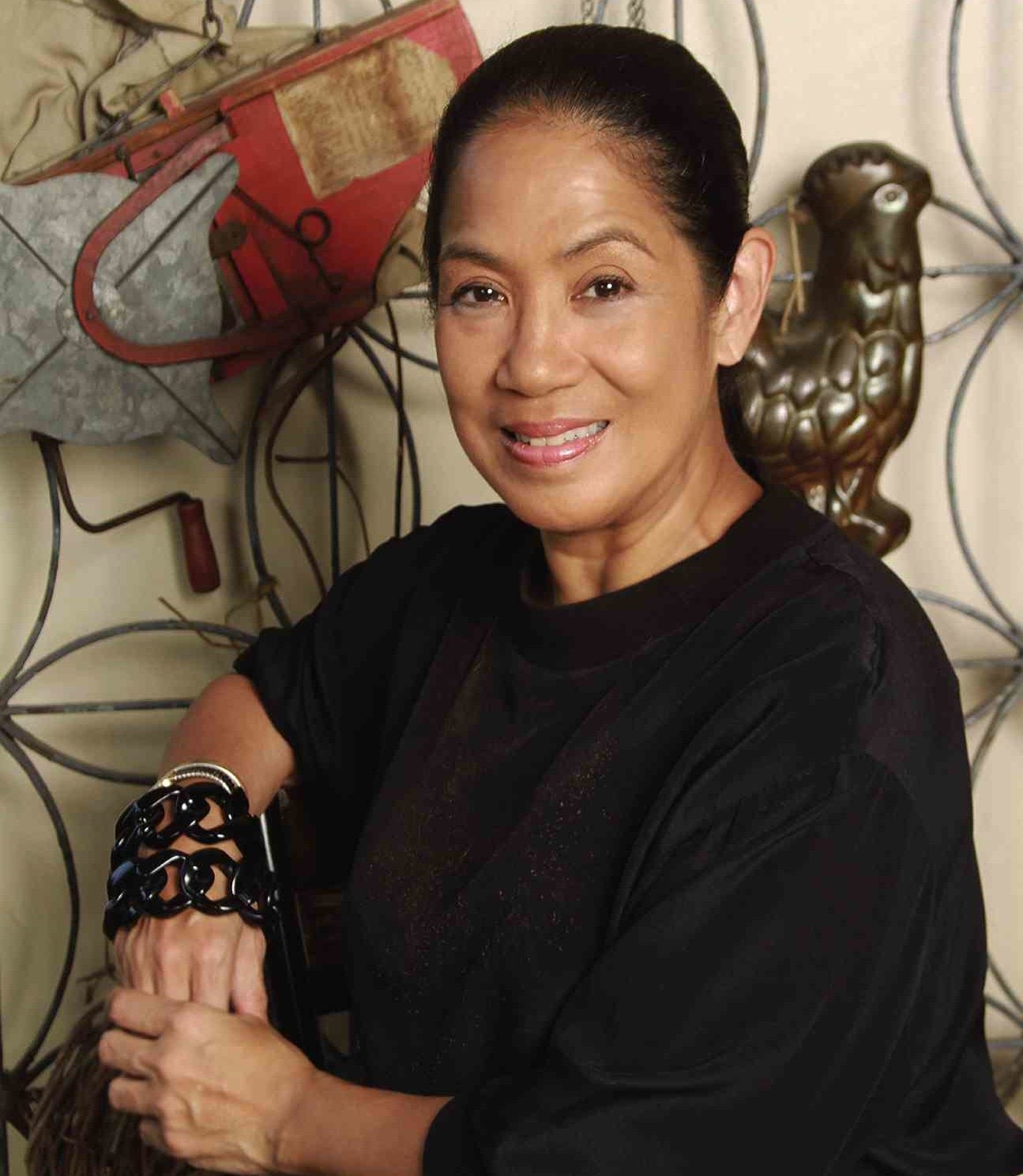 Margarita Araneta Forés marks her 31st year in the culinary industry, and what a career it’s been. She has evolved from a socialite/culinary dilettante to one of Asia’s most influential chefs.

Most important, she helped put Italian cuisine in the mainstream of Philippine dining. She made Italian cuisine more accessible to the Filipino diner through her restaurant chain, Cibo.

She has likewise promoted Filipino cuisine as resource person of leading institutions abroad, making it more appetizing to the world through international gastronomy exhibitions.

Moreover, she has been championing Filipino farmers, producers and suppliers of artisanal products.

She was also one of the movers behind Madrid Fusion Manila, a watershed annual event in recent years which put Filipino cuisine on the culinary world stage, when the world’s top chefs flew to Manila for interaction with our own chefs and food suppliers. Madrid Fusion has become a gathering that gourmets, gourmands, foodies, the media and culinary students looked forward to for learnings and sharing ideas.

It all began in the early 1980s. Working at a fashion house in New York, Forés would entertain friends in the Araneta vacation home in Pawling, a scenic and affluent town in Duchess County.

She’d pick flowers from the cornfields, decorate the house and make pastas and dessert for visiting friends.

(Last year, the house and the grain silo became the location of the thriller film “A Quiet Place.”)

In 1986, Forés heeded her instinct and took cooking lessons with Masha Innocenti in Florence, Italy, and other mentors.

On April 4, 1987, she presented her dishes—her culinary debut—in what was then Hyatt Regency, one of the top five-star hotels in Manila, upon the invitation of its general manager Perfecto Quicho.

Food columnist Doreen Fernandez was delighted by the novelty of Forés’ Italian dishes.

The palate tickler was Fiori de Zucca Ripieni e Olive Imbottite, one of Forés’ first appetizers, made of squash flower fritters coated with mozzarella and anchovy and stuffed olives.

Although the local squash blossoms were smaller and less brighter than the Italian, Forés made such an elaborate presentation that Fernandez described it as a “mini still life.”

The food columnist noted that the parmegiano gave the salad a sharp touch. Forés recalled the first time she sampled the dish in Florence—she had never tasted anything like it.

“It was a new way of enjoying salad, the Italian way—different from what Filipinos were used to,” recalled Forés.

“Back then, salads were iceberg lettuce with tomato and heavy dressings that had mayonnaise, or were whipped up with mustard. In the purest sense, food is all about the ingredients. Less is more.”

Forés has been scouting for farm sources of quality local produce, such as tomatoes that approximate the sweetness of those in the Mediterranean.

When Forés encountered the seafood ravioli with lemon sauce in Venice, she imagined she could make the sauce from calamansi.

“We fill the ravioli with crabs from Negros and plate it with taba ng talangka (crab fat),” she said.

The seafood ravioli has defined Forés’ philosophy of showcasing the best of local ingredients without diluting the integrity of Italian cuisine.

The meat course, Manzo Arroso Alla Marghi, roast tenderloin in a sauce of rosemary, capers and anchovies, became the cornerstone recipe in Forés’ repertoire. It included a side dish of lettuce and arugula, still unknown to most Filipino palates.

She learned the recipe from her first teacher in Italian cooking, signora Innocenti.

The dessert was light—Frutta Fresca con Spuma di Cioccolato Bianco, a medley of strawberries, watermelon, pineapple wedges and cantaloupes with white chocolate mousse. It was a nod to an Italian dessert of white mousse and assorted fruits. Here, she wanted to highlight homegrown fruits.

Forés initially worked in her uncle’s Trattoria Uno in Cubao, Quezon City, and did catering for 10 years until she launched her restaurant chain, Cibo, in 1997.

Cibo’s bestseller, the spinach dip, was a tweak of the artichoke dip. The famous penne al telefono was based on an Italian chef’s accidental recipe of pasta with melted mozzarella, fresh tomato sauce and basil.

When paninos or sandwich places were cropping up in Milan, she incorporated a panini menu in Cibo.

She opened Grace Park in 2013 to highlight local ingredients. For her, the Italian food value of clean food and fresh, homegrown products, is relevant in today’s industrialized world where processed food has become the norm.

“The best lesson I learned in Italy was respect for ingredients and being true to the cuisine,” said Forés.

“Italian cooking is all about a home-style approach, few ingredients in a dish. When you work with a tomato, it should still look like a tomato after it’s been cooked.”

Forés felt the need to research on Filipino cuisine.

“It wasn’t just about replacing Italian ingredients but discovering the beauty of the Filipino ingredients,” she said.

When she tasted the palm heart salad with raw mushrooms, celery and parmesan at Trattoria Garga in Florence, she discovered that the main ingredient was a canned palm from Puerto Rico. She then decided to recast the Italian dish using ubod (heart of palm), given the abundance of palm trees in the Philippines.

Another pioneer dish tweaked was Italian pasta with fried egg and shaved white truffle. Her version was the pappardelle, wide flat noodles with mild, onion cream sauce, crowned with yolk of the itlog na maalat (salted red egg), asparagus and a drizzle of truffle oil.

The uniqueness of the dish has been lauded by Italian chefs and an American celebrity chef. This is a bestseller at Grace Park.

She approaches Filipino dishes with respect as she introduces Italian elements. The lamb adobo is prepared the traditional way, with a difference—the flavor is enhanced with the juice from the meat and balsamic vinegar. Italian vinegar from grapes is a balance to the local vinegar.

“This enhances the gaminess of the lamb,” said Forés.

She augments the famous Ilonggo KBL or kadyos, baboy, langka (pigeon peas, pork and jackfruit) with a few slices of cotechino, soft Italian sausage, and its drippings on the kadyos for depth of flavor.

“It’s still an Ilonggo dish but enhanced with an Italian ingredient that is connected to the ingredients of the KBL,” she said.

Forés noted that her quest for the best local ingredients has led her to rediscover traditions.

To prepare for a talk at Harvard on “Egg Transitions in Philippine Cooking,” she met with a family in Pateros that still produced balut or duck egg the old-fashioned way, through a brick basket.

She pointed parallels between Italy and the Philippines in food production. In a far-flung corner of Iloilo, she met a family that extracted sap from the buri palm, fermented and cooked it for six hours until it turned syrupy.

Forés said that while Italian balsamic vinegar costs 100 euros because of the long process, the buri palm syrup is priced at a fraction of the cost despite the intense labor.

“As chefs, we have the responsibility to find these artisans and farmers and also put more value into what they are making,” she said.

Forés hopes that the Philippines can develop certifications similar to those of Italy—IDP (indication of geographical protection), a label that traces food specialities to their geographical origin, and DOP (protected designation of origin), a certification that the food is locally grown and produced using traditional methods.

Through the decades, Forés has shown the ability to leave her comfort zone.

“No matter how long you’ve been in the business, there is always something new to discover,” she said. —CONTRIBUTED

Cibo celebrates its 21st anniversary with its 2-for-1 promo until Sept. 13. Order two dishes from its list of bestsellers and choose a dish from the promo menu for free.

3 Franco Pepe’s pizza. Food and Wine magazine and The Guardian cite it as the best pizza in the world. Based in Naples, Pepe is famous for using heritage ingredients, reviving ancient wheat, tomatoes and oil and for promoting artisanal products. “He uses different toppings. We had special ricotta, nuts and apricots on fried pizza dough,” said Forés.