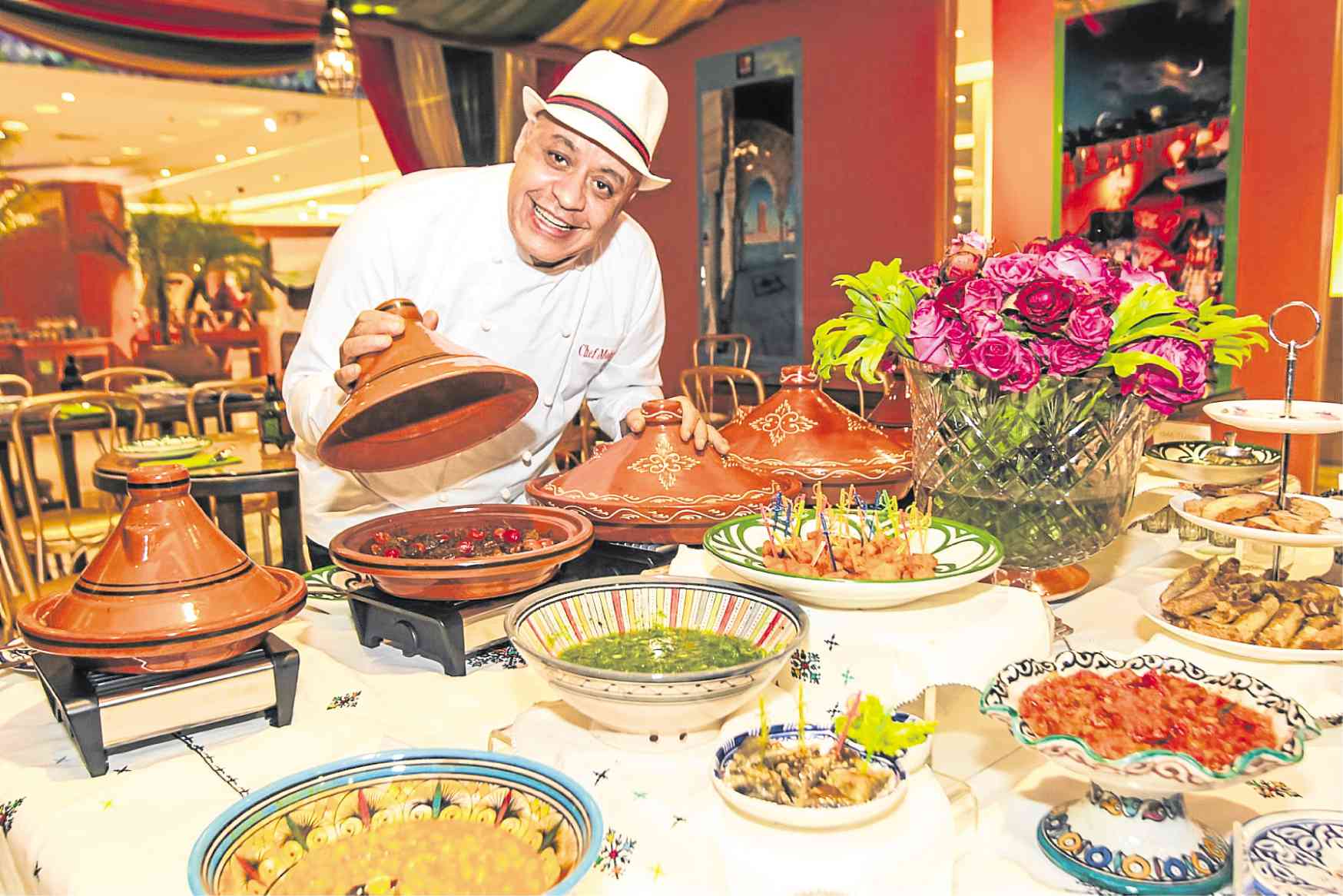 Mention couscous and tajine and what comes to mind are the rich, colorful and spice-laden flavors of Morocco.

There’s always something exciting, yet comforting, about Moroccan food—the aromatic sauces and fresh herbs and spices infused into a variety of vegetables and meat. Think tajine of tender chicken stewed with tart red olives and chopped preserved lemon rind, or the fork-tender lamb tajine paired with cherry tomatoes and onions.

Influenced by Andalusia in southern Spain, as well as ancient Arabia and France, Morocco’s cuisine boasts a rich, distinctive combination of flavors

Given this curiosity in the exotic flavors of Morocco, Rustan’s Makati has become a foodie destination. The 5th floor has been drawing people as Rustan’s celebrates the “Le Coeur de Maroc” (The Heart of Morocco) festival this entire August.

Rustan’s flew in award-winning chef Moha Fedal, hailed as the ambassador of Moroccan gastronomy, to ensure the authenticity of the dishes. Fedal brought along sous chefs, Miriam Baaziz and Fatima Namile, from his famous 20-year-old restaurant Dar Moha in Marrakech.

The experience starts with a steaming bowl of Harira (lentil soup) to warm the stomach. It’s almost similar to our monggo soup—thick, spicy and enriched with tomatoes, lentils, celery, coriander, chickpeas and slices of meat.
“It’s the first food we eat after a day of fasting during Ramadan,” Fedal said.

“One important thing we have in Morocco is time,” he said. “We have patience. We cook with patience and love. When you wait for something, the result is always better.”

Tajine is a popular clay cooking pot (with conical lid) in Morocco, where all ingredients are put together and cooked slowly in low fire.

“You have to open the lid only three times,” Fedal said. “First, to put the food inside; second, to taste; and third, to serve and eat.”

The lamb was finely cooked and easily coaxed off the bone. The meat was not gamey at all.

Tajines of different sizes are sold and available also at Rustan’s.

While the tajine dishes are the most prominent on the menu, diners also flock to the restaurant for its Briouat cheese, a savory pastry filled with zesty spinach and cheese in phyllo pastry; Calamari with White Beans; and Pastilla of Quail, a delicate Moroccan pie with almonds, quail, orange blossom water, cinnamon in phyllo pastry.

Cigar Eggplant with Almonds and Honey

Preheat oven to 180°C. Cut eggplant into thin slices lengthwise and fry in oil until they change color. Put them on paper towels.

Mix together almond paste and the essence of orange blossom. Divide the dough into as many pieces as there are slices of eggplant, then train with a small roll each piece of dough. Place each roll on the end of an eggplant slice and roll it on the dough.

Arrange the cigars on a baking sheet and drizzle them with honey. Finally, bake and cook for 5 minutes. Serve warm, decorating your flat almonds service.

Tajine of Beef with Onions and Tomatoes

In a pot, put together pieces of beef, parsley and chiseled coriander, saffron, cinnamon, 4 tbsp oil, 1 tbsp water, salt and pepper. Let it sit for 1 hour.

In medium heat, cook the mixture for 10 minutes. Add 2 c of water. Cover and bring to a boil. Cook over low heat for at least 45 minutes, stirring from time to time. If necessary, add a little water.

Meanwhile, dip cherry tomatoes 15 seconds in a pot of boiling water with sugar, salt and cinnamon sticks. Drain and set aside. In a skillet, sauté onions with 1 tbsp oil, butter, cinnamon, salt and granulated sugar. Let it caramelize over low heat.

Arrange the pieces of ham in a tajine, cover small caramelized onions and cherry tomatoes. Top with sauce and serve immediately.