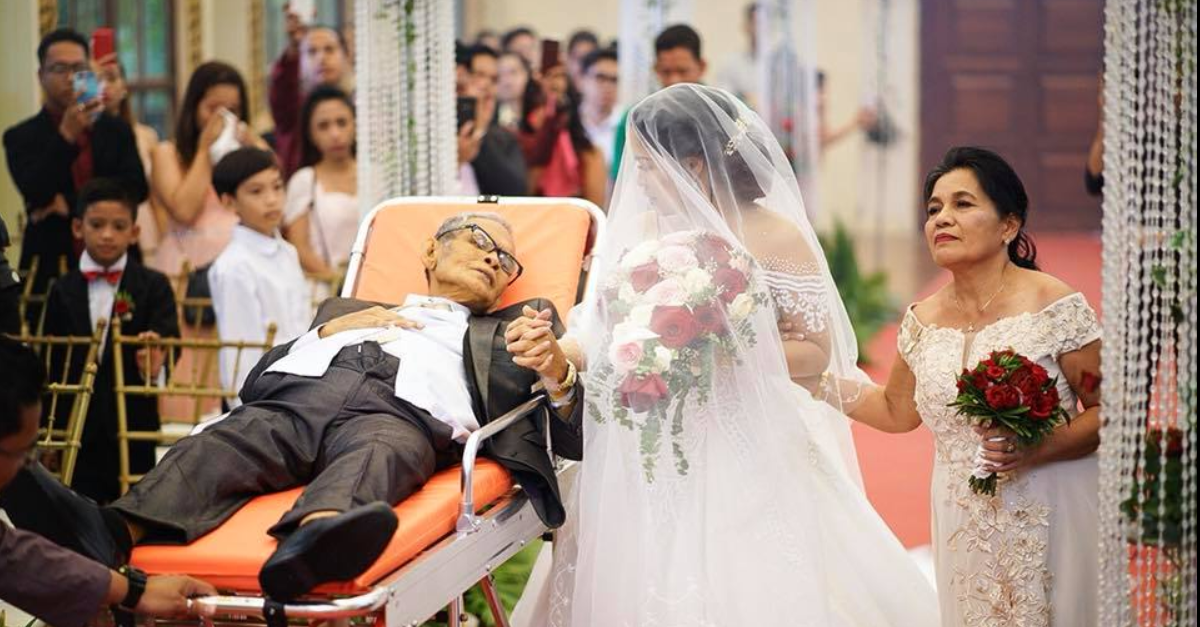 The tradition of a father walking his daughter down the aisle has become much more than giving the bride away. It has since become a special and emotional moment shared between father and daughter during a life-changing milestone.

One father brought new meaning to this time-honored tradition when he accompanied his youngest daughter on her special day while he was ill and bed-bound.

A picture of the walk simply captioned “A Father’s Love” posted on Aug. 9 quickly went viral and currently has 22,000 likes and 15,000 shares as of this writing. The picture was captured by Law Tapalla Photography, the official wedding photographer.

The bride, Charlotte Gay Villarin, has her fingers laced around those of her father who, despite being weak, looks lovingly at his daughter from a stretcher, which is being pulled down the aisle. On the bride’s left side is her mother.

It was revealed in an interview with Coconuts Manila that Papu Pedro Villarin, 65, had advanced liver cancer .

Villarin said her father was supposed to go down the aisle on a wheelchair. But because he was so weak on the wedding day, he had to be brought down from the ambulance they hired via stretcher.

Paradox Films, which documented the wedding through video, shared that Tatay Pedro or Papu called his daughter “Love.” The first part of the video pays tribute to him, proving that the wedding was as much as his as it was the couple’s.

Charlotte booked us less than 2 months before their wedding (original date was December) and when we found out the story behind the sudden change of the date, we were heartbroken. We thought we were ready. But nothing prepared us to what we have witnessed that day. It was a day filled with extreme emotions. It was surreal filled with poignancy, that felt like we were all in the same dream or a movie set.Tatay Pedro or Papu to his family, a loving father with a tremendous zest for life could not let his illness stop him from fulfilling his dream. His greatest wish, is to walk Charlotte who he fondly called Love, his youngest daughter down the aisle on her wedding day. It was an unforgettable moment and the most incredible one we've ever had the honour to witness.Papu Pedro, this is for you…Maku & Charlotte's WeddingVideo: Paradox FilmsPhoto: Law Tapalla PhotographyCoordination: Events Management Services by Anna Sotto | Anna Liza Sotto Events Management Services MUA: Carissa Cielo MedvedHair: Arci Sonio BarcenasCake: Cake Mapping PhilippinesFlowers: Flowers Of May and Event StylingChurch and Reception: Palazzo Verde

Villarin admitted in a Facebook post last Aug. 10 that the wedding was “not as happy as it should be,” considering her father’s condition.

From a December wedding, the date had to be pushed back to August due to her father’s weakening state. She shared that aside from the stress of wedding planning within a month, “sleepless nights” were also spent taking care of her father who was “in and out of the hospital.”

Still, there was much happiness on the occasion. “As I always say, this wedding is not just for me and for Maku. This wedding is mostly for my papu. He’s been waiting for this moment, and finally we made it. His dream of walking with me to the altar became so possible by the grace of the Lord.”

Exhausting as the experience was, the expedited preparations were well worth it. Villarin announced on Tuesday, Aug. 14, that Papu had passed away. It seems this father knew he had one last mission before breathing his last—to testify for undying love.  /ra