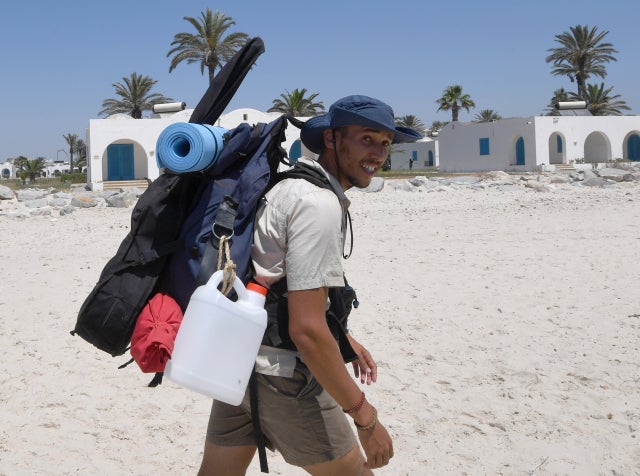 Bin bags at the ready, “long-distance activist” Mohamed Oussama Houij moves methodically along a beach in Tunisia’s Mediterranean town of Nabeul, scooping up all kinds of trash as he goes along.

The 27-year-old sanitary engineer set out in July to walk a 300-kilometer (185-mile) stretch of coastline in northern Tunisia and clean up 30 beaches along the way.

He hopes the two-month trek will help convince authorities, holidaymakers and average Tunisians alike that the sea should not be used as a giant landfill.

With a sturdy pair of boots and a hat to shield him from the summer sun, Houij began his journey in the central coastal city of Mahdia and plans to finish in Solimane, 40 kilometers from the capital Tunis.

The trip will take him through crowded hotspots like Daar Chaabane in Nabeul, but also along secluded coves and shores.

“I believe in citizen mobilization and I chose to act… and to raise awareness about the problem of pollution on our beaches,” the activist told AFP.

The Facebook page of his “300 Kilometers” campaign has more than 13,000 followers and is entirely independent, he boasted.

“No political party is welcome… 300 Kilometers is a free citizen initiative and will remain forever,” the activist wrote on the page.

But while Houij may be a dreamer, he is also realistic.

“The 300 Kilometers action is not really about cleaning… I know I’m just a drop of water in the ocean,” he said.

“I want to raise public awareness and get people thinking: ‘Wait, it’s not normal, all these bottles, these caps… all these plastic bags’.”

Since Tunisia’s 2011 revolution, the proliferation of waste has steadily worsened across the country — in big cities, rural areas and beaches alike.

One contributing factor has been the absence of elected municipal councils.

Between the fall in 2011 of longtime dictator Zine El Abidine Ben Ali and local polls held in May 2018, town halls were managed by “special delegations” that often neglected issues like littering and waste management.

But there is also a lack of environmental awareness among Tunisians, Environment Minister Riadh Mouakher said in mid-2017 as he announced the launch of a special “green police” unit to combat the North African country’s rubbish woes.

At his first beach stop, Oussama estimates he collected about 100 kilograms (more than 200 pounds) of waste. After that, he simply stopped weighing the bags.

Nearly 150 kilometers and 14 beaches later, Houij is astounded by the sheer volume of waste he’s found along the shore.

“We’re talking tonnes of rubbish… The more you clean, the more you find. It never ends,” he said.

From plastic bottles and soiled diapers to commercial refuse, Oussama says he’s seen “all forms of pollution” seeping into the sea.

“I’ve seen a wide array of pollution, from the personal pollution of people who come to the beach through to the industrial pollution” of local and public companies, he said.

“The authorities do not take the problem of pollution in Tunisia seriously,” said Houij.

The environmental activist is also frustrated with holidaymakers who treat him as a “zabel” (rubbish collector) and don’t hesitate to ask him to pick up their waste.

Traveling with nothing but a rucksack and a guitar, on lucky nights he is offered shelter and a bed. Most nights, though, he sleeps rough.

Reactions from those he meets along the way range “from one extreme to another”, he said.

“There are people who are very active, who encourage you and who help you clean up… but others kill your desire to work for the cause,” he added.

“Each day brings enough trouble of its own, but the will is there… there’s no reason for me to stop.” AB