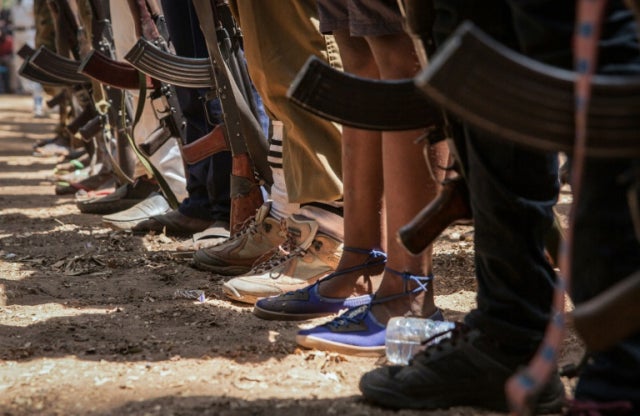 For the child soldiers in South Sudan, throwing in their lot with the militias is one way of finding food and security in a dangerous environment. Image: AFP/Stefanie Glinski

By the time Baba John escaped the tribal militia he had joined as an 11-year-old, he had long stopped counting the number of people he had killed.

“I shot people. We all did,” said Baba John. “I received a gun and was told how to shoot and point the gun. I don’t remember how many I shot but there were many.”

A murderous time for Baba John began with a life-or-death decision when a South Sudanese armed group, known as the Cobra Faction, attacked his village close to the eastern town of Pibor, nearly 400 kilometers (240 miles) north of the capital Juba.

Baba John survived that attack but, fearing he would not be so lucky the next time he decided, like many others have done, to join the militia.

“I was forced to shoot and loot,” recalls Baba John of the year spent with them.

Now aged 15, Baba John found salvation in a program run by the UN children’s agency, UNICEF, to give child soldiers a chance of a new life even as recruitment, press-ganging and outright abductions continue.

During nearly five years of civil war in South Sudan an estimated 19,000 children under the age of 18 have joined the ranks of the army, rebel forces or various local militias, UNICEF says.

From killing to farming

Baba John returned home to his mother and five siblings in the ill-fitting clothes of his victims.

Pibor lies in an open plain, a ramshackle town with a dirt airstrip, where the biggest building is a hangar-sized tent to contain the sacks of emergency food that fend off starvation.

Today, despite the ongoing conflict and difficult living conditions, Baba John is hopeful.

Barefoot and slim, dressed in a neat striped shirt and a beaded bracelet, and with a grin on his face, he is now a fledgling farmer, learning to plant, raise and harvest crops.

“I want to become a farmer so I can help my family,” he says.

The focus provided by a structured education program and the learning of new skills helps with the psychological recovery of former child soldiers, says Muraguri Wachira of Vets Without Borders (VSF) Germany, a charity that runs the program in Pibor.

Baba John still has nightmares but, like others, he is beginning to imagine a future without fighting.

Six years ago, aged just 10, Martha, joined Cobra together with her mother.

“Almost my whole village went to the bush during that time,” she says, explaining that hunger and insecurity left civilians with little option but to seek the protection of an armed group.

For years she worked as a porter and cook for the militia fighters.

Later, when she and her mother returned to their village, they found barely a trace of their previous lives. “Our house wasn’t there. It was burned and we had to start all over,” she says.

Martha’s dream now is to become a driver and she hopes never to return to the militia.

But it is not so easy.

Life is tough in South Sudan at the best of times, and now, in the midst of yet another long and destructive civil war, is one of the worst.

For many child soldiers, joining a militia is simply a pragmatic choice of survival.

“It is still not safe here and we don’t have enough to eat,” says Baba John.

“I know many people who returned to the bush,” says Martha. “They were hungry and didn’t see hope.”

Thomas, now 18, has been in and out of armed groups for years.

“I’ve seen it all: fighting, killing, looting,” he says.

Thomas dreams of becoming a local government official, advocating for children’s rights, but if life has taught him one thing, it is that nothing is certain.

“I don’t want to go back to the militia,” he says.

“But in South Sudan, you never know what happens. We could be attacked again and then there are only a few options: we can run, hide or fight back.” CC