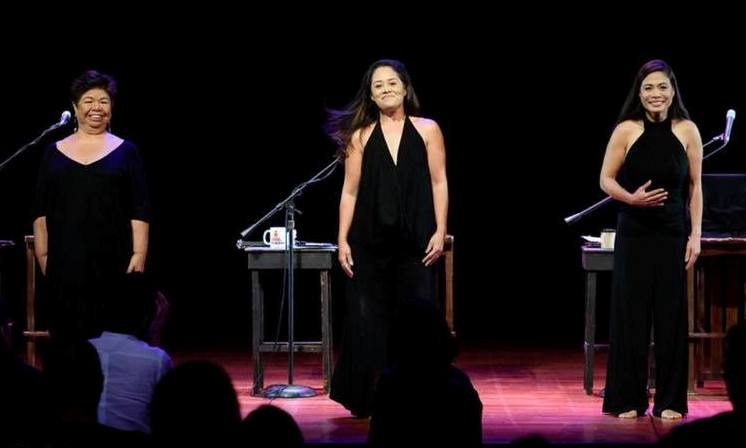 The proudly feminist play, which premiered in the late 1990s, smashed taboos with its frank, honest talk about women’s genitalia as a symbol and vessel not only of female sexuality, but also of women’s rights and their hopes, fears, aspirations and struggles.

In New Voice Company’s (NVC) latest iteration of “The Vagina Monologues,” director Thea Tadiar infused a more contemporary context to the proceedings with brief audio-visual references to recent news like the #MeToo movement and Mocha Uson’s controversial video on federalism.

While this cultural catch-up was appreciated, the monologues, of course, would have to stand and fall on the performers acting them out on stage.

The acting triumvirate in this production, clad in black, was composed of Missy Maramara, Mae Paner and Monique Wilson, whose NVC was responsible for introducing TVM to Manila audiences two decades ago. Wilson also appeared in the first Manila production, with Dulce Aristorenas and Tami Monsod.

The monologues in that performance were divided evenly among the three actresses. This time, Wilson generously ceded much of the stage to her co-performers. She did the interweaving narration and took on the climactic confession of a smart sex worker—a monologue that always brings the house down.

Like a radiant hostess revealing this scintillating world to returning devotees and newcomers alike, Wilson graciously allowed Paner and Maramara ample opportunities to shine as well.

Paner projected raw courage and bombastic flair in her many characters. Her pieces also evoked the broadest humor. This homogenous approach worked in some monologues, like the personalized rants of “My Angry Vagina,” or the defiant awkwardness of a repressed senior citizen in “The Flood.”

But the required softness failed to surface at times, such as in “Because He Liked to Look at It.” It was as if Paner was playing the same character over and over, though undergoing different nerve-wracking and joyful experiences.

Maramara simply soared by expertly bringing to life many different personas in the span of several heartbeats. The humor and pain she drew out from each monologue was natural and chameleonic—from the rape victim in “My Vagina Was My Village” to the sexual awakening and liberation of an abused child in “The Little Coochie Snoocher that Could.”

Maramara aptly ended the play as a doting but still in-control grandmother in “I Was There in the Room.” Her reliving of her own grandchild’s birth evoked the sense of wonder, gratitude and pride that any human being, regardless of gender, should feel at seeing firsthand how an often maligned body part becomes central to the creation of new life.

Eve Ensler’s “The Vagina Monologues,” produced by the New Voice Company, will have a restaging in Manila in December. Titled “V20 Asia Rising,” it will have Ensler and various international VDAY artists and activists making appearances. Call 8966695, 8990630.