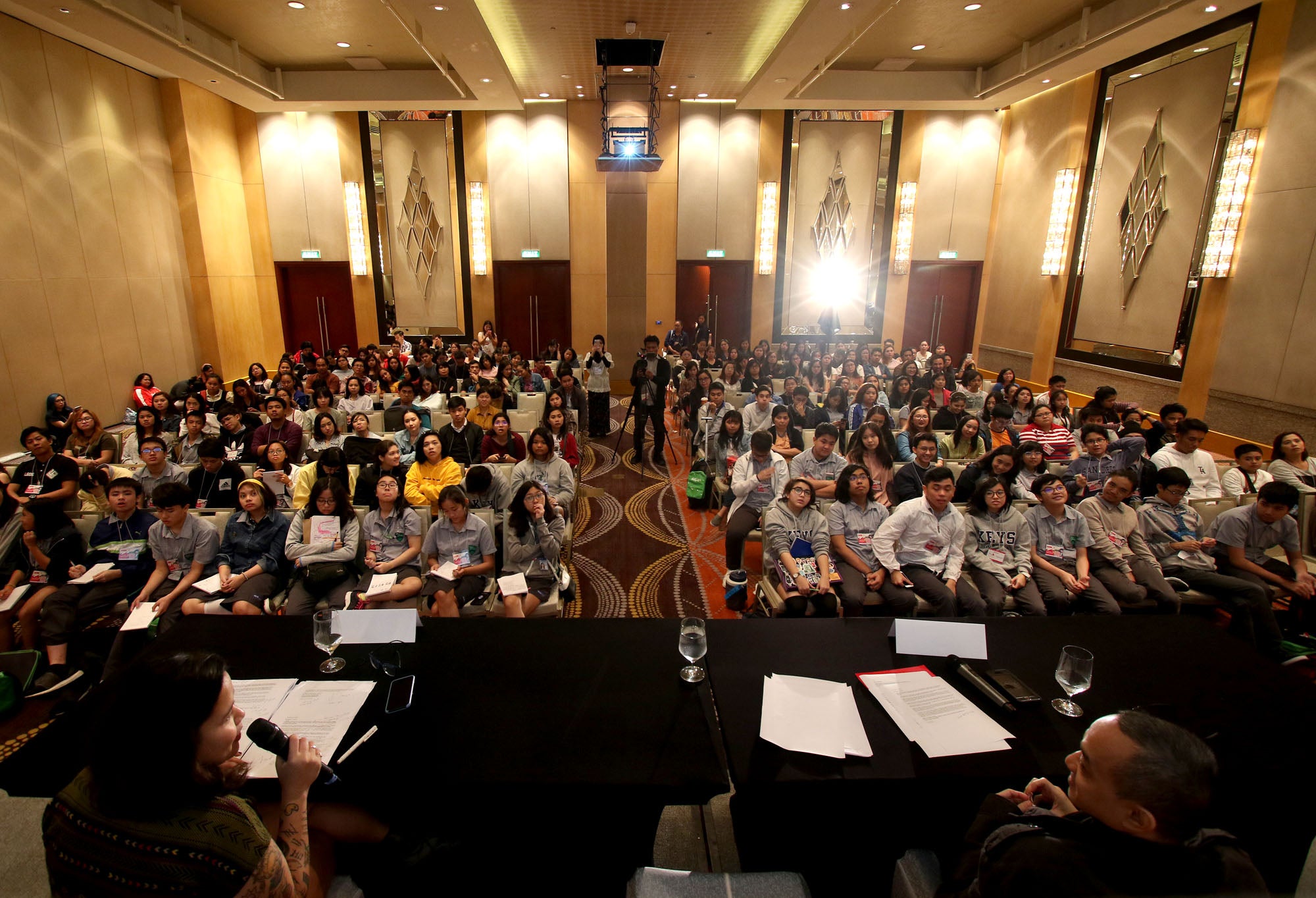 The standing-room-only crowd at the Young Blood Workshop. PHOTOS BY RICHARD A. REYES

Please drop the “S” at the end of each word and remove yourself from the crime many nonnative English speakers (and writers) are guilty of.

Stuff, furniture, equipment, luggage and aircraft are collective nouns—at least the ones often (mis)used—and will always be spelled as is.

“Let that be your takeaway from this panel if only one lesson sticks to your mind,” said editor-author-lifestyle reporter Pam Pastor, a panelist at the Inquirer Young Blood Workshop during the recent Philippine Readers and Writers Festival (PRWF).

Organized by National Book Store at Raffles Makati, the fifth edition of PRWF had an entire weekend of engaging events for book lovers, writers and authors.

Pastor was accompanied at the workshop by Palanca award winner Ruel S. De Vera. Both are editors of the “Young Blood” books and are at the helm of Inquirer’s pop-culture beat as section editor and associate editor, respectively. They critiqued presubmitted first-person nonfiction essays, offered practical writing tips and answered questions not usually addressed in the schoolroom.

The constructive criticisms also had input from the broadsheet’s new Opinion editor Gibbs Cadiz, who was held up at work and thus couldn’t join the panel. Cadiz, Inquirer’s former Theater section editor and Lifestyle deskman, is now in charge of sifting through hundreds of submissions for the thrice-a-week Young Blood column.

Young Blood publishes essays from 29-year-olds and younger. Some pieces end up on the pages of the best-selling namesake anthology, whose sixth book was released just last year.

The essays are gauged not just by any random yardstick.

“First, we look at craft, meaning you must write it well,” said De Vera. “Second, it must be an original authentic experience. We want to see something in the work… that you are unique in experiencing it.”

Here’s a recap of lessons from the Young Blood Workshop at PRWF:

The rules of grammar

For our educators, if there’s one aspect to control in teaching how to write in English, make that strictly enforcing the rules of grammar on your wards.

How to keep readers hooked

“It’s really hard to keep people’s attention, especially now with all the distractions… the stuff that’s out there for people to read and consume and enjoy,” Pastor said. What could stop them from picking up their phones and checking Instagram instead?

The problem with endings

“Sometimes you need to sleep on it, take a shower, or just switch to doing something else. There might be something you need to get out of your system before finishing the writing. Sometimes, it’s just not ready to be written… Writing should not be punishment for you. If it is, then think about how it’ll be for your reader.”

On reading (a lot): “Read the stuff that you think is good writing, because that will infect you,” said De Vera.

But, Pastor clarified, reading your favorite writers doesn’t mean aping their styles, too. One should read as a writer, taking note of what in the author’s writing style appeals to you.

On writer’s block: “Sometimes all you can do is put it down on paper,” Pastor said. “What stops you is the pressure of waiting for perfection to pour out of you, but it doesn’t always happen. Sometimes sentences don’t come in the right structure yet, so that’s where stream-of-consciousness writing comes handy. But… you have to [eventually] shape it into something readable, enjoyable and something that flows.”

On bad writing habits: De Vera, who teaches in university, said the bad habits were an effect of forcing students to write in a uniform way in the classroom.

“It’s very important for students to feel like they have control over how they write,” he explained. “Teachers should enforce the rules of grammar strictly, but loosen up in terms of what students write about. Also, let students sound like students.”

On beating deadlines: It helps to bribe oneself to get the writing done immediately.